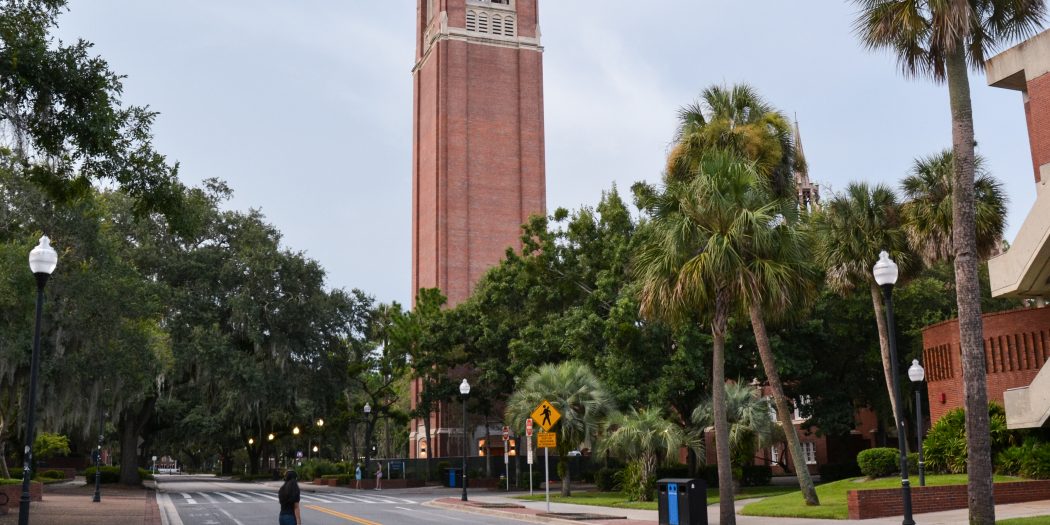 The iconic Century Tower stands in the middle of the University of Florida campus in Gainesville, Florida, taken July 22, 2021. A bill was approved Tuesday that would require colleges and universities to change accrediting organizations at the end of each accreditation cycle after the current accreditation agency became involved in two high-profile issues at Florida universities last year. Photo by Houston Harwood/Fresh Take Florida.

TALLAHASSEE — A Senate bill approved Tuesday would require colleges and universities to change accrediting organizations at the end of each accreditation cycle, a proposal that drew skepticism from Democrats.

The Republican-controlled Senate Education Committee voted 6-3 along party lines to support the bill (SPB 7044), which came after the agency that accredits all of Florida’s state colleges and universities became involved in two high-profile issues at universities last year.

The bill would prevent colleges and universities from being accredited by the same agency for consecutive accreditation cycles. An overview of accreditation by the Congressional Research Service said renewal “takes place on a cycle that may range from every few years to as many as 10 years.”

The Southern Association of Colleges and Schools Commission on Colleges is the accrediting agency for Florida’s higher-education institutions.

Corcoran is a member of the state university system’s Board of Governors, which ultimately has to approve new university presidents. Wheelan wrote in a letter that the accrediting agency would “find the institution out of compliance” with the agency’s rules if Corcoran didn’t step down from the Board of Governors.

Syd Kitson, who at the time was chairman of the Board of Governors, later rebuked Wheelan’s comments.

“She should have done her homework,” Kitson told members of the Board of Governors in June. “It was clear she was not aware of this board’s regulation on a presidential search and selection process or how voting conflicts are addressed under Florida’s code of ethics for public officers.”

The accrediting agency in November also demanded an explanation from the University of Florida amid a controversy stemming from a decision to deny permission to three professors to to be hired as expert witnesses in a voting-rights lawsuit. The controversy ultimately led to UF administrators walking back the decision to deny permission for the professors to serve as witnesses.

But any tension between Florida higher-education leaders and the accrediting agency didn’t come up in Tuesday’s Senate committee meeting.

Bill sponsor Manny Diaz Jr., R-Hialeah, pointed to a rule change at the federal level that went into effect in 2020. The change, in part, broadened the geographic areas that accreditation agencies can serve.

“In this period of 10 years (or) whenever their accreditation is up, they would have to go to a different accreditor,” he said. “This goes along the lines with the changes that were made at the federal level in which the deregulation of the geographic boundaries for all regional accreditors in the United States have been removed, and they can accredit schools regardless of their geographic location.”

But Sen. Lori Berman, D-Delray Beach, questioned why the bill would force institutions to make changes.

“Just because it’s available from the federal government, doesn’t mean that they have to do it. Other than the availability, is there any real reason why we would be requiring universities to change their accrediting agency?” Berman asked.

Diaz replied that it is “always good to have a different perspective.”

“When you have been with the same accreditor, there are things that can be learned. And a different perspective from a different regional accreditor would be helpful to our universities,” Diaz said.