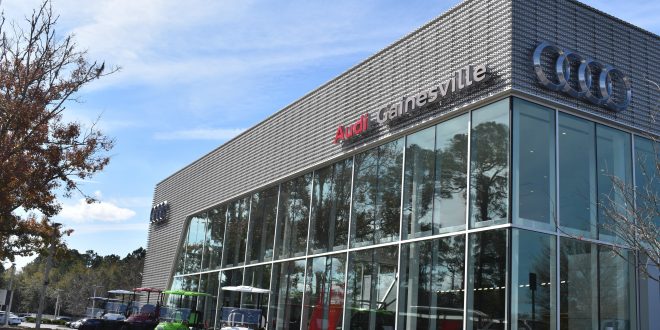 Automotive experts at Audi Gainesville have experienced a dramatic cut in car inventory that is expected to last for another six months. (Denisse Flores/WUFT News)

After frustrating visits to Alachua County dealerships and five months of searching, Roy Roca, 20, opted to buy a used car from a friend.

“If I wanted a car, they wouldn’t have more than one option, so I had to go to other counties to look for the model,” he said.

Car dealerships across the country have experienced three-month delays for vehicles due to an industry-wide microchip shortage. Cars contain two to three dozen microchips, which control technology ranging from window motors to navigation systems. The scarcity of this component has made this the worst time to buy a car as prices soar and production decreases.

Roca had his sights set on a new Honda. The vehicle, however, costs triple the amount it regularly would.

“Right now, used cars are around the same price as new cars,” he said. “There’s not a lot of variety.”

Chris Hinton, 24, experienced similar issues. He has been carless for around four months and hopes to find a good vehicle soon.

“Everywhere I look seems to be very expensive due to the fact that there’s just not a lot of cars at the places that I’m looking, so it looks like I’m going to be spending a lot more than usual if I were to start looking for a car,“ Hinton said.

Taylor Mowery, a salesperson at Volkswagen of Gainesville, said the dealership only has one new car on the lot and expects five to arrive within a month to two months. Sales at the dealership have decreased by half in the last year or two.

“There is such a shortage on parts and the supply chain issues, things being stuck on ships, tied up in ports, trying to get clearance, trying to get things shipped over,” Davis said. “Things that would take two or three or four days before are now taking several weeks or even months.”

Davis added that anyone who orders an additional car key must get approval from Audi due to the microchip scarcity.

“At this point now, they are literally having to show that they have either lost a key or their key is broken,” he said.

The dealership has also struggled to get cars, said Michael Potapow III, an Audi brand specialist.

“Normally, we have about 100 new cars,” he said. “We’ve gotten down to as low as two, so it’s just been hard to find things to sell. Customers are having a hard time getting exactly what they want because a lot of people have to compromise.”

Leandro Claros, finance manager at BMW of Gainesville, said he has noticed that a lot more people come from out of town — and even out of state — to purchase their cars.

“The other day there was a lady that actually bought a car from Minnesota,” he said. “The car wasn’t available anywhere else.”

As a result of the microchip shortage, car manufacturers are removing features, such as touch screens, gesture control and heads-up display on newer 2022 models, Claros said. They are now reserved for higher trim levels.

Audio story below by Gabriella Mercurio for WUFT-FM:

Diego Esis, a sales associate at Gatorland Toyota, said the dealership was always used to having 150 new cars on the lot. Now, it is down to 12 or 20 at most.

“The way that people are shopping nowadays is through deposit so they are basically shopping for a vehicle that they don’t even have in sight, so that’s pretty inconvenient for the customer,”  Esis said. “Also, the prices of vehicles hovered through the roof, obviously because of the shortage and used vehicles are almost as much as new vehicles.”

As potential car buyers navigate these unprecedented times, experts in automotive technology like Davis are advising them to wait. Inventories won’t build back until around October.

Denisse is a reporter for WUFT News who can be reached by calling 352-392-6397 or emailing news@wuft.org.
Previous Senate effectively ends efforts to overturn Florida’s ‘free kill’ law protecting doctors in malpractice lawsuits
Next Research on glaciers in Florida? Yes, and a UF professor is using machine learning to do so