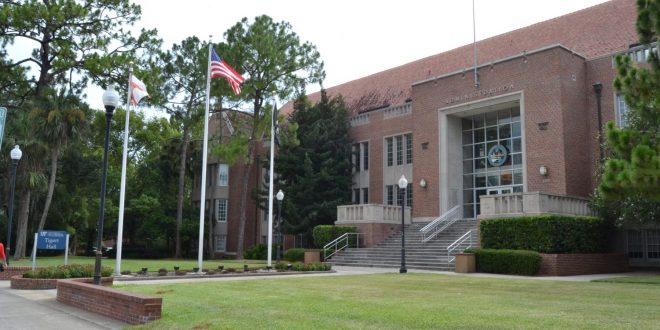 Allegations of politically motivated infringements on academic freedom at the University of Florida have ignited controversy. (WUFT News file photo.)

The University of Florida prides itself on ascending to a top-five public university but in recent months, allegations of politically motivated infringements on academic freedom have ignited controversy and made their way to courts and Congress.

Open discourse has a checkered history on campus.

Throughout the university’s history, administrators have terminated or forced the resignation of professors whose ideologies were revolutionary for their time and went against the state government. Some professors say the most recent examples fall in line with a pattern of academic repression.

Earlier this year, three renowned UF political science professors were barred from testifying as expert witnesses in a voting rights lawsuit against Florida Gov. Ron DeSantis’ administration, despite having done so in the past. While this decision was reversed, it wasn’t an isolated incident. A law professor was told that he couldn’t use his affiliation as part of signing an amicus brief for a similar lawsuit. A medicine professor was also forbidden from using his expertise to participate in lawsuits about mask wearing to protect against COVID-19.

“Defendants must take no steps to enforce its conflict-of-interests policy with respect to faculty and staff requests to engage as expert witnesses or provide legal consulting in litigation involving the State of Florida until otherwise ordered,” Walker said.

Professors came forward about a culture of fear that pressured them to destroy research on COVID-19 and delay publication, according to a Senate Faculty report. UF spokeswoman Hessy Fernandez did not answer questions about general academic freedom matters.

And a UF education professor revealed he faced backlash after including the words “critical” and “race” as part of a curriculum description. Critical race theory — which has a strict academic definition as a framework for studying structural racism and has been around for more than 40 years —has come under attack from conservatives over the past year.

Attacks on academic freedom have historically occurred during periods of social stress, and they often come from the political right against the left, UF archivist Carl Van Ness said. In UF’s history, professors have been fired or reprimanded after speaking about slavery, wars, communism and, recently, critical race theory in ways that didn’t align with the state government’s ideologies.

In previous noteworthy examples at the university, the administration has worked in tandem with the state government in silencing professors.

Restricting professors’ academic freedom is more common in Southern schools than any other U.S. region, he said.

From 1956 to 1965, the Johns Committee investigations are regarded today as an infamous example of academic freedom violations. The Florida Legislature was looking for connections between communism and the civil rights movements. But the “red menace” turned into the “lavender menace” when gay students and faculty were persecuted, and the university fired at least 15 professors for their sexuality.

A few years later, medicine professor Marshall Jones was denied tenure after advising an equal rights advocacy group in which students staged the first anti-Vietnam war demonstrations at UF. Ken McGill, a philosophy professor and an avowed Marxist, was also denied tenure for his political views.

These cases were part of a trend of chastising professors with revolutionary views for the respective time periods, both at UF and nationwide. Enoch Banks, the earliest known example, was a UF history professor who affirmed in 1911 the Civil War’s origins were rooted in slavery rather than states’ rights, Van Ness said. He was ousted after pressure from the Daughters of the Confederacy, which had powerful influence over the government.

After his private letters were confiscated by the U.S. Postal Service, sociology professor Newell Sims was told to resign for writing his opposition to American involvement in World War I. Social sciences professor John Reynolds similarly had to step down after not participating in hearings during the McCarthy era after World War II, Van Ness said.

UF English professor Malini Johar Schueller, who has written about academic freedom, said the current discourse reminded her of a post-9/11 list that compiled the 100 “most dangerous” professors in the U.S., which included anyone who criticized American foreign policy.

“The history keeps repeating itself,” she said.

Instead of slavery or Marxism, current scholars are under scrutiny for critical race theory and COVID-19 precautions. Critical race theory became the target of attacks in December when UF education professor Christopher Busey outed college administrators who told him a curriculum that included “critical” and “race” as part of a description would not be approved, according to a press release from the UF chapter of the United Faculty of Florida.

Similarly, UF College of Arts Dean Onye Ozuzu said her school faced backlash for a strategy proposal that included how to “establish equity and facilitate the active participation of historically marginalized peoples and cultures in our curriculum, practices and daily work.”

“We are not engaged to serve political agendas but to conduct research and teach for the benefit of the people of the state of Florida and our fields at large,” she said in a statement.

Last March, the Florida Legislature passed House Bill 233, which requires campus-wide surveys on the basis of “intellectual freedom and viewpoint diversity.” It was considered an attack on progressive viewpoints from the conservative majority in power. Non-tenured professors felt particularly threatened by the bill.

Faculty who teach about race and racism noted insufficient engagement with the subject, decreased academic connection, lack of institutional protection, a need for greater institutional support and a reactive response to race issues, according to research on UF race scholars published in the fall of this year.

Events from 2020 in the Levin College of Law foreshadowed the current climate at UF. Law professor Michelle Jacobs’ class on critical race theory was canceled until uproar from students led to it being reinstated.

The law school wanted to become a model of in-person teaching during the COVID-19 pandemic before vaccines were distributed, but Jacobs and many others couldn’t teach in person due to medical reasons.

But now some professors are asking: at what cost?

Faculty and staff of color feel especially threatened. The university, which already has relatively low numbers of non-white students and faculty, according to enrollment and staff data, should be threatened by people of color leaving UF or not applying for future jobs, Jacobs said.

Jacobs, for one, has had enough. For this reason, she retired in December.

“I’m retiring because the state is trying to go back to the 1930s and 40s…” she said. “I have worked the entire time I’m at UF to help bring the institution forward out of its segregationist past. Now, it’s clear the state wants to go back to a time when Black and brown people weren’t present at the university.”

Another UF law professor, Kenneth Nunn, said he was told he could not sign onto an amicus brief – something lawyers do often demonstrating their expertise and opinion on a subject – with UF as part of his affiliation. The lawsuit related to felons paying a fine before voting and was filed against DeSantis.

He and some of his colleagues agreed that there is less faculty autonomy among law professors recently and more red tape around processes that used to be routine.

A task force formed at the behest of the university’s president recommended turning back on controversial statements, but the academic freedom chapter is not over in Gainesville. UF’s accreditor is currently investigating the university, having mentioned potential deviation from its academic freedom standard. And a bench trial date for the three original professors is set for Nov. 7.

April is a reporter for WUFT News who can be reached by calling 352-392-6397 or emailing news@wuft.org.
Previous Columbia basketball coach Steve Faulkner travels a long road to a school record
Next Rising GRU rates pose problems for Gainesville residents