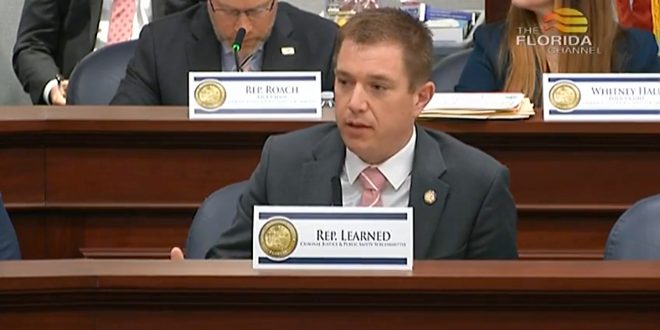 Florida’s Legislature is considering proposals to keep secret details about the deaths of children who die in domestic violence cases, in deference to the mother of two young boys murdered last summer by their father.

Minde Reinhart, 42, of Gainesville told lawmakers in Tallahassee she never wanted to learn details about the deaths of her sons, Rex, 14, and Brody, 11. Her estranged husband, Paul Reinhart, fatally shot them in May at the family’s vacation home in Dixie County before setting fire to the home and killing himself.

“From the second they walked in and told me what had happened, I made it clear to all my friends and family that I did not want to know any of the details of their murders,” she said in testimony last week to state lawmakers, holding photographs of her sons.

Minde Reinhart, who is fighting with her brother-in-law in federal court over a $4 million life insurance payout in the case, said news coverage of the boys’ deaths was upsetting, adding: “I found out just from reading the headline way too much that I never wanted to know about my sons’ deaths. It was an awful experience.”

Under Florida law, autopsies are government reports that can be released to anyone who requests a copy under the state’s public records law.

In the Reinhart case, the boys’ autopsies revealed that their father had shot both sons before he shot himself and set the fire – even though Minde Reinhart had initially assured a sheriff’s dispatcher that her husband did not own any guns during the frantic hours when authorities were still searching for her missing family.

Sheriff’s investigators also believed Paul Reinhart didn’t have a gun, based on their review of recent firearms transactions. The case has raised questions about whether police can reliably determine in a developing crisis whether someone has a gun.

Authorities in Dixie County, who led the investigation, have not completed a final report in the case, or explained where Paul Reinhart got the gun or whether it was obtained legally.

In an unusual move, Minde Reinhart’s lawyer had requested in August that news organizations refrain from publishing any details about the boys’ deaths from the autopsy reports being made public because it would be too upsetting. The family was prominent in Gainesville’s social and political circles, and Brody Reinhart regularly served as the unofficial batboy for the University of Florida baseball team.

At the time of the boys’ autopsies, investigators had not yet released any details about how the boys died. Most coverage of the newly released autopsies focused on the disclosure that Paul Reinhart had shot the boys without graphic descriptions. A local television station went further, detailing in a brief news article published on its website how many times and where on their bodies each boy was shot.

Clemons, who described himself as a Reinhart family friend, said his bill would allow surviving parents to review a child’s autopsy but otherwise prevent it from becoming public.

“News outlets from around the country – you know the adage that, if it bleeds it leads – they were quick to jump on this, and they ran story after story about the release of the medical examiner’s report, some of which included very descriptive details about how those two young, innocent boys were murdered,” Clemons said.

At a legislative hearing last week – with Minde Reinhart in the room – Clemons himself told House lawmakers how many times each boy was shot and where on their body, citing the autopsies and a television news report.

“The grieving mother was unable to avoid this news,” Clemons said.

“I knew that they died of gunshot wounds,” Minde Reinhart said, “and that was the extent that I wanted to know.”

During the hearing, Rep. Andrew Learned, D-Riverview, asked whether the same restrictions on autopsies should apply to young victims in school shootings or other crimes. Clemons said the bill was trying to focus narrowly on one circumstance of violence. He said parents could choose to release the information publicly, even under the proposal.

“We were not trying to make a gaping hole in that public records law,” Clemons said.

The effort to keep secret details about the deaths of children in such cases would limit the public’s ability to oversee investigations of domestic violence, said Virginia Hamrick, a lawyer with the Florida First Amendment Foundation, a Tallahassee group that advocates for government transparency.

“There’s just less knowledge the public would have,” Hamrick said.

Meanwhile, in federal court, Minde Reinhart and her brother-in-law, Konrad Reinhart, 45, of Gainesville, have asked a federal judge to determine whether Paul Reinhart properly updated his life insurance policies on April 26. He intended to remove his wife as the beneficiary and replace her with his brother. Paul Reinhart submitted that paperwork to the insurance company just nine days before the killings.

Paul Reinhart had also updated his will just weeks before the killings to prevent his wife from receiving any of his assets after 19 years of marriage. Minde Reinhart also filed a claim in September for $10 million against her husband’s estate.

In newly filed court records, Konrad Reinhart accused his sister-in-law without citing any evidence of “one or more” extramarital affairs, and reported that the couple had separated early last year.

According to investigators, Paul Reinhart’s final texts to his estranged wife said, “You should have put your family first. Now it’s too late. You’re so selfish. You’re going to live with this the rest of your life.” Authorities had not previously offered any explanations for the subtext of those messages.

Konrad Reinhart said in court papers that Minde Reinhart told her husband she was planning to divorce him, and that a divorce lawyer advised Paul Reinhart to change his will and life insurance policies.

That federal case was scheduled for a jury trial in November.

In a related case in Alachua County Circuit Court, Konrad Reinhart asked a judge to order Minde Reinhart to turn over all communications between the married couple during the last six months of Paul Reinhart’s life. She protested that the request was too broad.

In her own court filings, Minde accused Konrad Reinhart of re-inserting himself in his brother’s life in the spring, when the couple’s medical device sales company was crippled as she said a key supplier ended its relationship with the company. She accused her brother-in-law of coercing and pressuring her estranged husband to cut her out of their lives.

This story was produced by Fresh Take Florida, a news service of the University of Florida College of Journalism and Communications. The reporter can be reached at annawilder@freshtakeflorida.com