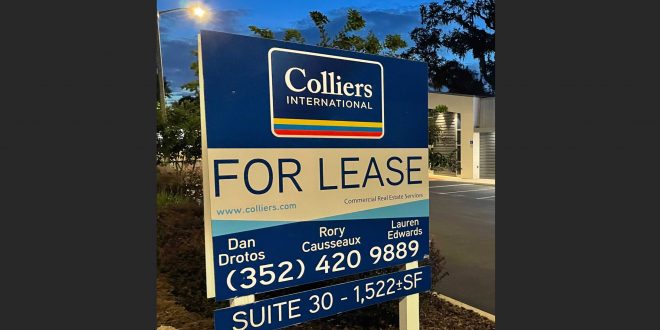 By Anna Wilder and Houston Harwood

State prosecutors on Tuesday formally charged two prominent real estate brokers with felony criminal charges of racketeering, fraud and stealing trade secrets as part of a long-running investigation into a business dispute with their former employer.

The men, Daniel James Drotos, 34, and Michael Steven Ryals, 65, were the same brokers who faced scrutiny last year over a controversial multi-million dollar land deal for the Alachua County School Board.

The district bought the property in 2020 for twice as much money as the land sold for in late 2018. A two-month investigation into the deal found that the brokers worked to increase the sale price of the property despite some school board officials believing the agents represented the board.

The men said they had done nothing wrong, that they were transaction brokers, meaning they did not owe a fiduciary duty to either the buyer or the seller.

The criminal charges stem from the same period of time, as Drotos and Ryals stopped working for Bosshardt Realty Services LLC to start a Gainesville branch of Colliers International Group Inc. They had originally agreed to represent the school district while working for Bosshardt, but the land deal was completed after they moved to Colliers.

Prosecutors on Tuesday formally accused the men of stealing confidential information from Bosshardt worth more than $50,000 and used it to conduct their real estate business. The state attorney’s office filed its indictment in Alachua County Circuit Court late Tuesday. The criminal charges did not mention any specific land deals, including the work for the school board.

“There’s nothing in the charging document that explains the basis of the charges,” Kozlowksi said in an interview. “There are no trade secrets, no trade secrets were stolen, and Drotos and Ryals did nothing illegal.”

Kozlowski said Aaron Bosshardt responded to a civil lawsuit filed earlier by Drotos and Ryals by providing what he said was false information to Gainesville police. Bosshart has disputed that.

In the land deal, interviews, emails and documents showed that the brokers worked to increase the sale price. One message between the two described efforts to “sway the # (number) up,” increasing the cost to county taxpayers by millions of dollars – and raising the total commission payments they collected on the deal.

Those efforts occurred one day before the agents formally signed an agreement to work on behalf of the school board.

The agents began work on the land deal in 2018, when they helped a longtime friend and developer, Peter Trematerra, purchase a $1.85 million property in west Gainesville. Before the property was purchased, national homebuilder D.R. Horton looked to develop the land into a residential neighborhood for $4 million, which would require approvals from county planning boards and more, proving more costly and time-consuming.

The school district purchased the land for $3.68 million.

After the police raid, prosecutors also filed sworn complaints in the case against three other Colliers International employees, Andrew Christian Oldenburg, 41, Lauren Edwards, 24, and Rory Causseaux, 60. They were not formally charged Tuesday.

Drotos and Ryals are separately engaged in civil lawsuits with Aaron Bosshardt and Bosshardt Realty Services. The agents allege Bosshardt supplied Gainesville police with false and defamatory information in a case that is set to test the boundaries of First Amendment protected speech in Alachua County Circuit Court.

Bosshardt has said he gave police factual information that indicated a crime had been committed.

The Colliers agents also allege Bosshardt Realty Services shorted them on commission payments after their departure from the firm.

—
This story was produced by Fresh Take Florida, a news service of the University of Florida College of Journalism and Communications. The reporter can be reached at walter.harwood@ufl.edu and annawilder@freshtakeflorida.com