Gainesville is inching closer to its goal of achieving zero waste by 2040.

The Gainesville City Commission adopted an ordinance Jan. 20 that allows the city to enter into an exclusive franchise agreement that aims to collect garbage and bulk waste from the community. This would allow the city to grant exclusive certificates of registration for residential and commercially collected residential property.

The policy did not include the previously proposed food waste ordinance discussed on Aug. 3, 2021, which would require both residential and commercial locations to separate their solid and food waste to prevent it from going to the landfill.

“Grocery stores would be mandated to give the food to those who are hungry in the community before throwing it away,” Gainesville City Commissioner Adrian Hayes-Santos said.

Gainesville resident Kenneth Hornsby, 23, said he supports the city’s initiative but doubts that people will follow it.

“I think people are lazy, and that is why they don’t reuse or recycle,” Hornsby said. “So, there would need to be more incentive to get them to do it.”

Ann C. Wilkie, a professor of bioenergy and sustainable technology at the University of Florida, said she believes that it is possible for the Gainesville community to be more sustainable. Wilkie created a sustainable garden outside her lab with the help of students. The garden is fertilized by compost food scraps and irrigated by stored rainwater.

“Alachua County has been the leader for so many years.” Wilkie said, referring to Alachua’s sustainability efforts. “I believe people here have the determination and mindset to do it.”

Wilkie said it is important to educate the community about the effects that trash has on the environment and the landfill, which produces methane, a greenhouse gas more potent than carbon dioxide.

The most challenging part of the new project, Hayes-Santos said, will be educating people about what can and cannot be composted. With time and the right information, he said he believes the initiative will flourish.

In April 2021, the city began a food waste pilot program for eight months. 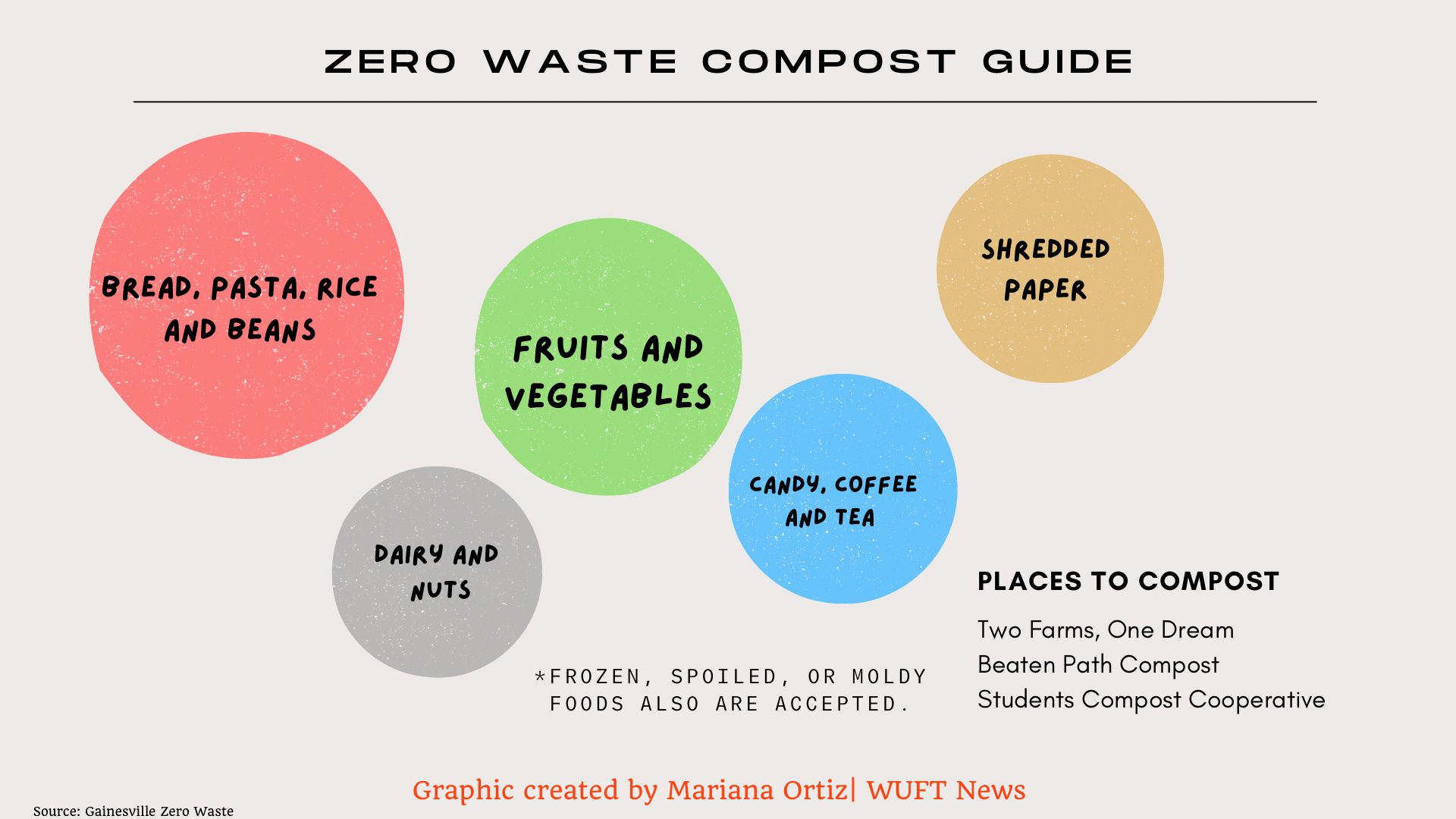 Tom Strickland, recycling coordinator in the city’s solid waste division, said he believes that educating people on how to recycle is essential and would not only reduce the cost of recycling but also the waste that goes into the landfill.

Data from the pilot program showed that 21.43 tons of food waste was collected from the 199 homes.

These families were given a list of what could be placed for recollection as well as a five-gallon yellow bucket to store the food waste. Beaten Path Compost, a local compost, collects the buckets each week. The food waste is added to the community’s compost pile, which will later transform into a high-quality soil amendment used in gardens and farms.

During the meeting, the commissioners also designated Jan. 23 to Jan. 29 as Zero Waste Week.

Nina Bhattacharyya, co-chair of Zero Waste Gainesville, a community-led initiative supporting policies and lifestyle choices that advocate for sustainable living. Bhattacharyya invites the community to participate and ask questions during the virtual section.

Gainesville Zero Waste has partnered with other local sustainability organizations like The Repurpose Project and Life Unplastic to educate the community on its journey to Zero Waste by taking small steps.

Bhattacharyya, Hayes-Santos and Wilkie agree that teaching others is the first step to a greater outcome.

“I believe that it all starts with education,” Wilkie said.

Mariana is a reporter for WUFT News who can be reached by calling 352-392-6397 or emailing news@wuft.org.
Previous Low temperatures reach Florida this weekend, bringing a hard freeze to our area
Next The How Bazar emerges as a hub that uplifts small businesses