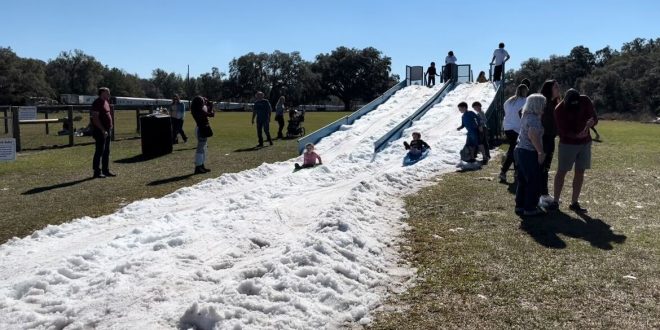 Sherry Morales remembers how her daughter Kimberly used to waltz down grocery store isles. Terrazzo floors reshaped into wood in her mind. Shelves molded into people and ballet shoes appeared on her feet.

She leaped past the rice, chassed alongside the spaghetti sauce and topped off the performance with an imposing pirouette. Fini.

“She just danced and tapped and kicked her feet everywhere,” Sherry Morales said. “She shined.”

Sunday marked three years since Kimberly’s death in an ATV accident. The Morales family set up a charity, the Kimberly Morales Memorial Foundation, in her honor just months later. On Jan. 15, 2,000 people came together in the family’s hometown of Williston for the non-profit’s 3rd Annual Snow Party — a fundraising event for community scholarships.

Sherry Morales is a daycare teacher at Kids N Company and serves as the foundation’s president. Her three children hold the remaining officer positions: Jaime Jr., 29, is vice president; Cinthya, 26, is secretary; and Jonathan, 18, is treasurer. Her husband Jaime Morales and sister Lori Lesbott serve on the foundation’s board.

Brandon Cardwell, 31, is a longtime family friend of the Moraleses. He said he knew Kimberly since she was born. Her and Cardwell’s daughter Emilia were good friends, and Morales taught his two sons at her daycare.

Cardwell brought his wife and kids to this year’s snow party after they attended the first in 2020. The party, located at Kirby Family Farms, offered attractions such as sled slides and train rides as well as food and retail vendors.

“It was terrible. It was sad. It’s a parent’s worst nightmare,” Cardwell said, remembering Kimberly’s accident. “You send your kids off to a friend’s house thinking they’re safe.”

More than 2,200 nationwide fatalities related to off-highway vehicles (OHV) occurred between 2015 and 2017, which was the last year the Consumer Products Safety Commission tracked such data. Of those deaths, nearly 1,700 were related. Only 75 OHV deaths occurred in Florida during that window.

Morales said the family’s foundation models its mission after Kimberly — like when she gave lunch money to other students and helped fight against bullying in the classroom or how she once dug up old toys from her brother’s room to give a classmate.

Because Kimberly spent most of her time at school, Morriston Baptist Church and in dance classes, the foundation offers scholarships for local children to put toward college, mission trips and sports. It has given out 21 scholarships since 2019.

The foundation also hosts an annual beauty pageant that collects canned foods for Love Levy, Morriston Baptist Church’s food pantry, but the snow party is its most lucrative event. Morales said the non-profit raised about $7,000 in 2020 and $10,000 in 2021 at the first two snow parties. This year’s event raised $13,000.

Dancers, elementary-aged children to adults, performed Irish routines throughout the day in Kimberly’s honor. She enjoyed many styles of dance, including tap, ballet and modern, Morales said. But of all 11 classes she tried at Gainesville Dance Academy, Kimberly took a special liking to Irish dancing.

“She loved the fact that she could express herself with just her feet,” Morales said.

Calleta Jones, 43, and her son Jaylen Jones, 15, attended their first snow party this year. Jones went to high school with Morales but did not know Kimberly. After Jones’ sister told her about the event, she decided to go in support of her former schoolmate.

The Morales family’s decision to center the fundraiser around snow was an economic one. The owner of Gainesville Ice, a fake-snow-making company, is a friend and offered them discounted snow and sleds. Vendors were the only thing left.

Retail and food vendors paid the foundation between $50 and $100 to attend the snow party. Some also donated portions of their sales to the non-profit afterward.

Carey Strickland, who owns and runs Firefly Lane Boutique — a small company that opened in August and sells children’s clothes and accessories — found out about the snow party through Facebook and decided to sign up as a vendor. She holds high praise for the Morales family and plans to sign up again next year.

“They do wonderful things for the community and the children in it,” Strickland said.

New York resident Jessica Ward made a pit stop at the snow party for her 40th birthday while vacationing in Florida. She found the party through Google after searching up events in Ocala. Ward brought her daughter Nicole and her parents Philip and Linda Wade.

The Ward family enjoyed slushies, ate ice cream and ended the day with a train ride. Beyond the copious festivities, Ward recognized the purpose of the day.

“To us, it’s just something fun, like a family event,” Ward said. “And for (the Morales family), they can raise money to give back.”

Ward added: “It is not only a great way to remember Kimberly and her kindness, but that kindness continues in her name with the scholarships and programs that the snow party raises money for.”

Helen Hafers-Walker and her daughter Sloane, 8, have attended every snow party the Morales family has hosted. Over time, the pair has watched the event grow.

There were more vendors this year than years past, Hafers-Walker said. She also noticed more people in attendance. Morales said the snow party started with about 30 vendors in 2020 but had 50 this year. Likewise, the foundation reported 1,500 attendees in 2021 compared to 2,000 on Jan. 15.

Reflecting on the three years since Kimberly’s passing and her foundation’s impact on Williston, Morales said she believed her daughter would have been a great asset in planning her snow party.

Faith is a reporter for WUFT News who can be reached by calling 352-392-6397 or emailing news@wuft.org.
Previous US judge blocks ‘unconstitutional’ UF rules limiting professors from testifying against state
Next The Point, Jan. 24, 2022: A federal judge blocked UF’s rules that limited professors’ testimony