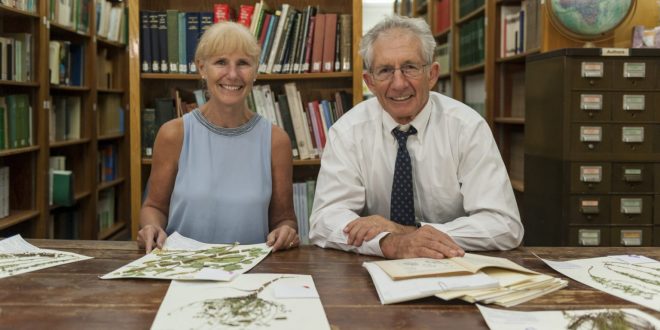 Pam and Doug Soltis are helping spearhead efforts to sequence nearly half-a-million species of land plants for the Earth BioGenome Project. (Photo courtesy of Kristen Grace and the Florida Museum of Natural History)

Pamela Soltis, a plant biologist at the Florida Museum of Natural History, is part of the Earth BioGenome Project, which began in 2018, and has recently co-organized a special journal issue describing the goals, accomplishments and next steps of this effort.

“This project provides a fundamental piece of knowledge about our planet, one that will help us understand all other aspects of life on Earth and provide resources for us in ways that we can’t even anticipate,” Soltis said in a Florida Museum of Natural History press release.

In this special journal are various perspectives that explore several important aspects of the project: major scientific goals; examination of ethical, legal, and social issues; adaptation to climate change; prevention of pandemics and more.

The project currently includes 5,000 scientists and technical staff within 44 member institutions. This team extends through 22 countries on every continent except Antarctica, and there are 49 affiliated projects covering most of the major taxonomic groups of eukaryotes.

In Soltis’ special journal, she assesses the difficulties of sequencing the genomes of Earth’s nearly half-a-million plant species. According to the press release, plants are among the most diverse groups of eukaryotes, second to plants.

Also in recent progress, a group of African institutions in 22 countries came online as the Africa BioGenome Project.

“Every month, there’s a new group that signs on to the Earth BioGenome Project as a collaborator, and this is certainly a type of project that could not be accomplished by any even small number of institutions,” Soltis said.

Improvement in crop production and biotechnology, the development of new medicines, and insights into effective conservation strategies are just a few of the benefits of sequencing plant genomes.

“Now, we can use information and tools that were developed through the Human Genome Project, to study all other sorts of organisms,” Soltis said. “These are all advantages that weren’t even dreamt of when the sequencing of the human genome was proposed.”

Since its 2018 inception, the project has developed and evaluated strategies, national projects and communities. An ethics, legal and social issues committee and a justice, equity diversity and inclusion committees for the project has also been established by the International Scientific Committee.

Soltis said because the world is facing a number of environment-related challenges, it is more important than ever to understand the species that occupy our planet.

“We think that this information from the genomes can help us develop new medicines, new opportunities for crop improvement, and food production, and also will provide clues to how we can best conserve biodiversity.”

Kristin is a reporter for WUFT News who can be reached by calling 352-392-6397 or emailing news@wuft.org.
Previous Florida appeals court dismisses wife’s ‘confession letter,’ upholds father’s conviction for starving baby to death
Next A living history: Reenactor fills the gap of Black Seminole legacy in Florida