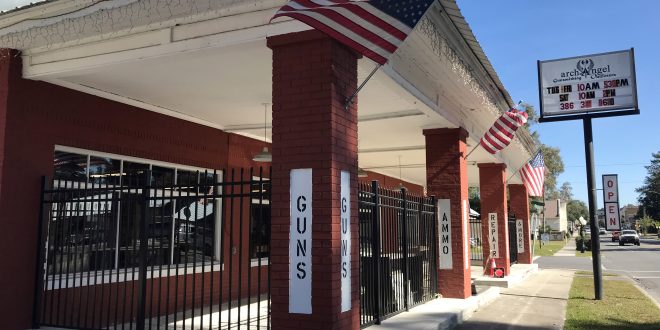 ArchAngel Gunsmithing and Outfitters is located on Newberry Road, in the center of the Newberry historic district. (Amy Galo/WUFT News)

At 3:15 a.m. the morning after Thanksgiving Day, ArchAngel Gunsmithing and Outfitters was broken into. Lee and Casey Mason, owners of the Newberry gun shop, said the front door was forcefully ripped open by two men using a stolen truck.

The two men who broke in took a total of six items from the shop estimating a total value of $5,000 to $6,000, according to Lee. The Alachua County Sheriff’s Office investigation is still ongoing.

“While we are investigating many leads, there is nothing further that we are able to release right now because of that status,” according to the public information officer Captain Kaley Behl.

The couple’s ADT security system notified them that something happened to the front door at the time of the break-in. They quickly made their way to the shop, beating law enforcement to the scene.

Prior to the break-in, Lee and Casey had been working on renovations to their store. Due to the building’s history, the couple had limitations as to what could be altered.

“Originally, we had to keep the original door because it was historical,” Lee said. “But now, we’re examining our options with the county, and we’ve replaced it now with a steel door. We still want to keep the aesthetics, but we’re placing more focus on security measures.”

Being in the historic district, Casey said any additions to the building’s exterior must be approved. However, with Mayor Jordan Marlowe’s help, the Masons were able to install a temporary door on Saturday.

“We pretty much can bypass the steps for now, and then we’ll do the meetings and all that kind of stuff,” Casey said. “[Marlowe] gave us some leniency.”

The new door is made of steel and does not have a handle on its exterior.

Due to the break-in, the couple was unable to open their shop for Black Friday. Casey said this is usually one of the biggest days in sales for their business.

“This is a family-owned and operated business, so it kind of hit us pretty hard,” Casey said.

But, the community was quick to come together to help. On Saturday morning, ArchAngel reopened, and the store was busier than ever, even extending its hours.

Lee said Josh Taylor, a Newberry resident and friend, is to thank for this. Taylor took to Facebook Friday evening to encourage people to come and support ArchAngel on Small Business Saturday.

“I believe that Newberry has the biggest heart of any town,” said Taylor in his post. “I have confirmed they [ArchAngel Gunsmithing and Outfitters] will be open tomorrow… ArchAngel not only sells guns and ammo, but also candles, bags and lots of neat products. It would be awesome if we all show them some love during this difficult time!”

Casey expressed it was heartwarming to see the community come together to support the store, and she hopes what happened helps put the experiences of small businesses into perspective.

“I hope everybody takes this situation, and all situations like this, a little bit more seriously,” she said. “I think all small businesses, because we are small, need to be supported more so than big box stores because we do make the country go ‘round.”

Amy is a reporter for WUFT News who can be reached by calling 352-392-6397 or emailing news@wuft.org.
Previous One Buchholz student organization is running to raise awareness about mental health, suicide prevention
Next The Point, Dec. 10, 2021: What good news can you share from this year?