For some people, there’s often no better way to end a long day than drinking a beer with a friend — especially a furry one.

Lebowski’s Pup Pub is a new bar aiming to let the Gainesville community do just that.

You just need to get through a BOWncer first.

“It’s not every day that I can bring my dogs when I come to drink with my friends, so this is a nice way to meet up,” said Cory Berstler. Berstler is from Gainesville and owns two dogs.

After their long workdays, the co-owners were left feeling bad for their pets at home and started looking for ways to still do their work while spending time with them.

“Now I can sit here and bartend while I watch my dog play just outside,” Schmelke said.

The group’s hopes of bringing a new type of bar to the city stalled because of the pandemic.

“There was just a lot of waiting and anticipation through it all,” Schmelke said. “But now this is the perfect place to spend time after the pandemic because people can socialize in an outdoor environment where they can social distance and be with their dogs.”

Staff members refer to themselves as BOWncers, with each one trained to handle any issues that might arise with the animals on property.

Throughout the state, there are bars with similar concepts that have opened in recent years, with one of the closest being BrewHound Dog Park & Bar in Neptune Beach. According to Schmelke, Lebowski’s is only the second that has the permits for a full liquor bar and isn’t limited to just beer.

“Finding insurance and getting through all of the necessary permits was one of the hardest parts of opening Lebowski’s,” he said.

The bar also had to go through legal processes involving the presence of animals on its property. The solution: A membership package which according to their website, has these requirements for eligibility: “Your dog will need to be vaccinated, fixed over 10 months and not show signs of aggression.”

Lebowski’s opening day event had local food trucks, outdoor games, a ribbon cutting ceremony and loud music near the bar area. Visitors walked around and mingled with their pets, or they could leave them in the play areas that had double locks for safety of the animals.

“I don’t think the location could get any better because it is easy for dog owners in the city to come here and it is right by campus for students who are looking for something new to do,” said Kate McNamara, a public relations sophomore at UF from Wellington.

Ben Raulerson, a marketing representative for one of the event sponsors, Long Drink, has lived in Gainesville for 18 years.

“Of all my time in Gainesville, I have never seen a place like this which is crazy because we are definitely a dog town,” he said.

The Humane Society of North Central Florida is partnering with the pub to increase pet adoptions.

“Seeing people out here enjoying time with their pets is something that I know will encourage others to adopt,” said Heather Thomas, the organization’s executive director, who attended the event along with some of the nonprofit’s volunteers.

Animals up for adoption are showcased in other means as well. The pub carries beer cans from Motorworks Brewing called the “Adoptable Lager.” Each can features an image of a dog up for adoption along with information about the animal.

The co-owners of Lebowski’s hope to continue in their efforts to help animals in many ways. 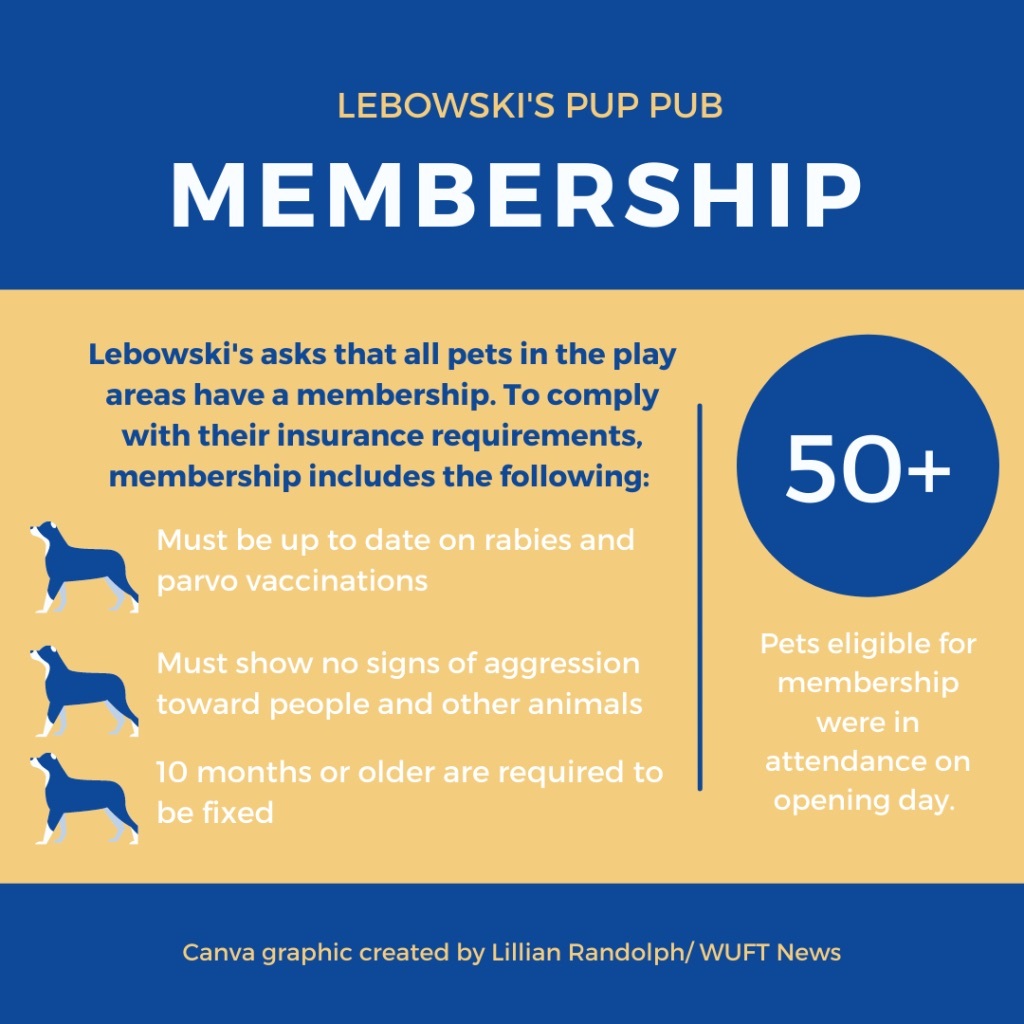 Lillian is a reporter for WUFT News who can be reached by calling 352-392-6397 or emailing news@wuft.org.
Previous Oak Hammock senior residents are exploring what’s possible with virtual reality
Next Students gather in Porters Quarters to paint a senior resident’s home