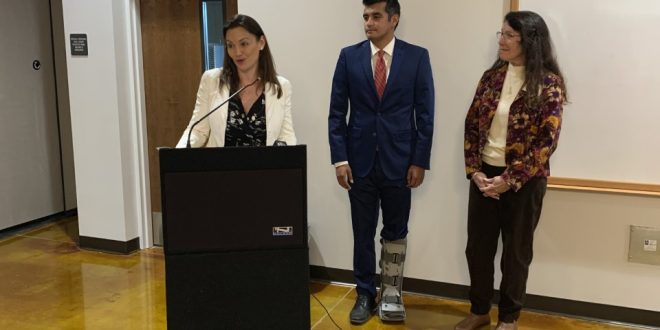 On Thursday, Agriculture Commissioner Nikki Fried discussed the phaseout of polystyrene food packaging at a press conference in Alachua County.

She was joined by Gainesville City Commissioner David Arreola and director of Keep Alachua County Beautiful Gina Hawkins at the new UF/IFAS extension building in Newberry, which opened Tuesday.

Polystyrene, a plastic material commonly used in food packaging – such as Styrofoam – has come under fire for possible links to health issues. The material may be linked to human health concerns including cancer, birth defects, and liver and kidney damage, according to a department press release.

Fried has made this a top-priority issue for her department in recent months.

In September, Fried announced the statewide phaseout of the material. In November, she gave an update on the rulemaking process on the first day of the Florida Energy and Climate Summit. And on Thursday, she continued the conversation in north central Florida.

She said six states across the country have begun fully phasing out polystyrene, along with local governments in 10 other states including Texas, Virginia and Maryland.

Arreola echoed Fried sentiments and said he sees the benefit of phasing out the plastic.

“By banning polystyrene and phasing it out of usage in the commercial market, we’re essentially going to be able to remove that from contaminating any of the food chain…,” he said.

Fried said the Florida Department of Agriculture is committed to working with businesses to transition away from polystyrene.

Matthew is a Digital Producer and Reporter for WUFT. His work focuses on sports and education, but he ventures out into other areas as well. In the spring of 2021 and summer of 2022, Matthew worked for ESPN Gainesville where he provided hourly sports updates and wrote for the website. In 2022, Matthew began contributing to The Point Podcast and providing local hourly news updates on All Things Considered. He may be reached by emailing bellmatthew@ufl.edu.
@pod_mattb
Previous Greater Gainesville Chamber Hosts annual Business of the Year Awards
Next Leaving a four-decade legacy, Thornebrook Gallery is set to close