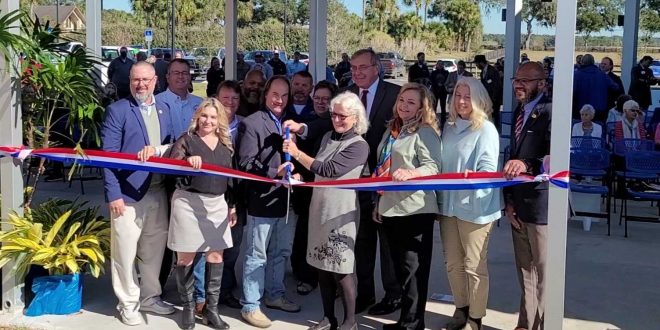 The cool air was filled with warm cheers from farmers, contractors, businessmen and community members alike after the ribbon fell to the floor: a scissor snip four years in the making.

“The vibe today was really positive,” said Curtis Loftus, a farmer and future owner of the Loftus Family Farm, “and the event was beyond awesome.”

The University of Florida/Institute of Food and Agricultural Sciences (UF/IFAS) is a scientific organization focused on providing information about agriculture and natural resource use. This extension office, like the others across Florida’s 67 counties, will serve as a hub for individuals in Alachua County to receive training and specializations in the agriculture field, as well as practical knowledge for gardening, pesticide use, and irrigation.

Roughly the size of four football fields, the city of Newberry granted to the county the land where the new extension office sits. It will replace the old extension office located in Jonesville, which was over 45 years old. Cynthia Sanders, the UF/IFAS Alachua County Extension Director, said she and her team had well outgrown it.

“At our old facility, we had a conference room that could seat about 50 people, but we have programs now where we’re teaching over 100 citizens,” she said. “The facility that we have now can seat over 300.”

The new facility will host the hundreds of programs that the old extension office provided, as well as activities for organizations like 4-H and the Future Farmers of America.

“With this facility, we now have more opportunities to really touch the community in a greater capacity,” Andra Johnson, the UF/IFAS Dean of Extension, said. “And that’s what this facility is all about, that ability to further support the community and to advance IFAS’s mission to provide science-based information to it.”

On top of the $6 million in taxpayer dollars and outside loans used by Alachua County, a $1 million contribution from Newberry and a $400,000 grant from Florida’s Department of Agriculture and Consumer Services was used to help finance it.

“It took a long time [for Alachua County] to accumulate what they needed to be able to build this,” said Thomas Obreza, the Senior Associate Dean of Extension at UF/IFAS. “And there were plenty of champions in the background…who were responsible for seeing this endeavor through along the way. That behavior just tells you how much they think it’ll benefit the citizens of the county.”

Plans for the county to move its extension office were envisioned nearly 30 years ago, but a proper location for the replacement wasn’t offered until Newberry gave the plot on 22712 W. Newberry Road to the county. Project development started in 2017, and the groundbreaking ceremony for the new extension office was held on Oct. 11, 2020.

Construction continued through late September when agents from the extension office in Jonesville moved their operations to the one in Newberry. The facility is now open for public use from 8 a.m. to 4:30 p.m. on weekdays.

Marihelen Wheeler, the chair of Alachua County’s Board of County Commission, recounted the county’s long journey, praising those who helped see this facility to fruition.

“I want to thank Alachua County’s voters and taxpayers for your investment in this project and your belief in dreams,” she said during the ribbon-cutting ceremony. “There are a lot of places in this county where we are going to be asking for dreamers to step up the way they did here.”

Newberry Mayor Jordan Marlowe said this relocation is like the jewel to his city’s crown.

“The citizens of Newberry have probably been more excited about this project than any other development in recent history,” he said. “To a T, we are so ecstatic to have this happen today.”

Marlowe also said that having this extension office in Newberry’s backyard will serve as a jumping-off point for the city to build its Agri-Tech Innovation Park, a state-of-the-art center designed to research and develop technologies for improving crop growth and harvest efficiency. The new park is set to be built adjacent to the new UF/IFAS Extension Office and the Alachua County Agriculture and Equestrian Center.

“Newberry has set its sights on becoming the agriculture technology center of north central Florida,” Marlowe said, “and our partnership with Alachua County and IFAS here is going to anchor that project and move it into reality.”

Though the innovation park is currently conceptual, the new extension office already has programs scheduled for the community, including a class on Monday for cooking with herbs to reduce sodium intake and a session for getting certified to use fertilizers commercially on Dec. 17.

Loftus said this education is what the community in Newberry and Alachua County needs, especially when it comes to engaging with the next generation of farmers in the county.

“In middle schools and high schools, there has been a big disconnect between adolescents and the agriculture industry,” he said. “Everyone’s been geared towards thinking that you’ve got to go to college, you’ve got to get a good degree, you’ve got to do this, that or something else to be successful. But Alachua County was founded on agriculture, and I think this facility is gonna be a big part in bringing young interest back.”

Bryce is a reporter for WUFT News who can be reached by calling 352-392-6397 or emailing news@wuft.org.
Previous U.S. Supreme Court hears arguments in Mississippi abortion law case
Next ‘Farmers don’t get rich’: This Marion County couple decided to become farmers for their retirement