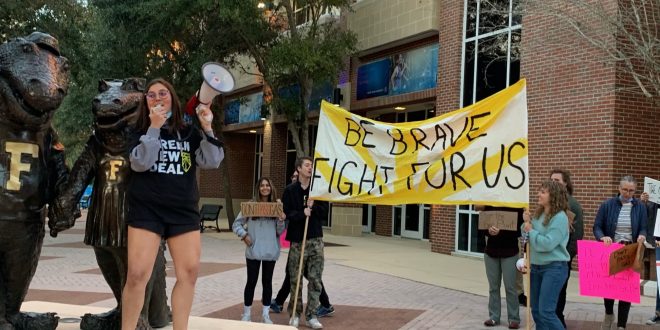 For Waa’wam Qicxne’wéet, protesting is tradition. As a Nez Perce tribal member, they consider it a responsibility to care for and protect the land.

They were one of roughly 40 protestors who gathered in front of the University of Florida’s Emerson Alumni Hall on Monday afternoon to protest the university’s Central Energy Power Plant Project.

The “Don’t Pass Gas” protest was organized by Sunrise Movement and North Central Florida Indivisible to demand a temporary halt to the current project before the UF Board of Trustees meets on Thursday to finalize its decision.

The project would create a new power plant on Gale Lemerand Drive to replace the expiring Duke Energy cogeneration facility, as well as a new thermal piping distribution loop and electrical substation. The power plant would run for 50 years and provide electricity, steam and chilled water to 131 campus buildings using natural gases.

“Even if a little bit leaks out and we can’t help if some of it leaks out, then the climate consequences are very large and significant,” Hastings said.

He said the best course of action for UF would be to take a pause in their decision-making process and gather energy analysts to focus on sustainable alternatives. He suggested solar energy as a cost-effective option.

“The technology exists, and the price has plummeted in the last decade or so,” Hastings said. “This solar [energy] is at the same price or cheaper than fossil fuels.”

UF declined to comment on details regarding the agenda for the Board of Trustees meeting on Thursday and any new details about the central energy plant.

“Because of the active ITN in place, we really can’t share comments any further on it right now” said UF spokesperson Cynthia Roldan.

According to the UF project website, the project is considered the best solution after considering factors such as cost, environmental impact and campus energy requirements. It is expected to save UF $2.8 million per year in chilled water utility savings and $13.2 million in combined heat and power utility savings.

“The cost-benefit calculations for the plant are different, especially now with the federal funds that are coming through for revitalization, the infrastructure funds and the money that is coming in to support clean energy,” said Parmar, director of North Central Florida Indivisible.

Parmar encourages the university to listen to community members, such as the 35,000 people who have signed their petition in support of a renewable alternative to the central energy plant.

“We don’t know, and we can’t seem to find out how this conversation started, who started it, who the actual decision-makers are, except that at the end of the day the Board of Trustees will vote on it,” Parmar said.

Grace Lear, a spokesperson for the Sunrise Movement, said UF is suppressing community members’ voices at the upcoming Board of Trustees meeting by not allowing public comments on the topic.

“I came to this university because it is so wonderful, amazing, and they encourage students to better it and make it what it is,” Lear said. “Well, they’re not doing that they’re, quite frankly, doing the opposite because we have to be able say what we want the school to be.”

It also mentions that if the plant follows through with solely natural gas it would be the largest single contributor to UF’s greenhouse gas footprint.

Lear believes that the energy plant does not align with UF’s goals to be carbon neutral by 2025.  She said UF should follow the lead of other public institutions of higher education, such as the University of California, which divested from fossil fuels in 2020.

“If we want to stay top five, and if we actually mean top five, then we need to do so, too,” Lear said.

“We hope they can revisit this over the years and maybe even hire someone to keep an eye on it and track the sustainability of it,” Griffin said. “At least if they are going to build this, show that you are going to make those changes once they’re possible.”

Arlette is a reporter for WUFT News who can be reached by calling 352-392-6397 or emailing news@wuft.org.
Previous Animals sat next to people at a vegan feast in Newberry
Next Arc of Alachua County marks decades of celebrating people with special needs

Changes in federal guidelines mean that students at 17 Alachua County schools will not be guaranteed free or reduced-priced meals unless they apply this school year.