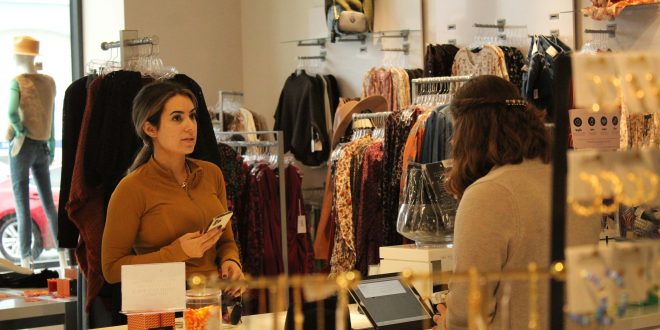 A customer pays for her purchase at Narcissus on Oct. 28, 2021. (Madison Chestang/WUFT News)

“I’ve had customers cancel orders because they get frustrated waiting two or three weeks for a book,” Heather Halak, owner of independent bookstore Third House Books, said. “I don’t know if people understand that this is going to get worse.”

Third House Books is one of many businesses in Gainesville and across the country feeling the impacts of supply chain shortages in advance of the holiday shopping season.

Halak says she’s afraid that customers will be upset about the shipping delays and choose to shop on Amazon instead. “It feels like all the odds are stacked against indie bookstores this year,” Halak said.

Being immunocompromised, Halak has been unable to physically reopen Third House Books due to COVID-19 case numbers. Since she has relied on online ordering to keep the business open, Halak has been battling shipping delays since the start of the pandemic. “We had some of these issues even last year, especially with the attack on the USPS and lots of mail delays, but right now it’s worse than ever,” Halak said.

Halak said that Third House Books has been experiencing shortages in all of its book stock. Her distributor advised her to encourage holiday shopping as early as August.

The impact of the supply chain shortages is being felt around the world. Disruptions in factories due to the COVID-19 pandemic have caused shortages in products like paper, lumber and microchips, which has placed a strain on businesses preparing for holiday shoppers.

Gamesville Tabletop, a local store that sells games, has also been grappling with supply issues. Although sales are at an all-time high, owner Lloyd Brown says that a number of his products, including the popular Dungeons & Dragons, have been unavailable for months.

Brown said that game manufacturers are also raising the selling prices of games in order to offset losses from the supply issues, but aren’t raising retail prices. Storeowners like Brown have to choose whether to sell items above the suggested retail price or lose money for each item sold.

“It’s a really crappy move to us, and it doesn’t actually make the product cheaper for the customer,” Brown said.

Brown said that the store is dealing with the shortages by buying their products from multiple vendors. He, like the bookstore, encourages early orders.

“Communicating with customers and managing customer expectations helps with damage control, too,” he said.

Brown also bought 3D printers to make his own merchandise for sale in the stores. So far, the store has produced a box of miniature roleplay figures for tabletop games.

Brown said the printers are a way to avoid product shortages. “We never have to complain about it being out of stock,” Brown said. “I have no one to blame but myself if that happens.”

Although boutique Narcissus Gainesville has experienced shortages in some of their products, manager and buyer Samantha Smith places weekly reorders to try to keep the store stocked for the holidays.

“I try to do all I can to combat it, but there’s some stuff you just can’t combat,” Smith said.

Smith also said the store has been experiencing staffing shortages in the past year. She believes the shortages may relate to the move to in-person instruction. “With students going back to in person, it’s been really difficult for students to balance having a job and being back in person.”

In anticipation of a busy holiday season, Smith is advising customers to begin their holiday shopping early.

Madison is a reporter for WUFT News who can be reached by calling 352-392-6397 or emailing news@wuft.org.
Previous New hyper-sub could reach markets soon
Next Local firm assists with Alachua and Tri-County US Marine Corps Toys for Tots campaign