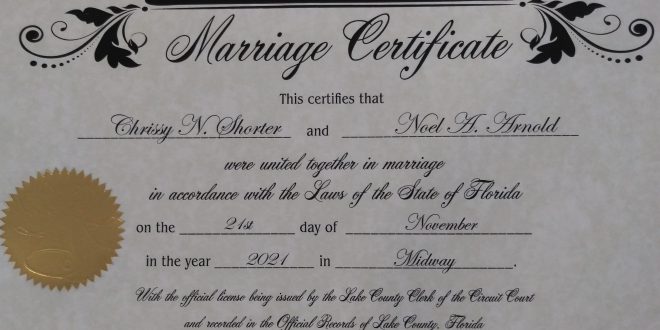 The morning after Chrissy Shorter held her wedding ceremony over speaker phone, she rushed to the Lake County Courthouse about four hours away from her home in Quincy. She arrived before it even opened; she could not wait to put all the months of difficulty behind her and finally be married. (Photo courtesy of Chrissy Shorter)

A former inmate and her convicted fiance in a federal prison exchanged vows Sunday night in an unauthorized wedding ceremony over a phone call, moving their plans ahead by one day over concerns that the Justice Department might try to interfere.

On Sunday, Chrissy Shorter and Noel Arnold exchanged vows over a phone call. They had previously planned their unauthorized phone wedding for Monday but decided to wed a day earlier out of fear that officials at the Coleman Federal Correctional Institution would thwart their ceremony by denying Arnold phone privileges.

Chrissy Shorter, 43, and Noel Arnold, 45, rescheduled their ceremony after publication of a news article about their plans. Shorter said she was hoping to avoid interference by the U.S. Bureau of Prisons in case it attempted to stop the marriage or retaliate. Arnold is serving a sentence for armed robbery in Georgia until September 2027 at Coleman, a low-security prison in Sumterville about 50 miles west of Orlando.

Shorter and Arnold spent more than seven months – including filing a federal lawsuit that is still pending – trying to compel Coleman’s warden, Kathy Lang, and unit manager, R. Jimenez, to permit an in-person ceremony. Their marriage request was denied, and questions about why went largely unanswered.

Shorter, who served time in federal prison for owning and operating a fraudulent tax services firm, said she believed the warden denied the couple’s request because she is transgender and a former inmate.

Separate from the marriage requests, Shorter is also being denied visitation privileges. So, rather than wait for approval that risked never arriving, the couple sought a loophole in the form of an unapproved ceremony.

On Sunday, Arnold called Shorter at 6 p.m. They have spoken over the phone either every morning or every night – some days both – since Shorter was released from the Federal Correctional Institution in Miami, where they met Feb. 14, 2019.

Shorter answered excitedly when she heard her fiance: “Hey, honey!” The eager uptick in her voice gave away her smile. “You ready?” she asked.

A five-minute ceremony followed. Shorter had practiced and timed the ceremony to fall under 10 minutes, the maximum amount of time Coleman inmates are allowed per prepaid call.

Teresa Williams, Shorter’s godsister, officiated the wedding. Florida is one of three states where a commissioned public notary like Williams can perform marriage ceremonies. Williams said she recognized Arnold’s voice. She and two other witnesses physically accompanied Shorter in Midway, 14 miles east of Tallahassee, while listening to Arnold over speakerphone.

Parts of the ceremony were symbolic: the exchanging of rings, the kiss. Shorter and Arnold were unable to do either since Arnold was in prison about 225 miles away.

“And now by the power vested in me by the State of Florida, it is my honor and delight to declare you married,” Williams said. “Go forth and live each day to the fullest, you may seal this declaration with a kiss.”

Shorter said she spoke early Monday to Arnold, who said he faced no disciplinary action so far over the unauthorized wedding. Shorter received a marriage certificate from the Lake County Clerk of Circuit Court and said she will send Arnold a copy, along with his ring.

Shorter said her next step will be to confirm the Bureau of Prisons considers her marriage legal. She plans to file a motion in U.S. District Court asking a judge to declare the marriage is legitimate and grant her visitation rights, since she is now Arnold’s immediate family.

“I’m a fighter,” Shorter said. “I’m his wife. And there’s nothing anybody can do about it. It’s been a journey, and people should not have to go through what we’ve gone through. But love conquers all.

This story was produced by Fresh Take Florida, a news service of the University of Florida College of Journalism and Communications. The reporter can be reached at ngalicza@freshtakeflorida.com.

Natalia is a reporter for WUFT News who can be reached by calling 352-392-6397 or emailing news@wuft.org.
Previous Gainesville gathers to honor lives lost for Transgender Day of Remembrance
Next Native Americans are unapologetically threading their way through the music industry