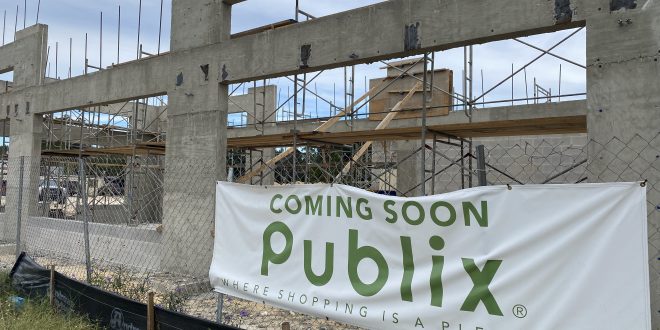 A sign reads "Coming soon" on the construction site where the new Westgate Publix is being built along West University Avenue. The project is expected to be complete by mid-2022. (Camila Pereira/WUFT News)

A new and improved Publix supermarket is in the works along West University Avenue after the original store was demolished a few months ago.

The Publix on 3315 W. University Ave. in the Westgate Shopping Center is under construction as the store has reached the end of its life cycle, Chris Norberg, community relations manager for Publix Super Markets, Inc., wrote in an email.

Norberg wrote that the store had been a staple in the Gainesville community for over 50 years, but it was determined that a full teardown-rebuild of the location was in order.

The supermarket closed on May 1 for demolition, with plans to rebuild and redesign the building.

The new Publix is estimated to be about 48,000 square feet, 13,000 square feet larger than the original building, Norberg wrote. It will be built in the same location, and additional details for the expanded store will be made available closer to the grand opening, which is expected in mid-2022.

All Publix associates of the Westgate location were reassigned to neighboring stores in the area and will have the option to return upon its reopening, according to Norberg.

Aiden Kirkland, 21, who originally worked at the Westgate location for a little over a year, was transferred to the Publix at University Village Market on 203 NW 13th St. as part of the customer service staff.

Kirkland said the company had alerted the employees months in advance of the shut down and were given a list of options of nearby Publix locations to state their top preferences to transfer to.

“I’m pretty sure all associates got their first option that they chose,” he said. “Whichever one was closer or more convenient for them.”

Kirkland said he might not return to the Westgate location when given the option to do so.

“I really like my current one as is,” he said. “It’s more convenient anyways.”

But Kirkland said he is looking forward to seeing the new Westgate Publix transformation once it is complete next year.

“It’s going to be the newest one in Gainesville, so I think that’ll be pretty neat,” he said.

According to the building permit application, the new Publix is estimated to cost $6,257,000.

Ward said he believes the new Publix building would resemble the University Village Market location, another recently rebuilt Publix. When it’s complete, he expects the grocery store to continue to serve the surrounding neighborhoods and apartment complexes at a walkable distance.

“I have hope that this is going to be a really beneficial thing for the community,” he said.

However, people in the community have mixed thoughts about the construction, where some believe the construction is an inconvenience and disruption and others are excited to see a new Publix to shop at, Ward said.

Joseph Hardin, 20, a fourth-year computer science UF student who lives in one of the off-campus rental homes behind the Westgate Shopping Center where the new Publix is being built, said the construction began before he moved into his home.

If the nearby Publix weren’t under construction, he would be doing his grocery shopping there, he said. He hopes it will be done before he moves out so he can enjoy shopping close to home.

Camila is a reporter for WUFT News who can be reached by calling 352-392-6397 or emailing news@wuft.org.
Previous Nothing nice to say, can’t comment at all: Alachua County School District disables Facebook comments
Next Annual Strike Out Hunger food drive gifted 2,000 turkeys to Alachua County families