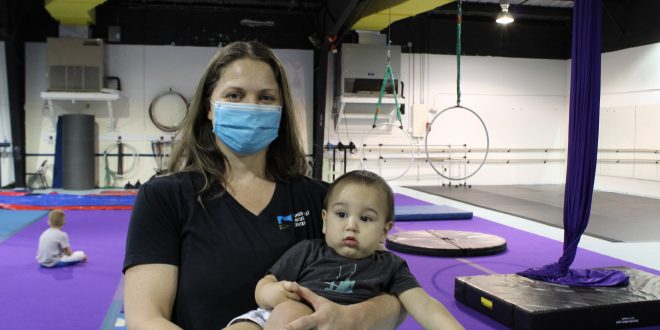 Corey Cheval, executive director of the Gainesville Circus Center, said she would use her $1,000 grant to improve set designs for live performances. (Eli Golde/WUFT News)

Johanna Weiss spent the summer generating interest in her two student bands, but without enough funding, putting together live performances seemed out of reach.

After receiving a $1,000 art grant, however, the band director of Gainesville’s Expressions Learning Arts Academy said her members are set for success.

“This grant has been absolutely a godsend,” Weiss said.

The Alachua County Arts Council recently announced four recipients for the $1,000 mini arts grants: Weiss, Corey Cheval, MusicGNV and Y-Not Theatre. Newberry and High Springs each received a $1,500 matching grant, meaning they must fundraise a portion of the money.

The grants were funded with money from “I Support the Arts” license plate sales. The county received $23,000 in unspent specialty plate proceeds from Gainesville in 2017 and awarded $7,000 of it this year.

Gina Peebles, assistant county manager and chief of staff, said the 18 applicants for the mini grants were ranked based on a rubric focused on community impact. Peebles said the grants will put seed money into the hands of local artists.

Weiss said she will use the money to supplement her two student bands, splitting $500 apiece. One group is a mariachi band called Conquistadores de la Música and comprised of 12- to 14-year-olds; the other is In Full Swing, a jazz band made up of high schoolers from Gainesville.

She said she will buy a piano amp, folding chairs and rights to copyrighted music, which can cost $50 per piece.

According to Weiss, 15-year-old Isaac Savin was an integral part of In Full Swing’s founding and remains a core member. Isaac, who plays trombone for the group, said he was grateful for the grant.

“To me, it validated the entire band,” said Savin, a 10th grader at Eastside High School.

MusicGNV, a nonprofit organization dedicated to improving opportunities for local music artists, will use the money to create a new music label called MusicGNV Records.

“This grant was a perfect opportunity to get the funding to get it off the ground,” said Jacob Adams, a founding member of the group.

MusicGNV also intends to split its funding in half, using each $500 to promote record releases of two artists through photo and video content along with news interviews.

After it recoups its expenses through vinyl and merch sales, MusicGNV will let artists own their music without it taking a cut. Then, the rest of the $500 will be used to promote a new release.

“That $1,000 could potentially be funding artists years from now,” Adams said.

Corey Cheval will use the money to improve production of her live show, Dusty’s Ragtime Circus. She said the grant will help to improve her set designs and production quality, which will help the circus gain attention.

“If you don’t have a quality sound system, and you don’t have that nice framing and set design, it’s hard to get noticed,” Cheval said. “It’s just going to further the quality of this production and make it more complete.”

Her brother, Dustin Cottrell, is the circus’ music director. He said the grant will go toward a new wooden frame for his piano.

“It’s got potential for all kinds of prop usage,” Cottrell said. “It’s definitely going to be a big part of the show.”

Paul Gabbard is the founding artistic director for Y-Not Theatre. He said the organization is dedicated to producing new American plays, compensating artists and strengthening diversity.

The mini grant will support all these elements through funding Gabbard’s touring performance program. His group will perform a live, bilingual adaptation of “Tomás and the Library Lady,” a children’s story about a young immigrant boy befriending a librarian. The group will visit county schools, parks and libraries to perform.

The two $1,500 matching grants awarded to Newberry and High Springs were originally one $3,000 grant. The two cities tied in their score, and the council decided to split the money.

Peebles said Newberry will use its grant to fund artwork on its electrical panel boxes to beautify the city, while High Springs intends to build a sculpture walkway.

“It was a win-win situation for both High Springs and Newberry,” said David Sutton, the coordinator for High Springs’ Community Redevelopment Agency and a voting member of the arts council.

Sutton said the sculptures will likely reflect his city’s connection with ecotourism, with representations of aquatic wildlife like manatees and alligators as strong candidates. He also said the walkway would allow people to get away from the hectic distractions of day-to-day life.

“Art is just one of those things that make you slow down and enjoy life,” he said.

Eliot is a reporter for WUFT News who can be reached by calling 352-392-6397 or emailing news@wuft.org.
Previous Mosquito populations and diseases rise in Alachua County
Next Gainesville to allow public parking at Midtown garage

Artistic crosswalks are coming to Northeast 15th Street in Gainesville 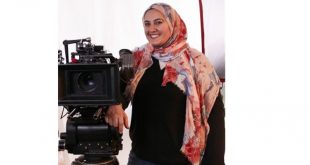 The film debuted at Gainesville’s Regal Cinemas Celebration Pointe in September, at a private screening for Iman Zawahry’s close friends and colleagues at the University of Florida, where she teaches in the College of Journalism and Mass Communications.