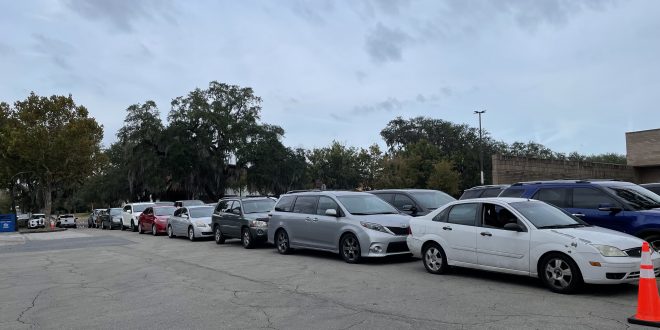 Hundreds of cars lined the parking lot of the Oaks Mall Thursday morning, waiting for one thing: food. Strike Out Hunger gave away classic Thanksgiving foods to families in need.

“I’m looking for anything they give me, and I really appreciate it,” said Roosevelt Latson, who waited in his car for almost two hours.

The annual Strike Out Hunger giveaway is organized by The Long Foundation. President and CEO of the foundation, Rodney Long, said it normally takes almost nine months to prepare for this event. But for Long, all the time and effort it takes is worth it.

“To see the expression on people’s faces and knowing that they [are] going to have food or they’re going to have a turkey for Thanksgiving,” Long said. “That’s what’s rewarding.”

Fresh turkey, canned fruits and vegetables, potatoes and boxes of macaroni and cheese are some of the items given away to families in need. Additionally, other shelf-stable items are handed out to sustain families beyond their Thanksgiving dinner, according to Long.

The Long Foundation was able to secure 2,000 turkeys this year for the giveaway with funds from Alachua County. But amidst the ongoing supply shortages nationwide, finding turkeys posed challenges in the initial planning stages.

“We were fortunate that we could partner with a local vendor that could guarantee us that they would have at least 2,000 turkeys,” Long said, “and that’s how many we are purchasing and giving away in our community.”

For community members like Soniell Sanchez, receiving a turkey was what he was most excited about. He said he is thankful for this food drive.

“People that don’t have nothing will be able to get something to eat for Thanksgiving or the holidays,” Sanchez said.

Leza Mueller, Communication and Development Director of Bread of the Mighty Food Bank, said that their initial goal was to have about 30,000 pounds of food for donation. That goal was well exceeded: The food bank provided 63,056 pounds of food ready to donate to families.

“No food will be left,” Mueller said. “Anything that hasn’t been given back during the day will go back to Bread of the Mighty because there are other people in our community and in the outlying areas that are also in need during the holidays.”

This food drive helps ease food insecurity issues in the area. Alachua County has a projected food insecurity rate of 18.9%, according to Feeding America. In addition, the past year and a half has been a rough time for many people with the COVID-19 pandemic causing widespread unemployment.

Paul Beckers, a first-time visitor at the Strike Out Hunger event, works for Amazon but saw his hours significantly reduced because of the pandemic.

“I think a lot of people during this corona period that we’ve gone through are really hurting,” Beckers said.

Beckers was most excited to receive canned goods from the food drive to help stock his pantry.

Long started the event as a member of the Alachua County Commission in 2008. While a part of the commission, some of his primary focuses were food insecurity and poverty in north central Florida.

“From there, we started a food drive every year with the community,” Long said. “We would collect food at the fairgrounds and give it to our food banks and pantries.”

Those who have a child who receives reduced cost lunches, are on food stamps, are unemployed or have been negatively impacted by COVID-19 all qualify to receive the food, according to Long.

“For a lot of families in our community, Thanksgiving meal is a daunting thing to afford,” Mueller said. “But the reality is that just a meal is hard.”

She added that Bread of the Mighty is working with grocery stores like Publix and Hitchcock’s this holiday season to be able to give out 1,600 gift cards with a $15 credit to families. Between the turkeys and gift cards, about 3,600 Alachua County families will receive food.

To find the nearest food pantries to you, visit foodpantries.org.

Zoey is a reporter for WUFT News who can be reached by calling 352-392-6397 or emailing news@wuft.org.
Previous The Westgate Publix is expected to finish construction in 2022
Next UF leaders discuss strategies to recruit more Black faculty