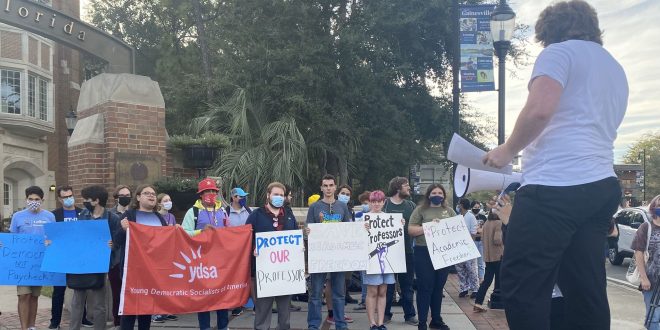 By Connor O'Bryan and Ezra Sheffield

University of Florida students chanted “UF works because we do” and “Don’t let Ron run our school” on Friday as part of a protest against potential violations of freedom of speech and academic freedom.

The protest, dubbed “Save Academic Freedom,” took place on Friday late afternoon, at the corner of 13th Street and University Avenue. It was organized by the University of Florida College Democrats, United Faculty of Florida at the UF, and the Young Democratic Socialists of America.

This protest was held in response to a recent dispute between the University of Florida and a few of its professors. The university barred political science professors Michael McDonald, Daniel Smith, and Sharon Austin from speaking as expert witnesses in a legal case against the state of Florida that would determine the fate of SB 90, a voting rights bill. This news, which quickly became public, sparked controversy, causing even more UF professors to come out and say they had also been barred from acting as expert witnesses.

The controversy has ignited a widespread debate regarding First Amendment rights. Many have argued that barring these professors is a violation of their right to freedom of speech, and concerning to faculty members’ right to academic freedom.

These potential civil rights violations have caused many students to worry about whether their own First Amendment right to freedom of speech is being protected by their university.

“We’re trying to get not only some justice for the professors, but also just trying to make sure something like this doesn’t happen, not only at the University of Florida, but on any university in the United States,” said Rachel Wolfery, a University of Florida student who also serves as the public relations director of the UF College Democrats. “I think that it is appalling that [Professor Michael McDonald] can’t put the information and the experience that he has to work.”

Sean Trainor, a lecturer of writing and public speech and UFF-UF member, spoke during the protest and said that the support from students was more than welcome.

“When students want to participate, when they are concerned for situations faculty are facing, that’s great,” Trainor said before his speech. “Your learning conditions are our working conditions, and vice versa, so any expression of solidarity is not only incredibly flattering but really moving.”

Since the initial reports about the professors’ blocked testimony, the university’s president, Kent Fuchs, reversed the decision and is allowing the professors to testify with pay.

In the same announcement, he shared the members he appointed to the academic freedom task force created to investigate the university’s procedures involving professors conducting outside work.

Since the dispute was made public, the university has made a point of reassuring students that their rights are protected. In a Nov. 1 statement, Fuchs and Provost Joe Glover stated that First Amendment rights will be protected. Furthermore, this statement also announced the appointment of a task force to review the university’s conflict of interest policy.

Connor is a reporter for WUFT News who can be reached by calling 352-392-6397 or emailing news@wuft.org.
Previous Gainesville for All volunteers share resources, survey neighborhoods in East Gainesville
Next FSU determines three professors guilty of sexual misconduct with students