Against a painted backdrop of autumn-colored oak leaves, a chorus of voices rang out to sing “Happy Birthday.”

Together, the cast of “Stirring the Leaves” and the audience celebrated the birth of their town, Micanopy, 200 years ago. But their opening night rendition was also addressed to someone specific: their playwright, Violet Asmuth, for her 92nd birthday.

There was even cake to celebrate.

Smiling faces filled the outdoor venue during the sold-out opening night of “Stirring the Leaves,” a local production celebrating Micanopy’s 200th anniversary that took place Friday at 7 p.m. An audience of about 140 people laughed, hollered and clapped as the cast performed at Thrasher Warehouse, which is part of the Micanopy Historical Society Museum located at 607 NE Cholokka Blvd.

Starring Micanopy residents, the historical fiction play gave the audience a glimpse into the town’s history, highlighting both its struggles and its triumphs.

In her opening remarks, Asmuth, a long-term resident of the town, said they chose both drama and real people of the past to present the history.

“We hope that you’ll learn and enjoy it at the same time,” she said to the audience.

Originally called Wanton, Micanopy was founded in 1821. The town was later renamed to honor Chief Micanopy, who was the head chief of the Seminole tribes. “Stirring the Leaves” explored Micanopy’s journey from its founding up until as recently as 2013.

Historic events like the Second Seminole War, the Civil War and the Great Depression were all included in the play’s storyline. The cast even depicted the arrival of the hippies, breaking into the song “Aquarius (Let the Sunshine in)” to the tune of the audience’s laughter.

“I believe she did that on every level,” Marilyn Asmuth said.

In total, the cast is made up of 18 people, but more than 50 staff members and sponsors also helped bring the play to life.

Bishop Christopher Stokes, the senior pastor at the New Beginning Christian Worship Center and the executive director of the Willie Mae Stokes Community Center, portrayed himself in the production. Except for the time he spent in the military, Stokes has been a lifelong Micanopy resident.

In the play, he describes what life was like growing up African American in the town, his return to Micanopy and the start of his ministry — New Beginning Christian Worship Center — in 2013.

Stokes said he’s excited to tell and be a part of the town’s story. “Stirring the Leaves” remembers where Micanopy has been and where it’s heading, he said.

“I love Micanopy,” he said in an interview before the play. “I do, and I want to see it reach our full potential.”

Stokes said he wants the audience to take one thing from the play: the heart of community.

Lynn Cann, whose father was born in Micanopy in the 1930s, said she loved the play, especially because she remembered moments mentioned. As a child, she recalls driving past the sculpture depicting an upside-down nude woman, which character “Professor Hollis Holbrook” — portrayed by Al Tweedy — mentioned in the production.

“We’d always slow down, and we’d look at it and go, ‘Oh my God,’” she said. “We always looked forward to driving down there so we could see it.”

Cann said the history included in the play was incredible.

“[There’s] a lot of things I didn’t know that I learned tonight,” she said.

Before and during the production, the Front Porch Backsteppers, a local string band made up of Eli Tragash, Virginia Carr and Shawn Updegrave, filled the open-air warehouse with their upbeat folk music. The audience smiled and stomped their feet to their melodies throughout the night.

“It’s just fun to play and fun to get on stage,” Tragrash said.

Carr said it’s important to honor the people who came to Micanopy and made life happen. The most rewarding part, she said, was seeing the community come together after the pandemic.

“It’s a joyful thing to be with everybody,” she said.

Rev. Les Singleton played the role of Rev. John Ley, an early Methodist minister who served Micanopy for over 50 years and was the president of the East Florida Seminary beginning in 1853.

Singleton has been a Micanopy resident for 38 years and said locals are proud to be Florida’s oldest inland town, meaning it’s located away from the coast.

“Most of us, when we move here, we leave when we die,” Singleton said.

It’s not Broadway, Singleton jokingly said, but they’ve had fun putting together a great play.

One hundred years from now, Singleton wonders what people will think when they look back on their play.

Juliana is a reporter for WUFT News who can be reached by calling 352-392-6397 or emailing news@wuft.org.
Previous Gainesville community gathers to celebrate the 20th Annual Bikers on Parade
Next With St. Augustine’s Night of Lights around the corner, a debate over horse carriages continues 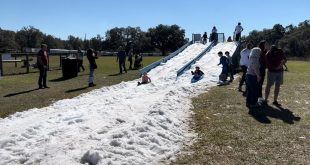 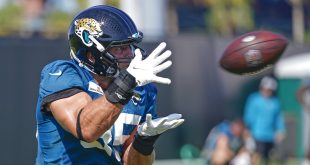