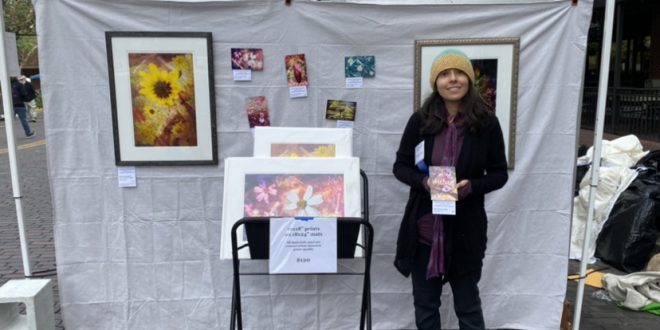 Michelle Nagri is seen in front of her artwork for sale at the art show. For this series, she did each piece one day, by taking macro photos of flowers and making textured backgrounds through apps on her phone. (Brenda Bogle/WUFT News)

When asked what normal attendance looks like at Gainesville’s Downtown Festival and Art show, Sunshine Andrei said that most of the attendance relied heavily on the weather in her seven years of experience as an organizer.

The weather was not a friend to the festival this year. Due to inclement weather, the Nov. 6 and 7 celebration was cut to a one-day event on Sunday.

“It was fun to learn and get creative and figure out how to turn this huge life festival and make it something that could be experienced on the computer,” Andrei said. “But as interesting as it was it could not possibly compare to being out at the festival walking around.”

The in-person event still kept safety and health at the forefront by spreading out the booths in order to keep as much space among attendees as they explore the artwork on display, and organizers created a designated food court area away from the festival path.

“So instead of the food booths being mixed in with the artists’ booths along the festival path it will be a dedicated food area,” Andrei said.

Last year’s festival and art show were held in a virtual format due to COVID-19. Andrei said it was an innovative undertaking and was a learning experience for all involved.

Despite the weather delays, artist Michelle Nagri said artists were still able to come in on Saturday and set up their booths from 12 p.m. to 6 p.m.

“That definitely helped so I didn’t have to get up as early this morning,” Nagri said.

Nagri has participated in the art show since 2016. She said this was the first big show she has been a part of since COVID-19.

For Nagri, the best part about the art show is the discussion and appreciation of the artists and artwork on display and for sale.

“It’s fun,” Nagri said. “Talking to people about the work and inspiring each other.”

Roger Van Lieshout, creates oil paintings that capture aspects of Florida culture.  He uses distinct story writing elements, which wrap around his pieces in some of his work.

“I started doing that as a kid,” Van Lieshout said. “You do a painting and sometimes it seems real obvious what it is, but then people go, ‘That’s interesting but what is it?’”

Van Lieshout’s colorful and imaginative work is also brought to life with special 3-D glasses that festival goes could wear to experience the art on a new level.

Another major part of the festival is the music. Entertainment director Bill Hutchinson said the musicians and bands selected to play during the festival are chosen as a way of complementing the artwork.

“We don’t have many heavy metal thrashers because the idea is to create a nice background and a soundtrack for people to be able to talk about art,” he said.

Hutchinson said the diverse performers reflect the diverse communities that come to Gainesville or the University of Florida and end up planting roots in the community.

Trisha Ingles, known as Mama Trish on the stage, had never played this particular art show before but has played similar events in the past.

“I played the Thornebrook festival over at Millhopper, but this is the first time I am doing this over here,” Ingles said. “There will probably be people wandering around from group to group playing with each other because we all play the Hoggetowne Medieval Faire.”

Joel Swan and Fred Buhl were doing just that mingling on the sidelines of Bo Didley Plaza before they prepare to take the stage.

“We are very eclectic,” Buhl said. “We play everything from Irish, Latin tunes, novelty songs from the 1950s and old swing jazz songs.”

Ingles said her music was more of an older jazz sound that blend in with a lot of other music groups.

“We push the Venn diagram out a little to include things we don’t even know,” she said.

The fusion of art and music is in full swing at the Gainesville Downtown Festival and Art show as its continues to be a place for artists and musicians alike, to showcase their talents with the local Gainesville community.

Brenda is a reporter for WUFT News who can be reached by calling 352-392-6397 or emailing news@wuft.org.
Previous Gainesville Woman’s Club Seeks Donations
Next The Point, Nov. 9, 2021: Here’s what Florida’s elected leaders have planned for next week’s special session