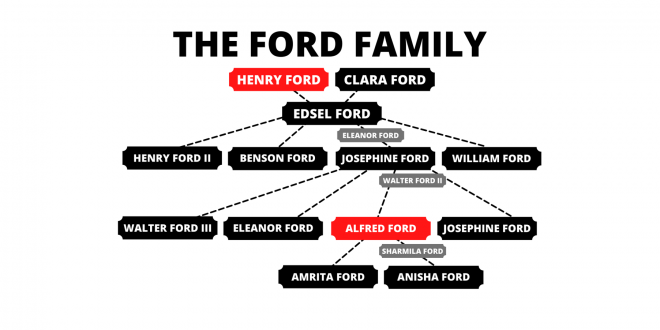 Meet Alfred Ford, the great-grandson of Henry Ford and a Gainesville resident

When most people hear the name “Ford,” they think of cars. But one heir to the company wanted to change that in his own life.

He’s doing so from his home in Gainesville.

Alfred Ford, 71, is the great-grandson of American industrialist and founder of the Ford Motor Company, Henry Ford. He was born in Detroit, Michigan, in 1950 to Josephine Ford, the only granddaughter of Henry. That was three years after Henry died in 1947.

The idea of working for the family company never appealed to Alfred Ford as he was growing up, even though members of the family, such as his grandfather, Edsel Ford, gave their lives to the business.

“I was always interested in the bigger questions. Who am I? Why am I here? How big is the universe? What’s on the other side of the universe? Who was God? What is my relationship with God?” Ford said.

He said he didn’t hear a lot of stories about his late great-grandfather. However, he did know one thing.

“Henry Ford kind of had two different sides to him,” his great-grandson said. “One of them was a genius, engineer and businessman. And the other one was a searcher after the truth and various religious paths. So I took after that side of it.”

And so Alfred Ford did that by joining the Hare Krishna movement.

The Hare Krishna movement, formally known as the International Society for Krishna Consciousness (ISKCON), was founded in 1966. It now has 500 major centers around the world for its millions of members. According to the official website of the Hare Krishna movement, the movement “belongs to the Gaudiya-Vaishnava sampradāya, a monotheistic tradition within the Vedic or Hindu culture. Philosophically it is based on the Sanskrit texts Bhagavad-gītā and the Bhagavat Purana, or Srimad Bhagavatam.”

Alfred Ford first became interested in the movement when he was 23 years old after seeing devotees chanting on the campus of Tulane University, where he studied.

“Immediately, the philosophy was very attractive to me,” Alfred Ford said.

Two years later, in 1975, he was initiated. Compared to his upbringing, which included boarding school at age 15, the Hare Krishna lifestyle was very different for him —so much that his spiritual master didn’t expect him to renounce everything.

“He knew that I was accustomed to a certain lifestyle. And when you become a Hare Krishna, you don’t necessarily have to give up everything…you utilize what you have to serve,” he said. “It’s very simple.”

Now, Alfred Ford and his wife of 37 years, Sharmila, are utilizing the family name to “help push forward the movement,” both in Gainesville and abroad. Since 2004, the couple has lived in Gainesville, and their two daughters, Anisha and Amrita, went to Oak Hall School.

One year after he was initiated into the movement, Ford had a conversation with the founder of the Hare Krishna movement, His Divine Grace A. C. Bhaktivedanta Swami Prabhupāda, in Detroit. They talked about Prabhupāda’s plans to build a big temple in Mayapur, which is the birthplace of Chaitanya Mahaprabhu, an incarnation of Krishna.

Ford said the conversation planted a seed in his heart to take up the challenge. But it wasn’t until 2009 that construction started on the Sri Mayapur Chandrodaya Mandir – Temple of the Vedic Planetarium. As chairman of the project, Ford has had to deal with several challenges over the years, such as a lack of cooperation from the communist government in West Bengal and, more recently, the pandemic.

“I put in quite a bit of seed money and that got the project off the ground,” he said. “I’m one of the people driving the agenda there, so it’s been a wonderful adventure.”

Despite all of the delays and difficulties, Ford hopes the temple opens by 2024 or 2025.

“Where I see the opening as being is when the deities, which is a form of Krishna that is in the temple that we offer our worship to, when they’re moved into the new temple from where they are now, I will consider that to be a grand opening,” Ford said. “I’m looking forward to that.”

Although Ford said most of his attention and energy is focused on the construction of the temple in India, he and his wife have stayed connected with the local Hare Krishna community in North Central Florida, which is one of the largest in the U.S.

“I just think that this community is wonderful, Gainesville and Alachua,” Ford said. “The people here are very fortunate to have such a wonderful temple and so many devotees that are doing outreach. If I was growing up here, I would feel very lucky to have so many opportunities to become enlightened.”

Ophelie is a reporter for WUFT News who can be reached by calling 352-392-6397 or emailing news@wuft.org.
Previous The Alachua County Public Schools mask mandate now runs through early December
Next Alachua Habitat for Humanity hosts Home Sweet Home bake sale