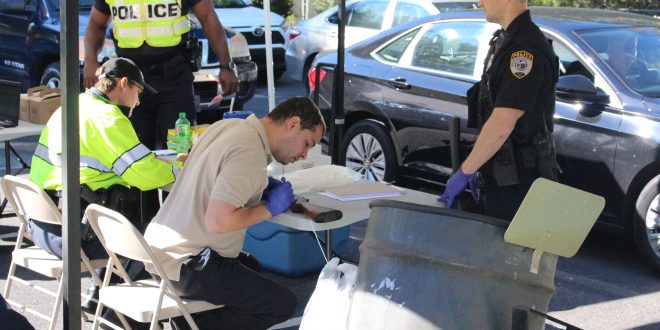 People were ordered to place the firearm they are selling in a container and put it in the back of their car before arriving.

As the donors drove into a staging area, officers removed the guns from each car, checked its serial and model numbers and placed them in a safe, provided by Big Daddy Guns, with no questions asked.

The guns are then taken back to a police station and destroyed after the event.

GPD spokesperson Graham Glover said each person who gave up their guns was promised anonymity and amnesty as provided by State Attorney Brian Kramer’s office.

“This is an opportunity for people to donate that gun without any fear of being prosecuted or arrested,” Glover said. “The goal is to reduce gun violence by taking some of these guns off the streets.”

The event comes as gun violence and violent crime rise in Gainesville.

“We’ve been trying to put out to the community, please secure your valuables, please lock your cars,” Glover said. “With guns available, people can break in and take them…, if we can get those guns off the streets… that’s a victory for the day.”

Gainesville City Commissioner Adrian Hayes-Santos supported the buyback and said it can be beneficial beyond reducing gun violence, like reduce the chance of a child accessing a gun in easy to reach places.

“Getting them off from people’s homes and off the streets is good,” Hayes-Santos said. “It doesn’t hurt anybody by letting people sell guns that they don’t want anymore.”

The buyback, however, garnered some criticisms when GPD posted about it on social media. Some users said buybacks are ineffective in decreasing gun violence.

“GPD is perpetuating a fraud in claiming this will reduce gun violence,” one user wrote.

However, an analysis in 2019 suggests that gun buybacks should be included in broader violence reduction strategies. The analysis claimed that when paired with other methods, buybacks are effective in reducing the number of firearms that may lead to a casualty

Darry Llyod, the chief investigator of state attorney Brian Kramer’s office, said the goal of the buybacks is to have conversations with the community to make Gainesville safer.

“By itself, the gun buyback does not reduce crime,” Llyod said. “But along with other plans that the city of Gainesville and Chief Jones have introduced, we’re hoping that it (buybacks) does reduce crime.”

Llyod said this is the first time since 2019 that GPD has done a gun buyback due to the coronavirus pandemic. He said the state attorney’s office is in conversations with other police departments in Alachua County to restart gun buybacks across the jurisdiction.

GPD allocated $15,000 for Saturday’s event. Glover said there may be more buybacks in the future if funding isn’t an issue.

Jake is a reporter for WUFT News who can be reached by calling 352-392-6397 or emailing news@wuft.org.
Previous Gainesville’s regional transit system is reducing service
Next UF subpoenaed for student athlete records in an antitrust lawsuit against the NCAA