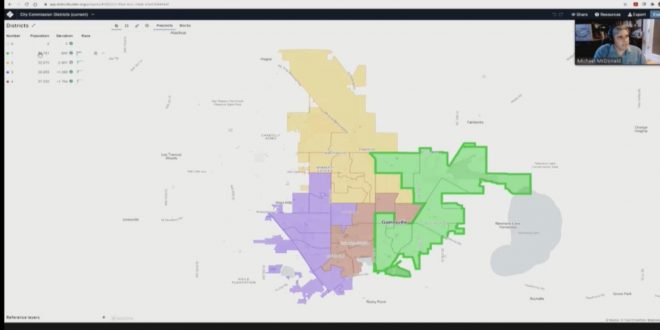 City officials hosted a webinar via Zoom on Monday to demonstrate the use of the DistrictBuilder tool that will allow residents to draw and submit their own district maps.

The commission will review residents’ maps and, along with a team of consultants, create the final district map for this redistricting cycle.

Redistricting is required within two years of each U.S. Census. The census, taken every 10 years, helps illustrate how populations in districts change and is used to create optimal districts. Gainesville’s last redistricting happened in 2012.

The final map will follow guidelines outlined in the redistricting resolution the commission approved at last Thursday’s meeting.

“This is nothing the city of Gainesville made up,” senior assistant city attorney, Sean McDermott, said while presenting the guidelines. “It is really just an articulation of federal case law and what’s required when any local government or municipality engages in redistricting.”

There are eight guidelines in total, but only two, according to McDermott, are required to be met: each district’s population cannot deviate by more than 10% from each other, and each district must satisfy the Voting Rights Act.

The new map can’t dilute any minority group to the point that their votes are unable to elect a candidate they cast a majority of votes for.

Other guidelines address issues such as district compactness and contiguity — that all parts of a district should be connected with no islands. The city will also attempt to follow geographical and political boundaries without separating communities of interest.

University of Florida political science professor Michael McDonald, who helped create DistrictBuilder and has worked on redistricting at all levels of government, showed a brief tutorial on how to use his mapping tool. He explained how the city is broken up into census blocks by the census bureau and into precincts by the county.

Residents can use these different breakdowns to redraw the districts while still following the guidelines from the resolution. Their district maps will be featured on the Gainesville section of DistrictBuilder as soon as they are submitted.

Together the two will present three maps to the city commission for review in January. These maps will be based on the pair’s own research as well as input from community-submitted maps.

According to McDonald, it is important that the public provide input for redistricting to ensure a good representation.

“It’s good to have participation from the public as part of the process,” McDonald said in an interview prior to the webinar. “That way, members of the public can articulate what they think how districts should be drawn that best represents their communities”

McDonald is not anticipating any drastic changes to the current map but also says it’s difficult to say before they start proper research.

Currently, DistrictBuilder only flags District 2 for being under the population margin of 10%.

Despite his district being the most likely to see changes, Commissioner Harvey Ward, who represents District 2 says he is not expecting the changes to have a big impact on city commission elections.

“Being elected as a commissioner in Gainesville still is a matter of who is willing to go out and knock on doors, regardless of which district it is,” he said in an interview Friday.

Residents have until January to submit maps to the commission before McDonald and Smith present their three suggested maps for commission review, but the commission will still be accepting and reviewing community suggestions up until the final vote at the end of April.

Residents can find the full redistricting resolution, link to the Gainesville DistrictBuilder page and more information regarding redistricting here.

Video below by Ophelie Jacobson and Macie Goldfarb:

Ezra is a reporter for WUFT News who can be reached by calling 352-392-6397 or emailing news@wuft.org.
Previous The Point, Oct. 27, 2021: Redistricting Gainesville’s election boundaries now involves the public
Next Through nature walks around Gainesville, the Joy Walk Club provides a space for relaxation and connection