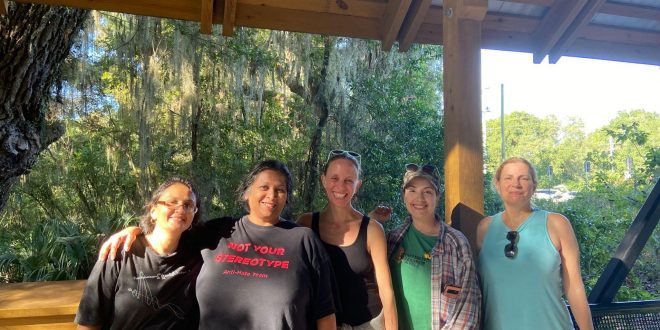 The air at Sweetwater Wetlands Park in Gainesville is crisp and sweet as six women trek along its paths. After several minutes spent pointing out alligators hidden below the surface and admiring the weather, they meet a fork in the trail.

This question is crucial to the group because feeling good is the club’s goal. Called the Joy Walk Club, it is a group to spark some joy in life by building community in nature.

Having to do work online, apart from people, took its toll on Parmar, which led her and Cassandra Tucci, a Gainesville activist, to create the Joy Walk Club. The two knew each other through their activist work with North Central Florida Indivisible and had taken walks together frequently. They decided more people could use some joy and decided to host these walks which occur in different areas around Gainesville to ensure accessibility. The date, time and location for each walk is advertised on North Central Florida Indivisible’s Facebook page.

“Jyoti and I just were talking one day and were like, everybody needs this,” Tucci said.

“We missed that emotional fullness of actually meeting somebody in person and being able to read their body language,” Parmar said. “We have not had that opportunity for almost two years now.”

The Sweetwater Wetlands meetup on Sept. 30 was the club’s second meet-up. As the women walked, they shared funny stories and sad ones. They spoke about overcoming loss and raising teenagers.

The first walk was on Sept. 22 at Depot Park in Gainesville. The gathering had only three people, but Parmar’s wishes for the walk were met. It reminded her of what is good in the world, she said, as the group marveled at flowers and bees and spoke about family and friends.

They want the club to have no affiliation and be open to anyone seeking joy regardless of their beliefs or background.

She believes the COVID-19 pandemic has increased tension in this work, especially within education. Divisiveness over mask mandates, rezoning and equity have been the source of constant fighting for almost two years since the pandemic started, she said.

The Joy Walk Club allows her to temporarily escape from this.

“I always love being in nature,” Tucci said. “My heart is always lighter, just being outside.”

The walks feel intimate despite many of the attendees being strangers, and the women displayed vulnerability right from the start. Tucci said she was able to learn so much about the other people on the walk, even those who may hold different beliefs than her.

“I think, being outside, being in each other’s presence — even just noticing, little things about people… I really appreciated all the little things,” she said.

She believes the Joy Walk Club will allow people to focus on more positive things and accept others despite differences.

“I hope it will be a place that just feels safe, you know, out in the open, and no expectations,” Tucci said.

The gathering did exactly that for Mary Benedict, a 56-year-old Alachua County resident and president of the Alachua County Parent-Teacher Association.

Like Tucci and Parmar, Benedict believes that COVID-19 has taken a toll on everybody, especially those involved in schools. There has been a lot of negative news within ACPS. Most recently, several schools received recurring bomb threats.

“Our whole school community I think is exhausted,” Benedict said. “There’s just so much on everyone’s plates. So stepping outside and talking with parents about other things helps to relieve that stress and brings me back fresh to start another day.”

It took Benedict a few minutes to begin to relax and open up while on the walk. But when she did, she was amazed.

“I think when you step outside, I noticed that right away your breathing slows,” she said. “I think your mind slows, and you start to use more of your senses. I stopped in silence and just listened.”

When she did, she felt better for the rest of the day, she said.

The walk at Sweetwater Wetlands made her feel more connected to her community and allowed her to talk to people with different perspectives in a safe way, Benedict said. It was also a great opportunity for networking and finding people to collaborate with projects and addressing issues within schools, she said.

Lucille is a reporter for WUFT News who can be reached by calling 352-392-6397 or emailing news@wuft.org.
Previous You can now help redistrict the city of Gainesville
Next Halloween isn’t the only day in costume for these dystopia role players

The Junior League of Gainesville will transform on Saturday Gainesville’s Trinity United Methodist Church into a store where everything is free for its annual Miracle on Main Street event.