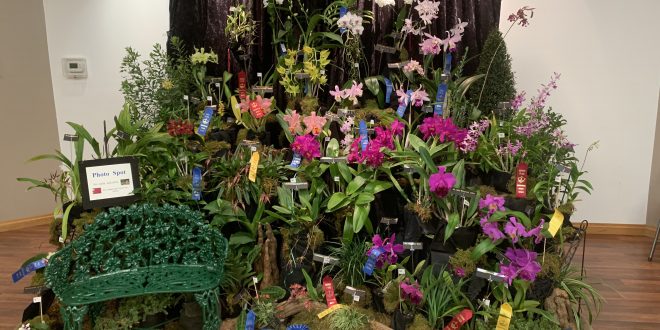 Blooming petals and green stems of orchid flowers stood out starkly in front of the black curtain backdrop. Blue and red ribbons hung from the pots of awarded plants. Children and adults alike peered at the orchid displays, looking closely at each leaf and bloom. Outside, people walked around the trails with friends and family, carrying newly bought plants in their hands and bags.

The Kanapaha Botanical Garden celebrated its 35th anniversary with its annual open house fall plant sale on Oct. 23 and 24. The event included an orchid show in partnership with the Gainesville Orchid Society.

Alex Caffrey, director of Kanapaha Botanical Gardens, said the garden has hosted the annual plant sale and open house every year since October of 1984, except for the 2020 hiatus due to the pandemic. This will be the garden’s first event in over a year, and she said the small Kanapaha Botanical Garden staff have been working hard, taking on multiple roles to put the event together.

“I’m the primary person that organizes the fall plant sale and it starts from getting the application online, accepting the application, [then] relaying information to the vendors about the guidelines for setting up,” Caffrey said. “During the show [I’m] coordinating it with all of the staff to make sure it runs smoothly.”

Caffrey said vendors came from all over Florida: locally from Gainesville and Alachua County, and farther away, including Ocala, High Springs, Tampa and Keystone Heights. The event is free and usually attracts about 5,000 people to enjoy the gardens, view the orchid displays and buy from the vendors.

“I do love that this is an opportunity for anybody to be able to come out to the gardens,” Caffrey said.

Gainesville Orchid Society President Julie Graddy helped stage the orchid show full of 70 blooming flowers. She said that putting together the display was a team effort and a labor of love.

The Gainesville Orchid Society was organized in the early 1960s by a group of approximately 15 orchid enthusiasts. Since then, the organization has expanded to more than one hundred members who share a range of orchid expertise from hobbyists to commercial growers. The society has been involved with the Kanapaha Botanical Garden’s open house and plant sale for about 15 years, Graddy said.

“I think the members want to share their passion and pastime so that the community can enjoy their variety and beauty,” Graddy wrote in an email.

Michael Wright, the chair of judging at the American Orchid Society, traveled from Tallahassee to be a judge at the orchid show. He has been an orchid judge for about 15 years.

“There’s always something new and interesting to see because everybody grows things a little differently,” Wright said.

Flowers and exhibits are judged on factors such as quality, overall arrangement, balance and colors among others, he said. There are various awards in different categories such as best hybrid orchid, best miniature orchid, best in show and best in species, to name a few. He said there is a diverse blend of flowers and various orchid plants.

In addition to the beautiful plant life, the people at the event are also a highlight for Wright.

“One thing about growing orchids is that I’ve gotten to meet people from all over the world,” Wright said. “The friends that I’ve made here in Gainesville; they’re always very welcoming.”

Michelle is a reporter for WUFT News who can be reached by calling 352-392-6397 or emailing news@wuft.org.
Previous See the data: FDOH, CDC release new vaccination, community transmission rates
Next European cars come to Gainesville for event at Butler Plaza