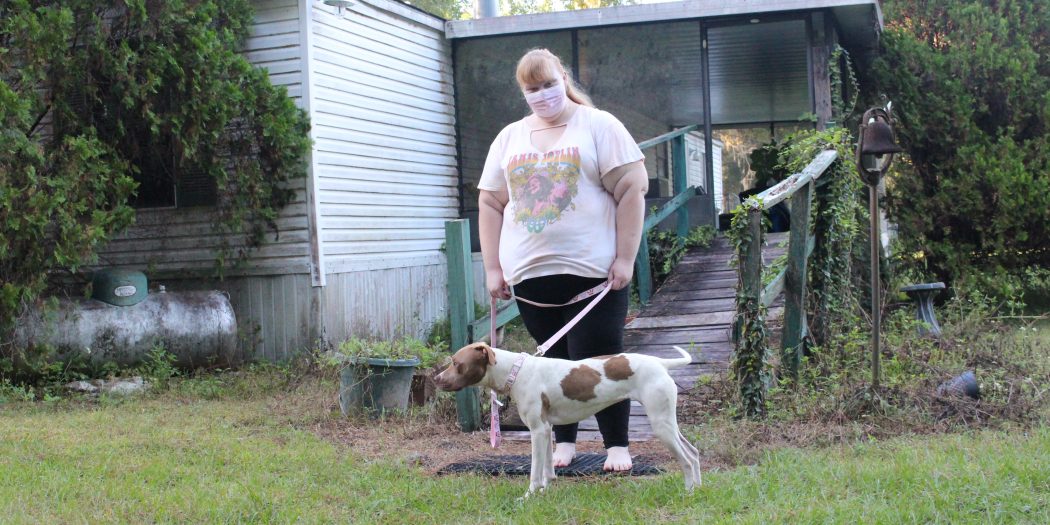 Another rainstorm means another bucket to fill for a Hawthorne family inside their mobile home.

Hurricane Irma left a family’s home beyond repair in 2017.

The damages caused moisture to accumulate over the years, creating a severe mold problem that has gotten progressively worse.

Now, they are calling on Alachua County to reverse an old rule so that they can replace their mold-infested home.

Lollie Chapman, 18, said the mold got so bad that it opened holes on the roof, dampened the floors and broke the front door, but she’s more worried about her 62-year-old mom, Leah Chapman, who is always sick from breathing in the fungi.

“My mom does not smoke,” she said. “She’s never smoked a day in her life, but she has a smoker’s cough because she’s constantly in contact with all of this.”

Lollie also said she has mold growing in her ears and is in constant pain every day.

“I told my mom I’m gonna die in this house,” she said.

Aside from her mother, Lollie worries about her dog and two cats. The mold already took the life of her service dog in February.

Lollie said Rebuild Florida gave them a new mobile home to replace the old one. However, Alachua County won’t sign off on replacing the new home because the current home was placed on the property on a hardship variance 27 years ago.

She said these variances were usually temporary and meant for family members to move onto a property and take care of other sick family members.

“The board of adjustment, which also no longer exists in the county, have issued the hardship variance to Leah Chapman’s father… for them (his family) to take care of him, and it was to be removed once the hardship was no longer,” she said.

However, the variance never got removed since it was issued in 1993, and Leah and Lollie used the secondary home as a place to live.

Daniels said the county no longer issues hardship variances, but the old rule still prohibits the county from issuing a building permit.

She said the county gave the Chapmans a few options: place the mobile home on a close relative’s property, buy a new piece of land or replace the primary mobile home on their property.

However, Lollie said the primary mobile home is occupied by her uncle, and the other options are not affordable.

She said she works 10 hours a week because she is still in high school, and if they were to buy another property, she may have to give up her dreams for the future.

“I want to go to college,” Lollie said. “Right now, unless I go on scholarships, we have to use all of the money that we have saved for my college funds.”

However, Daniels said they could only take public comment at that time and consider it for a vote later.

“It’s gonna take probably the presentation and some back and forth because it brings in different issues,” she said.  “They have to hear the discussion and make decisions as a board.

Daniels said the county commissioners will vote Nov. 2 on whether to change the rule so that this isn’t an issue for other mobile homeowners.

Jake is a reporter for WUFT News who can be reached by calling 352-392-6397 or emailing news@wuft.org.
Previous The Point, Oct. 22, 2021: The first of Florida’s voter-approved minimum wage increases is now in effect
Next Alachua County commissioners decided to continue giving out $25 gift cards to people who get vaccinated