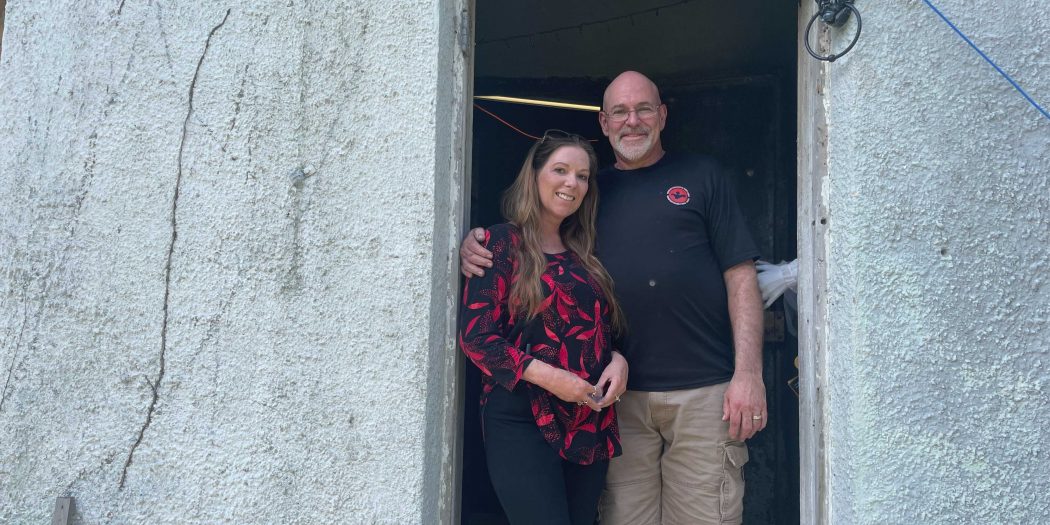 Cheryl and Lee Irwin stand just inside the threshold of one of their properties, the Old Gilchrist County Jail. Together, they are cleaning the space and helping to establish it as a paranormal destination. (Avery Lotz/WUFT News)

Nicole Sigers and Eric Penfield have grown accustomed to encounters with the unexplainable.

Just weeks ago, the back window of Penfield’s car shattered in the garage of his O’Brien, Florida, home — right next to a shelf of loved ones’ ashes. Often, the pair finds the television on at 3 a.m. while they both remember turning it off, and cups of soda and coffee seem to move on their own.

Despite their experiences with the paranormal world, Sigers felt uncomfortable in the Old Gilchrist County Jail. She refused to enter the abandoned cells.

“I stayed in the hallways where I couldn’t be entrapped,” she said. “Then I got my butt out of there.”

Sigers was one of around 40 attendees who gathered beneath low-hanging moss at Spooktober Rock, a classic rock concert and historical tour held last Saturday evening on the grounds of Trenton’s notoriously haunted Old Gilchrist County Jail. It was the first event planned by Cheryl and Lee Irwin, the couple who bought the jail and surrounding property last June.

The coed jail, located at 313 NW Second St. in Trenton, operated from 1928 to 1968. Though invasive vines hide the concrete walls and a handful of Halloween props decorate the exterior, the structure has remained the same since it housed inmates — though visitors say the design is not the only thing that remains.

Daytona Beach-based band RedGate performed a nearly 4-hour set while guests made their way through the haunted jail for tours led by Lee Irwin.

Sigers and Penfield were two of the first to enter the jail on Saturday. As evening crept closer, more groups passed the jagged gray threshold.

Tyler Laborde, a Newberry resident, said he visited the jail at least three times before Saturday’s event. Though he believes in the paranormal, he thinks the property’s history is fascinating enough to draw in skeptics.

“This is not a movie set or a prop,” he said. “People were really held here.”

Along with the disembodied footsteps and moving objects he has witnessed in the past, he said Spooktober Rock left him feeling like “a kid in a candy store.”

The turnout was smaller than anticipated, but co-owner Lee Irwin said events like these are not targeted at generating revenue. His main goal is to tell the stories of the formerly incarcerated residents and shed light on the poor conditions they endured.

Until 1966, law enforcement officers left inmates unsupervised in the jail’s eight cells every night from 6 p.m. to 6 a.m., which resulted in violence among those who were kept there, Lee said. In the summer, the Florida heat would seep through the building with no air conditioning for relief.

Singing with the spirits

RedGate guitarist Ron Poulin and Lee have been friends since Lee was 15, Poulin said. The musician also installed new thermal cameras in the jail after working in surveillance technology for 40 years.

Poulin and his wife have both experienced vertigo in the building, which quickly sent his wife running out the door. She has yet to return, but Poulin said he was not afraid to enter the jail Saturday.

“These aren’t demons here,” he said. “They’re not dangerous; they’re not evil.”

The band hopes to make the trip to the unorthodox venue an annual event.

This was the first concert held on the jail’s grounds, Lee said. But hearing music echo throughout the property is not uncommon — Lee queues a mix of Johnny Cash and swing music for the spirits within the jail when the couple or investigators are away. When he’s there alone, he often practices the didgeridoo, a long tube instrument that originates from Aboriginal people in Australia, for his captive audience.

“I play them a lot of their music,” he said. “If a nonbeliever would see me singing and dancing and whistling with the spirits, they would probably think there’s something really wrong with me — I’m OK with that.”

The jail’s previous owner of 15 years, Arlene Hale, held mini investigations the weekend before Halloween and hosted professional groups that investigate the supernatural. The Irwins plan to continue these traditions, but they also want to foster community engagement with a public approach to ownership.

Cheryl Irwin said once the sheriff’s quarters are renovated, the pair hopes to rent the space as an Airbnb.

Cheryl and Lee saw the listing for the eight-bed, eight-bath jail in April. Although the jail was three hours from the Irwin’s Sarasota home, Cheryl said the rumors of ghostly residents were too compelling to ignore.

Both Irwins have a strong connection to the paranormal world.

Cheryl’s mother was a psychic medium who always seemed to know the childhood trouble her daughter was getting into before seeing it for herself, Cheryl said.

Lee remembers watching the glass doorknobs in his childhood New Jersey home swivel though no one stood on the other side.

When the property went up for sale, the Irwins didn’t hesitate.

The couple has offered two to three investigations a week since buying the property, and only one visitor did not have an unexplainable experience, Cheryl said. In early October, a group of three skeptics booked an investigation — and after one had her hair touched while blindfolded in a cell, the group left as believers.

Professional ghost hunters and celebrity investigators have visited the property, but ordinary people wishing to learn about the paranormal in a safe way are the couple’s target audience, she said, adding that they also plan to make an app where subscribers can view curated footage caught on thermal cameras inside the building.

“I would love to share this with everyone and anyone that would like to see if they can have some kind of experience in a very active place,” she said. “And my jail is very active.”

Avery is a reporter for WUFT News who can be reached by calling 352-392-6397 or emailing news@wuft.org.
Previous Rebuilding Together North Central Florida begins remodeling homes
Next Grassroots Motorsports Challenge underway