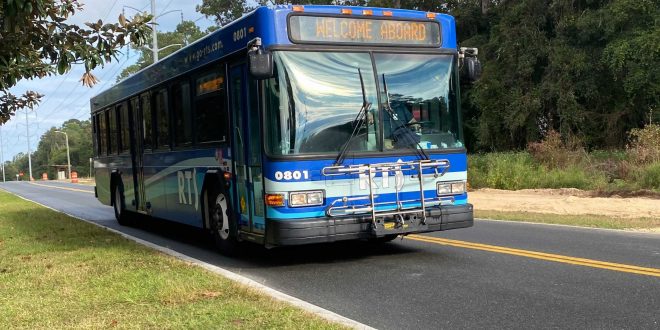 Gainesville Regional Transit system is now free for anyone 65 and older or 18 and under, making it easier for residents like Marie Stanley to visit her grandchildren across town. (Jake Reyes/WUFT News)

October 20, 2021 Getting around, Government and politics

Marie Stanley used to spend hours a day at home playing Animal Crossing on her Nintendo Switch as a way to have fun.

Now, the 68-year-old southwest Gainesville resident is listening to fewer singing animals and more live music in downtown Gainesville since she no longer has to spend a penny on bus fares.

“It’s wonderful,” she said. “It helps me socialize more. I can go out in the evening and enjoy sitting outside at restaurants downtown, like at Loosey’s.”

Since Oct. 1, anyone over the age of 65 and under the age of 18 can ride the Gainesville Regional Transit System for free until Sept. 30, 2022, as part of a new program.

City of Gainesville spokesperson Rossana Passaniti said riders are not required to show proof of their age when they board the bus.

According to an RTS press release, both the Gainesville City Commission and Alachua County Commission approved an agreement to jointly fund a new, one-year RTS pilot program.

Alachua County spokesperson Mark Sexton said $230,000 was allocated toward this program. He said the city and county split the funding by 50%; each paid $115,000.

However, the new free fare transit program does not include Gator Aider transit, which is a service that takes riders from various locations to Ben Hill Griffin Stadium during Gator football games.

In addition, he said the new program will help reduce transportation costs for riders in those age groups.

Stanley has been enjoying the free fare since it began and said it makes a huge difference for her.

Besides venturing out to downtown Gainesville to socialize again, she said the new program makes it easier to be with her grandchildren who live in East Gainesville.

Stanley said she only gets paid $1,010 a month for disabilities after she was diagnosed with cancer in 2006.

Although Stanley no longer has cancer, she said the treatments for it left her with scars, arthritis and other pains that make it hard for her to transport groceries to her home. She said she has no choice but to take the bus to accommodate for these pains.

“I use a granny cart to go just up to Winn Dixie… but then I come back down with heavy grocery carts, and I’m already tired,” she said. “Being able to sit down and wait for the bus and ride, just one even half a block is huge. It’s a huge difference.”

Although the program ends next year, Hayes-Santos said commissioners may consider renewing the service again. He said they will consider the overall cost of the program and evaluate how often the community uses it.

Stanley said she hopes the free fare is here to stay for the long term in Gainesville.

“I think it’s wonderful,” she said. “I hope they (city commissioners) get enough positive feedback and that people keep using it so they will keep it.”

Jake is a reporter for WUFT News who can be reached by calling 352-392-6397 or emailing news@wuft.org.
Previous Nikolas Cruz pleads guilty to the massacre at Marjory Stoneman Douglas High School
Next Alachua County School Board moves forward with redistricting plan