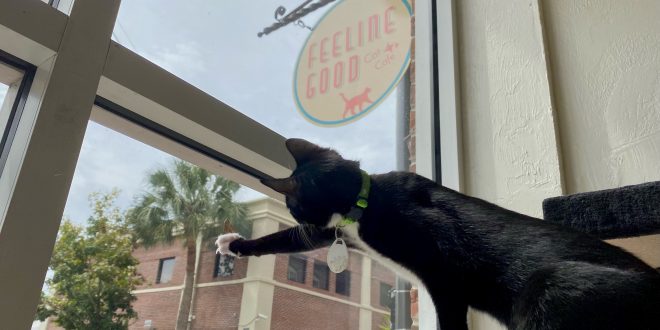 Panini, a 4-month-old tuxedo cat, tapped his paw against the front window as guests walked by to enter Feeline Good Cat Café in downtown Gainesville.

Inside the café, Panini shares a room with 10 other cats awaiting adoption, as the smell of fresh coffee and pastries fill the cafe. The felines sit comfortably on a couch, run up and down the cat post, and scale the playground wall as they wait for customers to play with them.

Feeline Good Cat Café is a partner of the Humane Society of North Central Florida. In a little more than 100 days since the café opened in June, about 115 cats have been adopted, according to marketing and bookkeeping manager Gabby Hall.

“Our family has always been the ultimate crew of cat lovers,” Gabby Hall said. “We’ve always had cats at home since our early teens.”

Cat cafés are spreading quickly across the country.

The first of its kind, Cat Flower Garden, opened in Taiwan in 1998, according to Mental Floss. The concept began as pop-up shops in the U.S., until 2014 when the first permanent cat café, Cat Town Café, opened in Oakland, California. There were 43 more by 2018, and CNN reported more than 125 in 2019.

Florida now has 10 and counting.

“We’ve seen cat cafés pop up in pretty much every major city,” said Katie Logue, who owns Tally Cat Café in Tallahassee. “They are growing in popularity, and you can see that every shelter they partner with definitely increases their cat adoptions.”

The primary focus is to find homes for cats. Most of the cafés partner with local animal shelters, with all proceeds reinvested directly into the shelters. The café itself makes money off its sales of coffee, pastries, donations and admission fees. Tally Cat Café partners with the Leon County Humane Society; they have helped find permanent homes for more than 1,000 cats.

When the pandemic began, Logue had to close her café and foster kittens. Over the last year, however, the café experienced a huge adoption boost.

“We went from doing five adoptions a week to 15,” she said. “That’s pretty crazy.”

Phil Arkow, coordinator of the National Link Coalition, a nonprofit based in North Carolina and which works to stop violence against people and animals, said he considers cat cafés a form of animal-assisted activity and sees the potential for growth as an industry.

“It’s a fur fix,” Arkow said. “It certainly has a benefit of being a stress reducer for people who go there.”

The success of adoptions for cat cafés is no coincidence -- at shelters people choose a cat based off appearance but not personality, said owner of the Orlando Cat Café Sandra Cagan.

“At a cat café, you get to come in, play with the cats, and see how they react to people and other animals,” Cagan said. “People can come in and see their personalities, and get a cat that is suited for them. It’s just a better way.”

As her 50th birthday approached in 2015, Cagan thought about how she wanted to give back to her community and leave a legacy. After seeing a TV news story about a cat café in New York, she opened hers as the first in Florida in 2016. It has adopted out more than 1,500 cats since then.

While cat cafés are business ventures, they are also satisfying lifelong passions. Angeli Rodriguez was working a corporate job before opening The Witty Whisker Cat Café in 2020.

“I decided to put my MBA to use and write up a business plan,” Rodriguez said.

Before opening hers, Rodriguez visited six cat cafés across the U.S. The Witty Whisker houses up to 15 cats at a time. Guests can enter the cat lounge for a fee of $10 per hour. The adoption fees are set by Feline Canopy of Care, a shelter in St. Augustine. Kittens and cats up to 4 years old cost $135, cats from 4 to 10 years old cost $110 and cats over 10 years old cost $95.

Orange cats and Siamese cats are the most popular breeds at the café, Rodriguez said.

Not all cat cafés have the same approach to adoptions. Tammy King said she opened The Caffeinated Cat, in Jacksonville Beach in 2019, out of desperation. King also directs Mayport Cats, a nonprofit organization dedicated to the health and welfare of feral and abandoned cats.

“Donations began to plummet, and medical costs tripled … quadrupled,” she said. “In order to continue helping these cats, we needed a way to raise these funds.”

The Caffeinated Cat receives about 50 visits per day during the week. Because it is also a rescue, there is no admission charge to interact with the cats. King said her main goal is to educate the community about cats and help them gain more popularity.

The café houses up to 26 cats at a time, however, four of them – each with their own special story – are considered employees and cannot be adopted.

“They are my daily reminder to keep myself humble, stay within my mission and focus on the cats,” King said.

Arroyo and her husband Omar both grew up with cats, but did not have any plans to adopt. Arroyo heard about the cat café from one of her best friends and visited with her daughters Khamil, 11, and Khiara, 9, one day when bad weather canceled their original plans.

On their second visit, they saw Luna Sophia.

“She chose us,” Arroyo said.

The Arroyos adopted Luna Sophia on their third visit.

“The girls love visiting the kitty cabana and getting their cat-shaped cookies,” Arroyo said. “My youngest daughter even wanted to celebrate her birthday at the café.”

Hunter Malin adopted his domestic short hair, Minnie, from The Witty Whisker in March. He had no interest in adopting a cat, but his daughter, Lexi, 18, suggested visiting the café.

Minnie stood out to the Malins. After a second visit, they adopted her.

“He had been there for about three months,” Combs said. “Every time I saw him, I fell in love with him more, so we finally adopted him.”

Lexie is a reporter for WUFT News who can be reached by calling 352-392-6397 or emailing news@wuft.org.
Previous Florida Department of Health is investigating Mayor Lauren Poe, Alachua County officials for violating vaccine passport law
Next Violent crimes are increasing in Gainesville, police department is addressing the community today