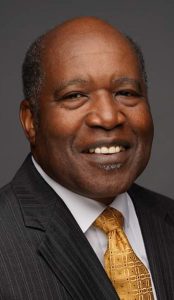 Scherwin Henry has served on multiple city, county and community boards in Gainesville for over 25 years. While he was the Gainesville city commissioner for District 1 from 2006 to 2012, he was able to get funding to build Cone Park and worked to bring the Walmart Supercenter to East Gainesville.

During his political career, he worked at the University of Florida for 40 years in different capacities before retiring as a senior biological scientist.

After Commissioner Gail Johnson announced that she was resigning from her position with three years left in her term, Henry decided to run again.

He spoke with WUFT reporter Jacquelyn Deo about his goals and what he hopes to achieve in the position as an at-large commissioner.

Click here to also read about the candidacies of three of his opponents.

Editor’s note: This interview has been edited for length and clarity.

Can you walk me through your decision to run?

My decision to run actually originated from a number of things. Number one, the dysfunction that’s happening at City Hall. It’s not what we need right now for the city of Gainesville to have the city commission governing in that manner. Number two, I’m a former two-term District 1 Gainesville City Commissioner. And for me, there’s still work to be done that I would like to see happen in the city of Gainesville. But number three, the most important thing of all, is that this election really represents and really impacts the future of the city of Gainesville.

What issues do you hope to address in the position?

On the staffing shortage after recent resignations

Currently, the city manager resigned, his last day is November 26 ─ if I remember correctly ─ and we also need a city attorney. Right now we do have an interim, but before we can do anything, we actually need to have the best and the right personnel to get things done. Now, for me, it’s very important that we put the city in a position to grow.

I know that we will have applicants, but it’s important to choose the right fit for this time. And for me, we will need a city manager that will come in and actually implement the vision that the City Commission has for this city. One priority will be the redevelopment of our downtown as well as the East Gainesville community.

On GRU and Gainesville’s economy

GRU and the city of Gainesville will have to agree on possibly decreasing the general fund transfer that the city receives from GRU. We as a city need to look at generating other sources of revenue, and not just depending on GRU, to support city government. And we can do that by investing and redeveloping in our intercity core, which includes downtown, which includes the East Gainesville community, as well as the Pleasant Street and Fifth Avenue community.

We also need to do more to support our local homegrown businesses. To me, during the pandemic, they were the foundation of our economy. A number of places shut down due to a lack of staff or some of them just didn’t have the money to continue and they went out of business. And when you think about the economy of our city, the local businesses are really what generate the economic income; they are the economic engine. I know people will think, “Well, we have the University of Florida here and we have Santa Fe,” yes, that’s fine, but those entities can’t employ everyone.

Local businesses are the ones that generate the blue-collar jobs as well as the white-collar jobs. More times than not, they are the ones that give families the one-up to move from poverty and to sustain their quality of life in a very good manner. Right now, we need to look at ways that we can make the lives of the families and citizens of our fine city better.

Are there any specific projects of Commissioner Johnson’s that you hope to bring to completion?

Well, we do need to continue the progress in the diversity and equity disparity. That’s very important, and I would like to see us continue with that. I also would like us to really look into stabilizing the economic opportunity office as well, because that really seems to be continually unstable over the years.

In her resignation, Commissioner Johnson cited an inability to make systemic change because of a majority of the decisions from the commission and the working environment of city administration. Do you share these concerns? How do you plan to approach those obstacles?

I share those concerns to a degree, but I am one who can build consensus. And what I’ve seen from the city of Gainesville is ─ number one ─ there is no collegiality there. Number two, it really seems to be fragmented and there needs to be someone to take the lead, to be able to articulate and have their colleagues understand that we are working on behalf of the citizens of the city of Gainesville. And so, in my opinion, if you’re able to articulate your vision into a direction that your colleagues can buy into, you are able to get things done.

For instance, I was able to explain to my colleagues during my term as District 1 City Commissioner ─ number one ─ the importance of doing this. But number two, to articulate how East Gainesville, over decades, had been neglected. Number three, East Gainesville citizens pay taxes just like everyone else in the city and they deserve to be considered, to be supported and to share in the prosperity of this community.

This election really is one of the most important elections that we’re going to have in recent history. And the person that’s elected needs to have a vision as to where they would like to see the city go. Also, they need to listen to the citizens and what their desires are, and what they would like to see happen as well. This experience is an all inclusive experience. It’s important to understand the needs of the citizens and have a vision of where you would like to go in cooperating with those needs, desires and wants of citizens and your platform as well.

And so that’s what I would like the voters to know that I am dedicated as you can tell from my relationship with my wife of 50 years. I’m committed, as you can tell from my experience working at the University of Florida for 40 years as well. And I do have the experience. I’ve served on numerous boards, the Eastside School advisory board, and I’m currently on the board of Neighborhood Housing and Development Corporation, etc. I’m serving also on the Alachua County Library Trustee board as well.

Jacquelyn is a reporter for WUFT News who can be reached by calling 352-392-6397 or emailing news@wuft.org.
Previous Writers Alliance of Gainesville hosts upcoming Zoom reading of its annual literary review
Next These five people are running to become Gainesville’s next city commissioner in 2021