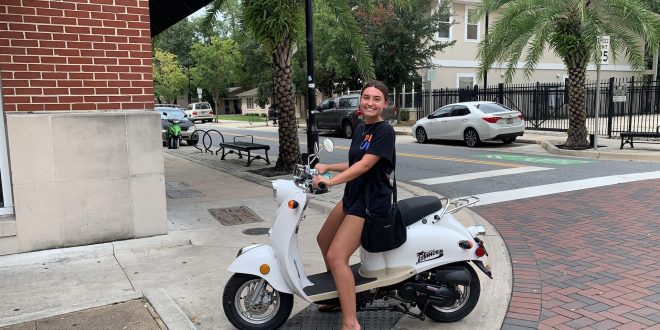 Bright pastel scooters are again filling the roads with buzzing engines and squeaking horns throughout the University of Florida campus and surrounding areas. From a baby blue Vespa to a matte black Genuine Buddy 50, scooters are a prevalent mode of transportation for students and residents in Gainesville.

This June, Emily Beasley, a 19-year-old psychology major at UF, bought herself a white Wolf RX-50 from New Scooters 4 Less. Her purchase is part of the significant increase in scooter sales as students come back to campus.

Since the onset of the pandemic in 2020, Collin Austin, the 39-year-old founder of New Scooters 4 Less, saw his business’s scooter sales drop. A few months into 2021, Austin said he was feeling hopeful for things to get better.

Now, he said business is going extremely well. Compared to last year, he said there was an increase in sales.

“Last year, nobody really needed a scooter,” Austin said. “There just wasn’t a lot of kids going to class; everything was still via Zoom.”

Local scooter dealerships around Gainesville are experiencing the impact of returning UF and Santa Fe students after the past year and a half of COVID. While the return of students has resulted in increased sales and positive impacts, there have also been new challenges.

Austin said his business is very dependent on college students. He started preparing for the school season by ordering scooters at the end of March, and the scooters arrived at the end of July and the beginning of August. Most scooters are imported products and usually come from China, Taiwan or Italy, Austin said.

In 2020, motorized scooters and motorcycles ranked No. 6 on the US Top 10 Imports. However, global changes brought on by COVID have resulted in increased tariffs, gas prices and shipping costs. Coupled with shipping delays and shortages, it’s taking longer to get the scooters from manufacturers to dealerships.

“The only thing that really saved us was the fact that I placed orders pretty far in advance,” Austin said. “I didn’t have as many scooters that they normally have, but it worked out to be, really, just the perfect amount.”

“I have found that to be a challenge, simply because we just didn’t have enough mechanics,” Austin said.

Understaffing issues have burdened local businesses since the start of the pandemic. Without proper staffing, companies risk losing customers and loss of revenue, among other problems.

David Haslam, the 38-year-old owner of Campus Scooters of Gainesville, said he is satisfied with his business’s current scooter sales. During the pandemic, Haslam said sales were meager. “It felt like it set us back forever,” he said.

“I’d say we’re probably like, at least 80% back to full capacity,” Haslam said. “I could see back to 100% normal and maybe even better than normal by March.”

One issue he said he had was keeping his inventory up to the demand. As students returned to Gainesville, he said the was a shortage in his stock. He said he also noticed increases in tariffs and production costs that impacted the price of scooters.

“There was kind of a backlog in the inventory,” Haslam said. “Even though we were getting busier, some of the inventory was harder to reach.”

As gas prices continue to rise across the country, Haslam said he thinks people will want more economical transportation: scooters.

“I do think, unfortunately, costs on everything are going to go up,” Haslam said. “I don’t think it’s just our business. I think it’s everything.”

Noah D’Amico, a 20-year-old physics student at UF, rides his black and white Lance PCH 50 scooter to classes, the gym and the grocery store. He bought his scooter off of Facebook Marketplace year in 2019 for $850, but with added expenses, the total was about $1,150.

“The best, for sure, is just the accessibility and the ease of it,” D’Amico said.

During his sophomore year, which was during the height of the pandemic, D’Amico said he still used his scooter to get around Gainesville even though his classes were online.

D’Amico, originally from Tampa, noticed how dominant scooters are in Gainesville compared to his home city. He has driven in both cities, and he said he feels safer driving his scooter in Gainesville because drivers are used to sharing the road, and the roads have lower speed limits. However, he said he is aware of the potential dangers.

“You’re the most defenseless person on the road,” D’Amico said. “It’s very efficient for Gainesville campus, for gas mileage, all that stuff, but you definitely need to be extra careful.”

Michelle is a reporter for WUFT News who can be reached by calling 352-392-6397 or emailing news@wuft.org.
Previous Alachua County schools are celebrating Hispanic Heritage Month in these ways
Next Alachua County Fire Rescue has a new tool for helping people in cardiac arrest. Its name is LUCAS