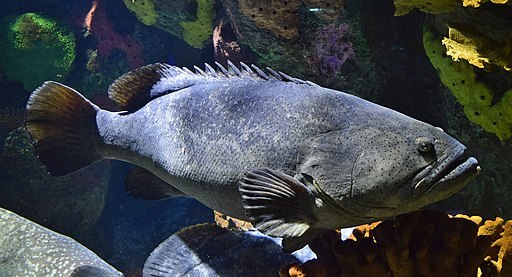 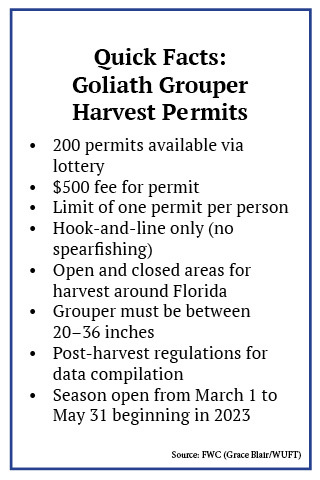 Donna Askew says being in the water with a goliath grouper feels surreal. She described the experience to the Florida Fishing and Wildlife Conservation committee members in hopes of persuading them to block a proposal that would allow goliath grouper to be harvested in Florida waters, but to no avail.

The FWC voted in favor of the draft proposal during its meeting on Wednesday that will reverse the 30-year-old moratorium on goliath groupers.

The meeting took place Wednesday and Thursday at Renaissance World Golf Village Resort in St. Augustine and was open to the public.

Goliath groupers, which are predominately found off the southeastern coast of the United States, can reach up to 8 feet in length and can weigh up to 800 pounds. The ban on catching goliath grouper was instated in 1990, when the population reached threateningly low numbers due to overfishing and habitat destruction. For the past three decades, the species had been protected by the state of Florida until Wednesday’s vote reversed the conservation effort.

“Some of the diving videos out there are just amazing, but there’s nothing like being there with them,” Askew said. “We want to protect that.”

Askew, a training director at Scuba Works in Jupiter, Florida, was one of many members of the Florida coastal communities who attended the FWC’s October meeting to share her thoughts on the newly drafted proposal. While some are in favor of lifting the ban, others like Askew are worried about the effects it may bring. A “Save the Goliath Grouper” petition was created in favor of preserving the strict regulations, and had more than 65,000 signatures as of Thursday morning.

Jessica McCawley, director of the FWC division of marine fisheries management, gave a presentation to the commissioners outlining a proposal for a “limited, highly regulated harvest of goliath grouper” in Florida. In her presentation, McCawley described some specific details about the how the new rules would be implemented to avoid another population decline.

Starting in 2023, Florida would issue permit tags via lottery system to 200 individuals with a limit of one permit per person. Each permit would be good for one goliath grouper from March 1 to May 31. The fish must be between 20 and 36 inches and can only be caught using hook-and-line tackle.

McCawley also addressed some concerns during the presentation. She said the recent changes are only being considered in light of research indicating a rising population and also pointed out the ecological consequences of indefinitely protecting an apex predator like the goliath grouper.

“The harvest must be limited in order to prevent overfishing and maintain progress towards rebuilding, but it appears their population is increasing” McCawley said.

However, some members of Florida’s fishing and diving community voiced concerns over the apparent population increase. Due to the habitats and habitual patterns of goliath grouper, accuracy in population research can vary, and some Florida divers feel that the increases seen on paper do not match what has been seen in the water.

Shana Phelan, owner and operator of Pura Vida Divers on Singer Island, Florida, said she was concerned that the population is still not high enough to justify lifting the ban.

“We would love nothing more than to see goliath grouper on a moratorium in perpetuity, forever,” Phelan said. “Where we dive, it’s been brutal trying to find where they’re at–they’re not there.”

Phelan said these grouper populations draw countless tourists to dive in Florida and must be protected so that people throughout Florida can continue to experience their presence in the water.

During her presentation, McCawley said that these public opinions would be acknowledged during the amendment process.

Meanwhile, other stakeholders in the Florida fishing community see the value in offering goliath grouper permits as long as the population will be responsibly maintained. Brett Selph, a fishing guide for his charter boat company Up The Limit based out of Horseshoe Beach, Florida, said he thinks that offering a limited harvesting opportunity would be beneficial for fishermen and ecosystems, as long as research shows the population is stable.

“Those fish, just due to their sheer size, take over a reef area when they get overpopulated and affect all the other fish living there,” Selph said. “It also takes a little weight off the other species being fished out.”

Selph also added that he has seen more goliath grouper in the past few years than in prior years when he dives.

Angela Collins, a doctor of integrative biology for UF Institute of Food and Agricultural Sciences, said the decisions voted upon in Wednesday’s meeting are not final but the proposed harvest will not be detrimental if the populations continue to be closely monitored.

“Goliath groupers are a really important part of the Florida reef,” Collins said. “But I think the number that the FWC chose as the limit for harvesting is pretty conservative.”

Collins, a former FWC marine biologist who has done numerous research projects on goliath grouper ecology, also said goliath grouper are very sensitive to environmental fluctuations, so there is always a need to closely monitor their population regardless of the moratorium’s status.

Brian Kiel, a lifelong Florida angler and retired part-time FWC marine samples scientist, said he sees both sides but feels the moratorium has been lifted prematurely.

“The data out there that looks at goliath grouper populations and is researched by specialists in the field just seems to point to it being too early to open up permits,” said Kiel. “While I do dive and I do see them, I personally think we should be cautious moving forward.”

Kiel said he can appreciate the benefits that creating a goliath grouper season holds for anglers, but he also values their unique role in the Florida ecosystem.

“It’s a native Florida species that we don’t want to waste,” said Kiel.

The meeting was adjourned for break following a unanimous vote by the commissioners in favor of passing the draft proposal, with the intention to make amendments before the final vote. The changes will be voted on in March 2022 by the commissioners before being instated for the 2023 season.

Grace is a reporter for WUFT News who can be reached by calling 352-392-6397 or emailing news@wuft.org.
Previous Gainesville attorney filed emergency petition challenging mask mandates, Alachua County Public Schools must respond by Friday
Next The Point, Oct. 8, 2021: Florida Department of Education pursues more penalties against Alachua County over masks