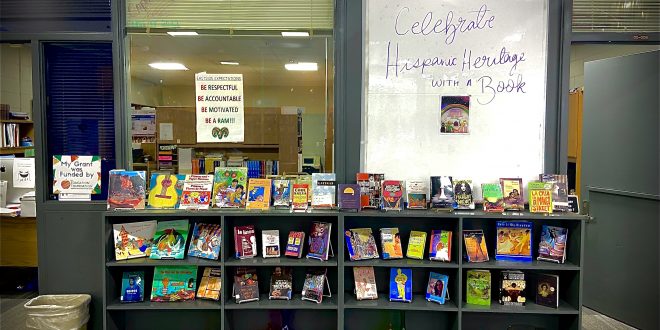 Teresa Arias, an aspiring mathematician, sat in her classroom reading a passage on Cesar Chavez, an American civil rights activist, with a group of classmates.

Answering about 12 questions on the passage, the 9-year-old Meadowbrook Elementary School fourth-grader learned about Hispanic figures in celebration of Hispanic Heritage Month, which started Sept. 15 and ends Oct.15.

Under a Florida statute, schools are required to teach Hispanic contributions, and Hispanic Heritage Month is one of the ways those contributions are highlighted, said Jon Rehm, Alachua County Public School’s social studies curriculum specialist.

For Arias, who is Puerto Rican, the inclusion of Hispanic historical figures was an important step for her classmates to learn more about Hispanic contributions.

“I feel grateful that they’re actually learning about where I’m from,” Arias said. “But I also know that I am already included.”

Overall, the district doesn’t require that schools teach the same material, but it expects teachers to find ways to incorporate it into their lessons to meet state requirements.

“We do have a commitment to diversity and sort of the understanding of diversity,” Rehm said.

Emily Brandel, a Kanapaha Middle School eighth-grade science teacher, planned to teach a new Hispanic scientist to her students every day from September 15 to October 15, she said.

For five minutes each class, Brandel projects a slideshow and talks about Hispanic figures such as pediatrician Helen Rodriguez Trias and engineer Abel Sanchez.

The information, she said, gave Spanish-speaking students a chance to see scientists who spoke their language and looked like them.

“When students see themselves in the classroom,” Brandel said. “They are going to be way more engaged. They’re going to buy into what you’re doing.”

Students in Brandel’s class were assigned to create documents and a slideshow featuring the achievements and backgrounds of the Hispanic scientists.

On a hot September day, students at Eastside High School were greeted with Celia Cruz music playing softly as they entered the school media center. Media specialist Marianne McKey displayed a Spanish translation of Stephanie Meyer’s “Twilight” along with about 30 Hispanic books including Julia Alverez’s “How The Garcia Girls Lost Their Accents.”

Students responded to the music by sharing their own heritage with McKey and recommending more artists to feature.

“The whole idea about these sorts of conversations is that hopefully you validate someone who had this experience or this heritage,” McKey said.

Lizzie Rodriguez-Rios, a Gainesville High School Spanish teacher, has used the month to incorporate virtual trips to Spanish-speaking countries for her students. In addition, students were assigned to research one of 22 countries and present on the country to classmates.

“I want them to be able to recognize the differences because we have Argentinians, and we have Columbian, and we have Mexican,” she said. “And, you know, from Guatemala, Panama all that, and we’re all different, but we’re united by one language.”

As a member of the school’s parent teacher association, he has helped organize events in the past to feature diversity of cultures.

Mendoza-Garcia said he thinks representation is important because it allows his daughter Isabella to see other Hispanic individuals working and achieving their goals – she’s learned about Hispanic astronauts and seen Hispanic teachers in the classroom.

“What I do is try to bring representation from Latinos as well and having also the possibility for her to see someone who is like her,” he said. “We believe that that’s important.”

Diane is a reporter for WUFT News who can be reached by calling 352-392-6397 or emailing news@wuft.org.
Previous Nonstop flights from Gainesville to Miami have returned
Next UF students’ return this fall means Gainesville scooter sales are on the rebound