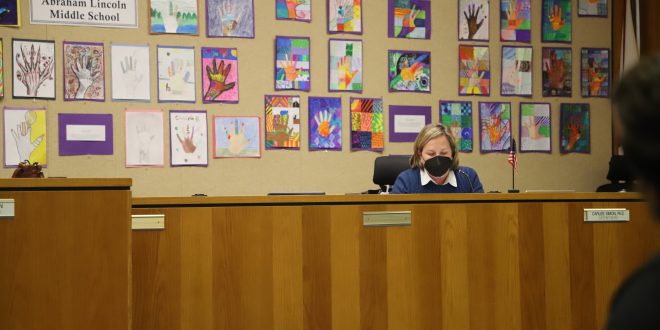 Despite some opposition from the public, Alachua County Public Schools will continue to implement a mask mandate for another four weeks.

This follows calls for Superintendent Dr. Carlee Simon to resign after her clash with Gov. Ron DeSantis over mandating masks in public schools. On Sept. 23, the federal Department of Education repaid Alachua County for pay cuts that the state handed down because of the mandate.

A panel of medical experts from UF Shands Hospital spoke Tuesday on Simon’s behalf. All five of the experts said the county school board should move to extend the mandate until children under 12 can be fully vaccinated.

Dr. Desmond Schatz, the interim physician-in-chief at UF Health Shands Children’s Hospital, said the mandate is a matter of right and wrong.

“We need to put moral considerations ahead of political ones until the danger begins to recede,” Schatz said.

Dr. Kathleen Ryan, another pediatric doctor at UF Shands, said she agrees the school board has thus far made the right decision regarding masking.

“I remain very impressed with our county leadership for standing up for what is right,” Ryan said.

Ryan also said she is concerned in the rise of children she has seen with harmful conditions following contracting even mild cases of COVID-19.

Following comment from medical experts, members of the public with varying perspectives addressed the school board about their concerns regarding masking.

Linda Jones, the vice mayor of High Springs, does not have children in the public school system. Jones said both of her sons attended public school for their education.

Jones said she does not have confidence in the superintendent.

“We have never seen such a divisive superintendent,” Jones said.

Jones also said she would have liked the school board to vote down the mandate extension.

Rockwell said she also does not understand why others say the mask mandate would not be legal.

“The federal government is already supporting our district in our decision to mask,” Rockwell said.

Rockwell is currently running for Alachua County School Board District 3. Rockwell has her PhD in special education from the University of Florida.

Following Rockwell’s comments, Ryan Green, a father to two sons at High Springs Community School, said neither of his children wears a mask to school.

As Green pulls down his mask to speak louder, Rockwell shouted at him.

“Please keep your mask on,” Rockwell said. “I have a high-risk child at home.”

Another opponent of the extension of the mask mandate was Dusty Bailey, a 4th-grade teacher at Melrose Park Elementary School. After listening to the medical experts, Bailey said he is worried there will be a vaccine mandate following the mask mandate.

“They sounded like they were ready to recommend mandated vaccines for our students,” Bailey said.

With his mask pulled down under his nose, Bailey said most of the crowd attending the school board meeting was not wearing their mask correctly. Several members of the crowd, including Rockwell, interjected to tell him to pull his mask over his nose.

After being asked by the chair of the school board to pull his mask up, Bailey removed his mask entirely. Three sheriff’s deputies then escorted him out of the meeting.

The board also heard public comment via phone call. One caller was Austin Barcia, a 4th-grader at M.K. Rawlings Elementary School. Barcia said he is in support of extending the mandate.

“Masks should be used for an extended amount of time and they protect everybody,” Barcia said. “I like to keep everyone safe, including my high-risk sister.”

Katie Martin, a 5th-grade teacher, also called in to the meeting. Martin said she is worried about her students who are all too young to be vaccinated.

“They do not have a choice of who they sit by for a vast majority of the school day,” Martin said. “If masks become optional, students will have no idea if students who sit next to, in front of or behind them will be wearing masks on any given school day.”

Anticipating the backlash, Schatz said he and doctors around the world are following science.

“We don’t have all of the answers,” Schatz said. “We are looking at the scientific data and trying to give the best possible advice.”

The next school board meeting will be held Oct. 19 at 6 p.m.

Kendall Brandt is a reporter for WUFT News who can be reached by calling 352-392-6397 or emailing news@wuft.org.
Previous Her TikTok broadcasts from inside a Florida prison are exposing conditions to millions.
Next The Point, Oct. 6, 2021: Woman takes to TikTok to tell her side of what it’s like in Lowell Correctional Institution