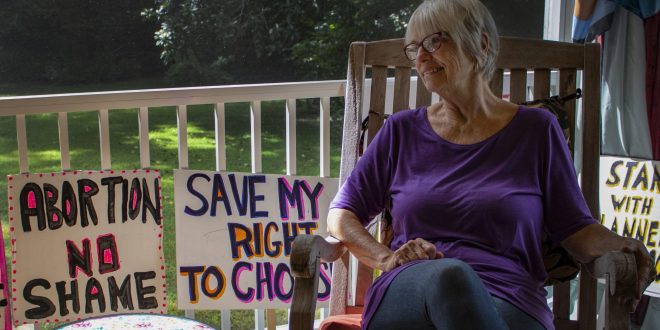 Pamela Smith sits in a rocking chair on the porch outside her home in Gainesville, surrounded by chirping birds and bold-lettered protest signs that read “1973 – Protect Roe V. Wade,” “Save my Right to Choose” and “No Uterus, No Opinion.”

Over 500 marches nationwide took place Saturday in the wake of recent anti-abortion legislation in Mississippi and Texas. In Gainesville, hundreds of protesters took to the streets while Florida looks to soon face a similar anti-abortion law.

Smith was an activist for Roe V. Wade in the 1970s, and she has continued advocating for others since. Today, she’s a retiree who belongs to a committee that was created specifically to help organize the local march and rally in Cora P. Roberson Park.

“I think it’s dangerous… to have any religion dictating our laws,” Smith said. “We want to bring attention to [the recent anti-abortion legislature] and say ‘no, you are not doing this in Florida.’”

Volunteer Alexi Hernandez said he’s marching for peoples’ right to choose for themselves. “I don’t think that men or anybody in general should decide what women have to do with their own bodies,” Hernandez said.

Several anti-abortion protests also took place across the country over the weekend, including a counterprotest in Ocala. One woman came to counterprotest at the rally in Gainesville, but she left quickly when she realized she was alone at the event.

“The only reason that abortion laws get filed is to make sure they maintain mechanisms of control for the same kinds of communities that are continuously targeted in all of the awful legislation that we see filed,” she said. “I think it’s important to show up today, build solidarity within the community, build support within the community and show up for each other.”

D’Addario said many activists want to focus on a shift in language to include marginalized groups such as people outside the gender binary. She said there are systems in place to deter transgender and nonbinary people from accessing reproductive care such as abortions and birth control.

Chanae Jackson, one of the many speakers at the rally, said birth control was a life-saving solution for her own daughter’s health issues.

“When we keep saying our right to abortion and our right to birth control, people don’t understand that’s bigger than somebody needing birth control to decide if they want to have sex or not,” she said. “It [can be] the difference of life or death.”

“This is not just about abortion,” she said. “Women of color and other marginalized women also have difficulty accessing contraception, comprehensive sex education, STD prevention, alternative birth options, adequate prenatal and pregnancy care, domestic violence assistance, adequate wages to support our families, safe homes and so much more. This is a rallying cry for education, for awareness and action on extended reproductive justice for all women.”

Many attendees said they felt the need to march due to recent legislation, and they’re looking ahead to facing Florida’s recently proposed abortion ban. Demonstrator Izzy Myers said she wanted to show her support for the community and protest the Florida bill.

“The right to choose when it comes to abortion is really important,” Myers said. “And it’s under threat right now in Florida with this new bill. It’s scary.”

Myers, who is a student at UF, said the vast age variety of participants was encouraging.

“We had little kids that were here with their parents,” she said, “we had so many college students, obviously… But there were so many… older people from the community. It was just really nice to see everyone working together for the same goal.”

Smith and other organizers said they were happy with the turnout at Saturday’s march.

“It was phenomenal,” she said. “When the [second round of] marchers started coming in, I was like ‘Oh my god, this is incredible.… I think people have a lot of power. I think we have more power than we believe we do.”

Sara is a reporter for WUFT News who can be reached by calling 352-392-6397 or emailing news@wuft.org.
Previous The Point, Oct. 5, 2021: Florida’s First Lady has been diagnosed with breast cancer
Next School bus drivers were always in demand. COVID-19 further strained the staff, parents and students