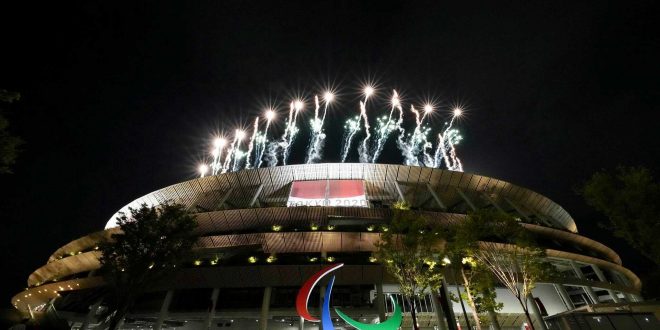 The Paralympic logo is illuminated by the flash of fireworks from the Tokyo 2020 Olympic Stadium. (Photo courtesy of Marshall Zackery)

Tony McCall’s heel rested against the starting block like it had nearly 20 years before. The retired athlete’s fingers pressed against the blue track, and he bent his knee — it was muscle memory.

Sprinting across the thick white stripe, McCall said he realized he had made it: He crossed the finish line in the 2016 Rio de Janeiro Olympic Stadium. Although he traveled to Rio as a coach and not a competitor, the moment five years ago fulfilled a lifelong dream in a different uniform than expected.

It also helped him discover his calling: training and advocating for athletes with disabilities.

“I thought that I would get to that start line as an athlete, but God had other plans,” McCall said. “Twenty long years ago, I didn’t know anything about Paralympics; I didn’t know this would be a part of my legacy, my future, who I am, part of my DNA.”

Tony McCall, the owner of Tony McCall Speed and Fitness, led two Marion County track and field athletes to the delayed 2020 Tokyo Paralympic Games this August. It was his second Paralympic appearance as an assistant coach. After almost a month in Japan, the trio returned to Marion County.

Woods, 40, finished fifth in the 200-meter sprint and tenth in the long jump in his second Paralympics appearance. Games newcomer Marshall Zackery, also of Marion County, finished sixth in the 200 meter and seventh in the 100 meter.

They did not earn medals, but McCall said he does not measure success by placement.

“Regas came out and ran a second faster than he had run in probably two years, so, for us, that was a win,” he said. ‘Marshall had his first Paralympic experience — there were nerves, there were jitters — but he found a way to fight through and get across the finish line.”

McCall has trained six athletes who have competed in the Paralympics or the World Championships.

“Part of my goal and my mission is to try to make Marion County and the surrounding areas the Mecca of Paralympic track and field sports,” he said.

Now 47, McCall made his track and field competition debut at Forest High School in Ocala. By his junior year, he was a state and national champion.

From there, his success became international. At 17, he placed third as a member of the U.S. World Junior team in Seoul, South Korea.

“My motivation to be the best wasn’t so much about winning,” he said. “It was more just having my name called out and having Ocala, Florida, mentioned 12,000 miles away.”

In college, McCall ran for the University of North Carolina, becoming an 11-time All-American and a two time NCAA champion. However, he failed to qualify for the 1996 and 2000 Olympic Games. McCall then took a job in human resources as a senior trainer.

“I truly felt like sports was over for me,” he said.

Despite his disappointment, he said he discovered a new talent. Curtis Frye, McCall’s former coach at UNC, asked McCall to train University of South Carolina football players for the NFL. From 1998 to 2000, McCall trained and mentored Frye’s athletes.

In 2009, McCall returned to Ocala to assist his ailing aunt. He began offering his coaching skills as a personal trainer and took photos in his free time.

In 2013, while snapping photos of a 1975 Buick LeSabre convertible at a vintage car show, McCall struck up a conversation with its owner, who coincidentally was a track athlete.

McCall said the man rolled up his pants, revealing two prosthetics, and he spread his arms as if to say, “Look at me.” Doctors had amputated the man’s legs when he was just 2 years old.

“I couldn’t put two and two together,” McCall said. “How can you say that you are a track athlete, but you have prosthetics?”

Curious and searching for workout partners, McCall invited the stranger with the shiny car and matching shiny legs to Trinity Catholic High School where he trained clients, he said.

Regas Woods, now a two-time Paralympic sprinter and long jumper, said after the first practice with McCall, he was so tired he thought he’d “have to call 911.” But the challenge, Woods believed, was a test of his strength.

Woods said he was among the first bilateral above-the-knee amputees to run in a sanctioned race — and the first athlete with a disability McCall coached.

McCall supported Woods through a new challenge: In 2018, the International Paralympic Committee passed new sanctions that forced Woods to run with blades that shrunk him to 5 feet, 4 inches — after running at 5 feet, 10 inches the rest of his career.

“Coach always goes back to ‘control what you can control, and don’t worry about the rest,’” Woods said. “And that’s what a coach is: someone who brings out the best in a person.”

Man with a mission

McCall said one conversation with Woods has stuck with him for the eight years that he has known Woods. Woods once told him he never wore shorts during school because he feared being bullied for his prosthetics.

“I couldn’t imagine going through life like that,” he said. “Every ounce of energy that I put forward is to ensure that he never feels like that again.”  The stranger from the car show, McCall said, reinvigorated his love of track and field and established a new vocation for the retired athlete. Together, Woods and McCall began to assemble a team.

In 2021, 28-year-old Marshall Zackery joined Woods and McCall on the Paralympic track. The pair discovered Zackery while training in an Ocala gym in 2017.

Zackery appeared strong, but he walked with a slight limp, McCall said. McCall suggested to Woods the man may have cerebral palsy but was hesitant to approach him.

“Coach, I don’t got no legs,” Woods told the stranger, crossing the weight room to introduce himself.

Zackery, who is visually impaired and has cerebral-palsy-like conditions from a childhood traumatic brain injury, said he thought his Paralympics’ window had closed. Zackery had put away his spikes after attending the Florida School for the Deaf and Blind and pursued his associate degree from the College of Central Florida.

But Zackery went to practice with them that afternoon.

“It means a lot that even though it might not happen as fast as you wanted someone could see your talent and your worth and bring it out of you,” Zackery said.

That year, McCall trained him for the Desert Challenge Games in Arizona. Although Zackery and his mother were hesitant, he decided to take a chance.

“You don’t always get the same opportunity twice,” Zackery said. “This moment might not come to you, so you have to take advantage of every opportunity that you possibly can.”

Zackery did not originally qualify for the Paralympics. But on Aug. 4, he was notified of an open spot on the team, he said. After returning from Tokyo, he started a training and motivational speaking service, Marshall Matters LLC.

McCall said Paralympic success is just the beginning of his mission to support the next generation of athletes with disabilities. In 2020, he started a nonprofit called the Fast Project to introduce young people to adaptive sports.

When he watches his athletes perform, he said he sees their “disability disappear.” When Zackery runs, McCall can barely see his limp, and he often forgets that long-time friend Woods is a double amputee.

Athletes from across the country have contacted him, he said, but he does not wait for them to come to him. Instead, he seeks them out, knowing the moment they put their feet, blades or wheels on the starting line could change their lives forever.

Avery is a reporter for WUFT News who can be reached by calling 352-392-6397 or emailing news@wuft.org.
Previous First Fridays Are Back In Ocala – You Can Peruse Art And Hear Live Music
Next Columbia High School Ups Security For Football Games Following Bump In Firearm Incidents

Cat cafés are growing in popularity across Florida, with more than 10 locations and a bump in adoption rates statewide.