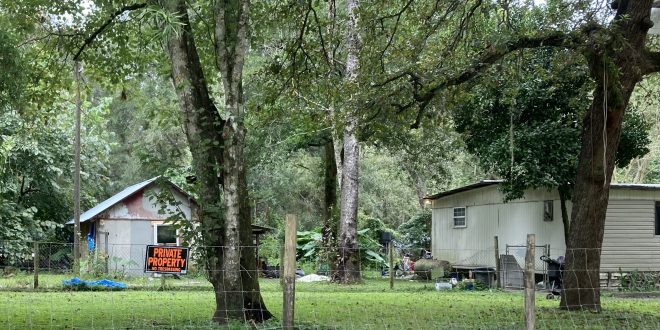 Willie Jay pointed with a cigarette between his fingers down the dirt road from his mobile home in Gilchrist County.

“That’s the flood zone down there,” said Jay, a sawmill worker who lives with his wife and daughter, referring to a mass of trees where rainwater lay stagnant beside a cluster of trailers.

His neighborhood in Trenton, a town with a population of about 2,000 people, is not the only one with this looming threat.

An NPR investigation found that the U.S. Department of Housing and Urban Development (HUD) disproportionately sells homes in flood zones to those in households with low incomes.

HUD is working with the Federal Emergency Management Agency to address these issues, Michael Burns, a spokesman for the department wrote to WUFT in an email.

Burns said HUD has a “dual obligation” not only to inform homebuyers purchasing property from it, but also to protect property values of neighborhoods containing vacant homes.

“The administration is committed to improving the resiliency of communities located in flood zones as part of our priority to address the impacts of climate change,” Burns wrote.

Those who deal with HUD often recommend homeowners do their own research before buying.

“They don’t do any real due diligence,” Moser said.

Too many prospective buyers opt out of having inspections done in advance – instead buying them “as is” – because they want to spend as little as possible and get a house at an affordable price, she said.

“You get these buyers who go, ‘Yeah, no, it’s OK, it’s OK,’” Moser said, “because they know (it’s) inexpensive. And then when problems happen, then all of a sudden it’s not OK.”

Trish Barker, 64, bought her property in Weirsdale in April 2020. She left the Florida Keys to be closer to her 45-year-old daughter.

“I know we are in a flood zone,” Barker said, “but you wouldn’t even know it, really.”

In the year she has lived on the 5-acre lot, she hasn’t had issues with flooding. Even with a pond in her backyard, the water doesn’t come near her home.

“It’s pretty good back here,” Barker said. “We haven’t had any real problems.”

Even as intense floodwater from recent rains have damaged parks in Alachua County, low risk zones haven’t been hit as hard. But as climate change causes more flooding in the future, even Barker’s property, which is classified as having minimal flood risk, could face trouble.

Mark Clark, a wetland ecology professor at the University of Florida, said the frequency of 100-year floods is increasing alongside the area of flood zones.

“We’re willing, to some extent, to take the risk of living in those areas,” Clark said. “Now it’s occurring more frequently, and so that risk is now becoming unacceptable.”

Clark said as the atmosphere gets warmer, it can hold more moisture, causing increased rainfall.

“Just look at the frequencies of flood events and the intensities, and they have increased,” he said. “It’s not a theory anymore – it’s an actual reality.”

Consequently, fewer people should take the risk of floodwater sweeping through their homes.

The NPR investigation found that neighborhoods in which these HUD homes were sold have a lower median household income than surrounding areas where they were not.

HUD should be moving people out of floodplains, as the issue will only get worse, Clark said.

Prices of South Florida homes outside flood zones are rising due to increasing flood insurance costs and concern about climate change. This is driving up home prices in once affordable areas.

But Clark said the federal government is sending mixed messages through its sales practices.

A 1977 executive order mandates avoiding impacts to floodplains including acquisition, construction, demolition and financing. However, the disproportionate amount of sales in flood zones shows HUD practices don’t match these guidelines.

Bernie and Sandy Durell bought their house in Weirsdale from HUD through a real estate three years ago. Their property is on 10 acres of land, but only half of that space can be built on, Bernie Durell, 65, said.

Durell hired an inspector, so he said he knew what he was getting. About 5 years ago, the pond that straddles their property and that of a neighbor’s was dry, he said. Now, it’s 5 feet deep.

During periods of heavy rain, the water’s edge of the pond will creep up another 5 feet.

“When we first moved here in 2019, it rained every day, hard,” Durell said, “and the lake was the highest it’s probably ever been.”

Luckily, he said, his property is one of the highest above sea level in the neighborhood.

Durell said he and his neighborhood homeowners’ association have contacted state environmental regulators many times looking for guidance in dealing with rainwater.

They haven’t heard back.

Jack is a reporter for WUFT News who can be reached by calling 352-392-6397 or emailing news@wuft.org.
Previous The Point, Sept. 27, 2021: Why The Problem Of Heirs’ Property Caused Black Families To Lose 90% Of Their Land
Next Cade Museum’s New Gaming Exhibit Connects Players