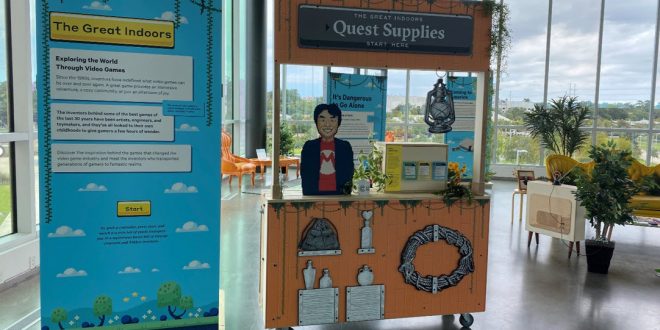 The merchant stand is where the heroes, or Cade visitors, begin their journey.

The Cade Museum of Creativity and Innovation is summoning Gainesville residents to embark on a quest – a quest to unlock knowledge about video game development, pixel by pixel.

The museum on Thursday debuted its new exhibit – appropriately titled “The Great Indoors” — which invites guests to immerse themselves in the world of digital gaming and its role in modern society. Namely, the exhibit focuses on the evolving empire of the video game company Nintendo, with interactive components that educate guests about its history, development strategies and overall effect on leisure culture.

In the world’s time of need, an unlikely hero brought unity and comfort to households. Video games kept people connected when the spread of COVID-19 pushed them into a strictly online space. The museum’s creative development team came up with the idea to spotlight wildly popular games such as “The Legend of Zelda,” “Pokémon,” “Animal Crossing” and “Katamari Damacy” in the exhibit.

“The inspiration behind ‘The Great Indoors’ really came about thinking about the pandemic and the way that people really connected by playing games like ‘Animal Crossing,’” said Jesse Hunter, the exhibits and collection manager at the Cade Museum. “I really kind of was fascinated by this idea of the way we think about video games – we think of them as these really isolating things, playing alone in your room. But the reality is that a lot of people who were really lonely and needed connection found it through video games.”

According to Hunter and the research he did, Japan experienced a similar time period of “economic uncertainty” in the 1990s and early 2000s called the “Lost Decade.” The result was a pursuit of “healing” that led to the foundation of cat cafes and video games that cultivated feelings of nostalgia and childhood. The exhibit aims to provide guests with the Japanese history that led to the creation of these video games.

“The Great Indoors” is an homage to video games and their contributions to society. The panels include biographies of game designers – such as Shigeru Miyamoto, the creator of popular games like “The Legend of Zelda” and “Mario Bros.” – along with timelines of video game and console advancements.

Embellished with an array of challenges and activities, visitors can simultaneously have fun while learning about the key components of a digital game. It is one of two new exhibits from the Cade Museum that exemplify its new theme “Toys and Games.” The theme showcases the advancement of hands-on gaming inventions such as Play-Doh and Nintendo.

“‘The Great Indoors’ is about video gaming and participants can play games inspired by these video games and complete challenges, answering questions about the inventors,” said Kathryn Rohlwing, the senior marketing manager at the museum. “So, that’s really interactive.”

It took about a year to put together the exhibit, according to Rohlwing. Over the course of 12 months, the team focused on bringing the concept to life, creating titles, and writing and printing exhibit panels.

The exhibit’s kiosks include mini games that mimic what full-length video games entail. Elements such as problem-solving puzzles and collecting items are intentionally utilized to emphasize how digital gaming uses the same formula to create an immersive experience. Hunter’s personal favorite is “Loss for Words.”

“It’s just these two little characters – a raccoon and an armadillo – and they have word bubbles coming out from above their faces that have partial dialogue,” he said. “And you can take different little word magnets and kind of fill in what they’re saying, and the point of it is that, the way communication games work, like ‘Animal Crossing,’ is that they give you different maps to go off of when you’re interacting with characters, but you have to think about what comes next in the conversation.”

Cade volunteer Yvette Kelley has enjoyed participating in the exhibit.

“I saw it for the first time yesterday and I was so excited by it, that I signed up today so that I could get around and get to see it all,” Kelley said, on the exhibit’s opening day. “I liked the level of interaction. I did the code thing, where we had to go through a series of questions and kind of discover and explore and figure out from the clues that were there.”

Kelley’s reaction is exactly the type of response that Rohlwing had hoped for.

“Our goal with any of our exhibits is that all age groups can enjoy it,” she said.

Notably, the exhibit also features an 8-bit style arcade game called Cade Quest developed by the Cade Museum staff. According to Hunter, it is an adventure style game, similar to “The Legend of Zelda,” that signifies the end of both the visitor’s journey and the exhibit. Playing as the default avatar, Dr. Robert Cade, the player strolls through Depot Park to collect items that are used to build an arcade cabinet.

Though the exhibit strives to communicate many things, there’s one takeaway that Kelley thinks visitors will unanimously agree upon.

“Learning is fun,” she said.

Alexis is a reporter for WUFT News who can be reached by calling 352-392-6397 or emailing news@wuft.org.
Previous Florida Ranks Second In Government-Sold Homes In Flood Zones
Next Newberry Parade Celebrates Veterans Who Served In Afghanistan

The Lede ✓|| Season IV Episode I: Falling for Unique Fashion

“Murder for Two” is playing at The Hippodrome as part of its mainstage season until Oct. 3.