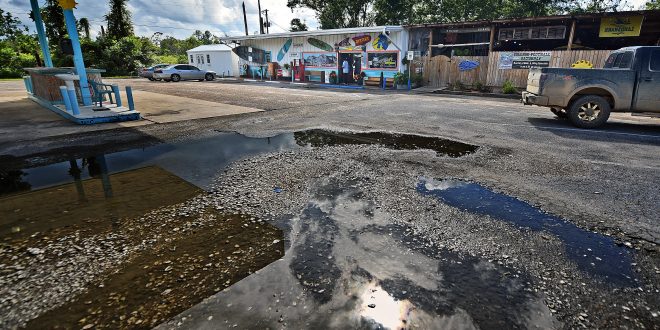 The Landshark Oyster Bar & Grill in Cottondale, Florida, is seen in this photograph taken Sept. 21, 2021. The restaurant is at the center of a $1 million federal lawsuit by a former bartender who said she was sexually harassed and quit after five days on the job. Photo by Jay Hare/Fresh Take Florida.

A Florida bartender who sued for $1 million over allegations that her supervisor groped her in a beer cooler before she quit after five days on the job is set to collect $70,252 in a federal lawsuit against owners of a Panhandle restaurant.

In a twist, the owners themselves are feuding in state court over the restaurant’s future and trading allegations that each stole money from business. The owners abandoned any legal defense in the federal lawsuit after January, ignoring the judge’s deadlines and threats to issue a default judgment.

U.S. District Judge Allen C. Winsor was waiting until after Thursday to see whether anyone in the case objected to the proposed judgment against the small roadside restaurant, the Landshark Seafood & Oyster Bar in Cottondale, Florida, about 75 miles west of Tallahassee.

The bartender, Krista Sublett, 38, of nearby Chipley, said that in February 2020 – her third day on the job – her supervisor Shane A. Britt, 60, of Panama City groped her inside a cooler, causing her to drop a case of beer, and rubbed his groin against her from behind. She said he also commented on the size of her breasts and butt.

Sublett, who said she had 17 years of experience as a bartender, had been hired for $8.05 per hour plus tips, which amounted to $1,500 working five nights, according to court records.

The circumstances of the case raised important legal issues in Florida, where conservative Gov. Ron DeSantis and the Republican-dominated Legislature have proposed or already limited payments to victims of the pandemic, asbestos, medical malpractice and more.

In an interview, Britt denied sexually harassing Sublett. He said he stayed in the kitchen all day and rarely interacted with the bar. He also accused Sublett of arguing with her coworkers. He said he did not participate in the restaurant’s courtroom defense because he was not personally named as a defendant in Sublett’s lawsuit, even though he subsequently took over partial ownership of the business.

The restaurant remains open. Its liquor license was valid through the end of this month, according to Florida licensing records.

Sublett initially sought $1 million in compensatory and punitive damages, back pay and benefits, future pay and benefits, prejudgment interest and attorney’s fees. The $70,252 proposed so far in the case included back pay covering the 10 weeks she said she was unable to find a job after she quit at the Landshark restaurant. That period included weeks when DeSantis ordered all restaurants and bars temporarily closed in Florida during the pandemic.

Sublett and her lawyers, Matthew Birk of Gainesville and Jay Romano of Boca Raton, declined to discuss her case ahead of Thursday’s deadline in federal court in Gainesville.

Text messages in the federal case showed Sublett discussing Britt’s alleged behavior with restaurant co-owner Glinda Lue Hathorn, 67, of Panama City Beach. Sublett described Britt “freggin groping me,” and added, “I know I know ‘he was just messing around.'” Sublett also added, “I didn’t ask for that to happen.”

Sublett complained that after the incident, Britt moved her from bartender to waitress and reduced her shifts from five days to three, court records showed. Her lawsuit called it a hostile working environment in which she was humiliated and degraded. She said Hathorn brushed off her complaints, saying, “I’m sure he was just playing around with you. Don’t get so defensive.”

Hathorn did not return phone messages or email inquiries about the case for more than one month. In her own texts, she said Sublett was moved from bar duties because waiting tables was more lucrative – the pandemic at the time was sweeping through Florida, and DeSantis weeks later ordered all bars and restaurants temporarily closed – and said Sublett ignored her bar duties while trying to wait tables simultaneously.

“The girls (were) complaining they’re all waiting on beer’s, had to get them their self,” Hathorn wrote to Sublett. “You wasn’t there, you were at table. I know it’s true because I took beers to table for them.” She added: “I let you work table to make good money.”

The federal case overlaps with a related civil lawsuit that Hathorn filed against Britt in Jackson County Circuit Court in June 2020, accusing him of stealing thousands of dollars in cash and liquor from the restaurant. That case is still winding through the courts there.

Hathorn asked the judge to dissolve the company and award her money. She identified Britt as the stepson of restaurant co-owner Flem Houston of Bonifay, who died in January at 88, and said Britt took over Houston’s ownership stake.

Britt denied misusing any restaurant’s money and, in turn, accused Hathorn in court records of “unclean hands.” He said she took business funds without permission – including $46,000 from a federal paycheck protection loan intended to help small businesses during the pandemic – and opened a “secret” bank account to divert company funds.

The restaurant’s lawyer, John W. Roberts of Miramar Beach, withdrew from the federal case in December 2020, six months after Sublett had sued. No other lawyer took Roberts’ place in the federal case – and the U.S. judge threatened to rule by default against the restaurant, which he eventually did in May.

The judge declined to award Sublett the full $1 million she had sought, asking a magistrate judge, Gary R. Jones, to study the case and offer recommendations.

A March survey by a labor group representing restaurant workers, One Fair Wage of Cambridge, Massachusetts, found that 70% of female restaurant workers reported they had been sexually harassed at least once during their time in the industry.

A spokeswoman for the group, Yamila Ruiz, said employees like Sublett who rely on tips are subject to higher rates of sexual misconduct.

The federal lawsuit was unfolding in U.S. district court in Gainesville, more than 200 miles from the restaurant. Jones, the magistrate, said the case should have been filed in federal court in Pensacola, but officials decided it would have wasted the court’s time to transfer the case after the court discovered the mistake.

This story was produced by Fresh Take Florida, a news service of the University of Florida College of Journalism and Communications. The reporter can be reached at tholton@freshtakeflorida.com

Thomas is a reporter for WUFT News who can be reached by calling 352-392-6397 or emailing news@wuft.org.
Previous Alachua County Residents Can Request Legislation Or State Funding At Upcoming Meeting
Next College Students Are Facing Increased Mental Health Issues With The Return Of In-Person Classes