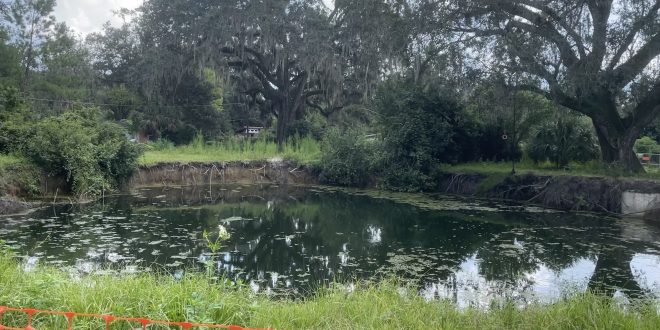 Beyond the orange netting lies the 125-foot sinkhole. Water has filled some of the hole, hiding the true depths beneath. Exposed tree roots remain along the unstable ground. (Zoey Robinson/WUFT News)

The city of Gainesville installed a temporary fence around the sinkhole and damaged properties after the collapse. Next month, it is scheduled to come down.

Once the fence is removed, Thomas Berson, a resident since 2004, worries about someone falling in the hole.

The soil surrounding the sinkhole remains vulnerable with carved out portions of underground layers. Berson said it would be easy for someone to “not realize you’re standing on nothing.”

“Someone is going to die,” Berson said.

Berson and his 7-year-old dog, Sam, no longer permanently live in his Westwood home. The duo now is always on the move, traveling among his boat in the Gulf of Mexico, friends’ homes in DeLand, Florida and his dismantled house.

“My world is in storage,” Berson said. “My house isn’t a home anymore.”

Some houses were demolished by the sinkhole. Others remained safe once it was determined what direction and speed the sinkhole could expand.

Berson is the only homeowner left who still lives directly next to the sinkhole. Other neighbors who lived near the sinkhole moved away from the residential community either because their houses were condemned, or they wanted to dissociate from the disaster.

This was a cover-collapse sinkhole, where vulnerable soil loses stability and leads to a rapid collapse, according to a presentation by Ted Goodman, a geologist with the Alachua County Environmental Protection Department.

The city of Gainesville was tracking incremental changes with the growth of the sinkhole since it opened. Regular updates were provided by the city’s website, with information on expansion, soil erosion, water levels and house demolitions. The last update the city of Gainesville posted on its website was Feb. 10. The problem is far from over though.

The fence served as a barrier between curious viewers and the sinkhole, also known as Berson’s Hole by local residents.

According to the city’s public information officer, Rossana Passaniti, the lease for the fence expires late October with no plan to extend it.

“The sinkhole is on private property,” City Manager Lee Feldman said. “We put up the fence as an accommodation to the four property owners that were affected by the sinkhole.”

Feldman said the city has informed residents that the fence will be removed soon. He also advised property owners to make their own accommodations if needed.

Even with the fencing still intact, Berson has seen onlookers jump the fence and meander around. There are no records of anyone falling in the sinkhole to date.

The property owners would be responsible if someone fell in the sinkhole and became injured or died; they say it creates stress and additional hassles for them. City leaders say otherwise.

“That is why you have insurance on your property to pay for these types of expenses,” Feldman said. “It is not the taxpayers’ responsibility to secure private property.”

Insurance can only settle payments and cannot undo bodily harm or death. Regardless, landowners are trapped into being liable if anyone fell in the hole.

Devil’s Millhopper Geological State Park, a popular hiking spot for North Central Florida residents, was also a sinkhole that formed when the limestone beneath crumbled.

Berson believes that one day the sinkhole in his backyard could be the next Devil’s Millhopper.

In response to his hopes for the future, the city holds firm that can’t happen until the land isn’t privately owned.

None of the property owners that Feldman is aware of have approached the city about giving them the property.

Many former neighbors affected by the sinkhole declined interview, citing their desire to move forward from the situation.

Zoey is a reporter for WUFT News who can be reached by calling 352-392-6397 or emailing news@wuft.org.
Previous RTS Bus Riders Are Struggling To Navigate Detours (But There’s An App For That)
Next A New Urgent Care Center Is Being Built In East Gainesville

In the wake of the Archer solar controversy, Alachua County commissioners vote to buffer future facilities

The commissioners met this week for a special meeting to discuss the county’s solar policies. The conversation quickly centered around the tree coverage and buffer of these facilities.