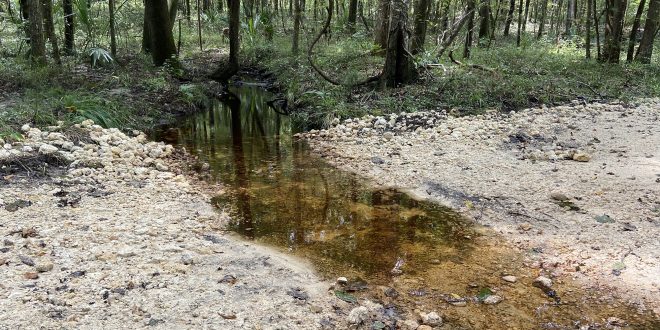 A stream of water flows across a trail at Turkey Creek Preserve Park. (Lucille Lannigan/ WUFT)

The sound of insects fills the otherwise quiet scene at Turkey Creek Preserve. Wide grassy trails make up the majority of the preserve, but others are roped off — their pathways slick with mud and filled with debris.

Cliff Gionet, a 73-year-old Gainesville resident, completed his hike through Turkey Creek despite the heat and closed paths. He’s a frequent visitor who enjoys walking and biking along the trails, and while the closures of some haven’t affected his personal recreation, he laments the constant summer rain.

After Hurricane Elsa in July, Alachua County Preserves faced flood damage including uprooted trees and debris on some trails. Portions of Barr Hammock Preserve and Turkey Creek Preserve remain closed due to hazardous conditions. Throughout the summer, heavy rains created issues for preserves and parks like San Felasco Hammock Preserve State Park. In July alone, Gainesville received 13.99 inches of rain, which is 7 inches above average, according to the 2021 National Climate Report published by the National Oceanic and Atmospheric Administration.

“I would say this is probably the worst year I can remember, and we’ve been here a long time,” Gionet said.

Ryan Kennelly, senior environmental specialist for Alachua County, said he was surprised by the flooding at Turkey Creek. Since reopening to the public in March, it has become one of the most visited preserves, Kennelly said.

The preserve, located at 6300 NW 93rd Ave., is typically one of the driest, he said. There are portions that consist of wetlands, but the vast majority are upland habitats. After more than a month of abnormally heavy rain, he said areas that are usually bone-dry were seeing water flowing across them.

Erosion issues already existed on sloped parts of the trails and staff began working with contractors to repair these roads, Kennelly said.

“Elsa hit and just sort of elevated all of the work that we needed to do beyond what we were already expecting to have to do,” he said.

Kennelly believes the flooding is from a combination of abnormal local regional weather patterns as well as the rolling topography and sinkhole features at Turkey Creek.

“You know water likes to move downhill and when it does it can sort of scour away at the trail,” he said.

One of the large sinkholes at the preserve and the trail next to it filled up with a tremendous amount of water whereas in the spring it was completely dry, Kennelly said. Because of the high water table, the sinkhole was unable to drain.

During Hurricane Irma, Turkey Creek saw similar levels of flooding, he said. Staff at Turkey Creek look at this flooding as a naturally occurring disturbance that is a part of the system in floodplain areas, but he expects policies to become more extreme if abnormal seasons of heavy rain continue.

“From my observations and observations we’ve seen at other preserves… we are seeing a greater impact with changing weather,” Kennelly said. “Exactly how that’s going to pan out in the future is probably still an unknown, but what we have been seeing is an increase in frequency of these extreme events.”

If heavy bouts of rain continue to happen in short periods of time and all at once, Kennelly said, he expects there to be more damage.

Though the rain hasn’t completely stopped frequent hikers from visiting their favorite parks and preserves.

Gainesville residents Ellen and Jeff Bowser tend to avoid visiting trails throughout Alachua County when they’re wet. While they haven’t seen many trail closures, they’ve noticed trails at preserves like Four Creeks Preserve Loop and Blues Creek, off of Millhopper Road, become unwalkable due to flooding after storms.

“We love these trails, and it would be concerning if we couldn’t go out,” Ellen said.

San Felasco Hammock Preserve Park, located in Alachua, put up warnings on trails that were inaccessible because of fallen debris or standing water after Hurricane Elsa, Jim Pollard, president of the San Felasco Citizen Support Organization, said. This non-profit organization supports and maintains the park through member and volunteer groups on a monthly basis.

“We had better than 12 inches of rain over a week period prior to the hurricane so we had a lot of standing water,” Pollard said. “It was just the icing on the cake.”

He said the trail conditions were similar to post-hurricane conditions in 2004 and 2005 when there were a lot of heavily wind-damaged areas.

“But right now, I can say that the level of standing water is greater than what we’ve seen over the past 20 years,” Pollard said.

He said climate change isn’t solely to blame for the abnormally heavy rains experienced by Alachua County this summer. He explained that climate change doesn’t mean just one thing, like increased rains but instead means significant changes in weather and unpredictable, severe weather patterns.

Pollard said he worries the most about increasing temperatures, which affects the animals and other wildlife at San Felasco State Park. After working at the park for more than 20 years, Pollard said he has noticed subtle changes that can be attributed to an increase in temperature like migratory birds and blooming plants showing up at different times than previous years.

However, he doesn’t expect future issues of limitation for bicyclists or hikers in the park. As hurricane season progresses, and with it, the chance of another storm developing, Pollard said he would expect to see more trails rendered inaccessible due to the wet ground. Trees like Laurel Oaks and Water Oaks are also at a risk of falling over when wet, which could be an obstruction to trails as well.

If these damages occur, he said it will be his volunteer crew’s job to go out and cut and remove these trees to clear up trails. The volunteers meet on the second Saturday of each month and are consistently welcoming new people to join. Pollard said volunteering is essential to  combating erosion and keeping the park at its best.

Lucille is a reporter for WUFT News who can be reached by calling 352-392-6397 or emailing news@wuft.org.
Previous The Point, Sept. 20, 2021: Alachua County Firefighters Are Dealing With Pandemic-Induced Burnout
Next Gators vs. Volunteers in Blood Drive Competition