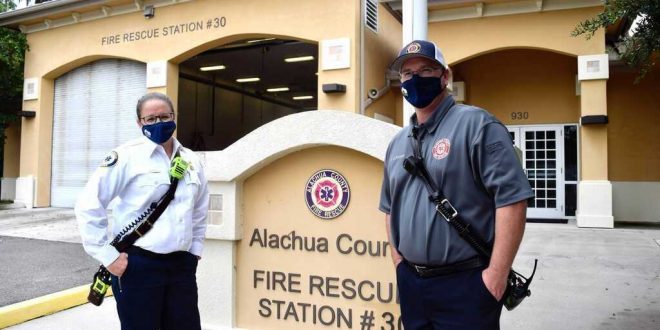 Rebecca Creech-Redding wakes up to one of two alarms.

Some nights, she springs from a vinyl recliner as a siren screeches in her ears. She straightens her glasses, dashes to her locker, pulls on rubber boots and leaps into the back of an ambulance — a vehicle Creech-Redding affectionately refers to as “she” — before departing in a flurry of red lights from Alachua County Fire Rescue Station 30.

Other mornings, she’s awoken by another alarm: her 2-year-old son, Riley. But mandatory overtime, fatigue and increased call loads have caused mornings of the first alarm to shadow the second.

Creech-Redding is one of 48 rescue lieutenants currently working for Alachua County Fire Rescue. The department is understaffed by seven of these in-demand workers — but an Aug. 24 Alachua County Commission decision could fill vacancies, reduce mandatory overtime and improve morale.

In a unanimous vote, the county commission approved a three-part motion to offer a $10,000 hiring bonus for new rescue lieutenant hires, introduce 12 new jobs to the fire rescue budget — half of which are for rescue lieutenants — and open negotiations with the Fire Rescue Professionals of Alachua County union to offer the same bonus to existing rescue lieutenants. The new initiative could cost $1.07 million and will gain funding through the American Rescue Plan.

Though the motion passed with little disagreement, the commission in April 2020 deemed a 10% ACFR budget increase unfeasible. The three-part proposal, however, would be paid for with ARPA funds, and, if applied to the 2021 fiscal year budget the 10% change was suggested for, the maximum increase would be roughly 2.7%.

The approved plan is targeted at reducing workload, burnout and mandatory overtime by hiring and retaining employees, ACFR Fire Chief Harold Theus said during the meeting.

‘This is not a new issue’

While ACFR was working below capacity before the COVID-19 pandemic, a 21% increase in call load between October 2020 and July 2021 added mental and physical strife to the understaffed crews, Theus said.

In the first eight months of 2021, firefighters had 395 more instances of mandatory overtime than in all of 2015, according to an Aug. 19 letter written by Fire Rescue Professionals of Alachua County member James Clifford. Rescue lieutenants are assigned overtime in 12-hour increments added to their 24-hour shift.

“We’ve had times when we are fully staffed, voluntary overtime was sought after and mandatory overtime was nonexistent,” Clifford wrote. “Those times did not last long because our call load continues to increase.”

This frustration had been building for years, Clifford said.

“When you require so much work in a 24-hour period, and then you tell people they're not allowed to go home at the end of that, people start looking for other jobs,” he said.

Clifford was promoted to assistant chief of emergency medical services in October 2018, but he chose to step down from the position to district chief, he said. The guilt he felt from mandating overtime became detrimental to his mental health.

“It's just devastating to do to people,” Clifford said, “as well as to hear people say, ‘Chief, I'm going to get divorced over this.’”

In addition to the solutions offered by Theus, Clifford believes the department requires additional rescue units, he said.

Although County Commissioner Anna Prizzia voted in favor of the motion, she expressed concern in the meeting that ACFR may suffer further vacancies due to COVID-19 quarantines.

She said she had reservations regarding the low number of ACFR employees who reported their vaccination status. At the time of the meeting, only 36% of the staff had responded, and of them, just 81% had been vaccinated.

Theus said he has watched the stress of the rescue lieutenant position, which he held from 1997 to 2004, increase over his 27-year-long career with ACFR.

“Our rescue lieutenants see the worst of the worst each and every day,” Theus said. “Whether that's pediatrics in severe respiratory distress, sick babies or childbirth, vehicle accidents, gunshot wounds, stabbings, the everyday medical calls they go on — it's a lot they see in a day's time.”

COVID-19 highlighted existing issues and added hours to calls, Theus said. Fewer employees can interact with COVID-19 patients, and increased hospital wait times present additional stress for those who wait in the ambulance for available beds for their patients.

“You’ve been with this patient for an hour and a half, two hours, and it's close proximity,” Theus said.

Creech-Redding said she experienced this in August when she waited with a COVID-19-positive patient for nearly two and a half hours, wearing heavy protective equipment.

“I had sweat pooling on the inside,” she said. “It was steaming.”

She said she frequently conducts COVID-19 tests at the station and is worried about contracting the virus despite being fully vaccinated.

A statewide scale, a local impact

Theus said these issues are not isolated to Alachua County.

Due to staffing and workload concerns, the Florida Statewide Emergency Response Committee was unable to send ambulance strike teams to Louisiana to prepare for Hurricane Ida, Theus said. Out-of-county transfers were also suspended.

“We're all in this together,” he said. “Every agency I have spoken with, we're all short paramedics.”

Daniel Garcia, a Marion County Fire Rescue captain and president of the Professional Firefighters of Marion County union, said most days, 15 to 25 MCFR employees out of 175 per shift are on overtime.

“Like most of the other departments in the state, and even with what the county is trying to do to address it, we are sorely behind on units on the road,” he said.

Transports in Marion County increased by 27% over the past three months, Garcia said. The Marion County Board of Commissioners has a pending request for additional rescue units and will conduct a workshop with fire rescue management to finalize the agreement Oct. 21.

Creech-Redding said she and her fellow employees lift weights, compete on the Station 30 Xbox and cook through long hours. But one thing never fails to push the proclaimed “station mom” to the end of her shift.

“The thought of going home is very exciting,” she said. “My little boy — he's my little best friend.”

Even with the expectation of mandatory overtime, the stress of her position and the fog of fatigue, she said she wants the community to know ACFR will never hesitate at a call.

“Just know, we are coming,” she said. “If someone calls, we're going to come no matter what your problem is as quick as we can to help. That's our number one goal.”

Avery is a reporter for WUFT News who can be reached by calling 352-392-6397 or emailing news@wuft.org.
Previous Q&A: Trial Court Administrator Paul Silverman on Guiding the 8th Judicial Circuit Through Pandemic
Next The Point, Sept. 20, 2021: Alachua County Firefighters Are Dealing With Pandemic-Induced Burnout