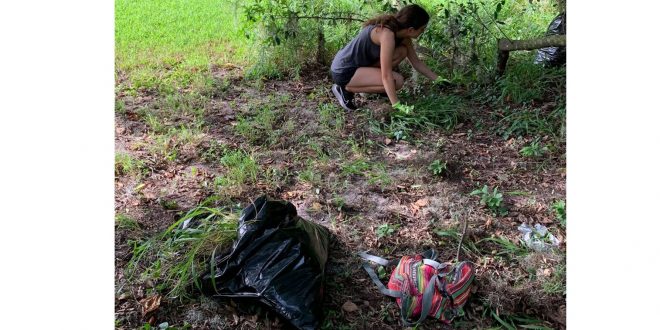 Brynn Fricke, 18, an environmental science major from Frisco, Texas, pulls invasive plants from the ground on the edge of the McCarty Woods conservation area during a cleanup on Aug. 29. (Abigail Hasebroock/WUFT News)

About 30 people gathered in the parking lot in front of McCarty Woods on Sunday morning with the essentials: trash bags, tools, gloves and glazed donuts.

The group — comprised of students, professors and children — was eager to work through the woods, located on the corner of Museum Road and Newell Drive on the University of Florida campus, to remove invasive plants.

The cleanup, which the Florida Museum of Natural History hosted, comes after UF reversed its decision to consider two of the 2.9 acres of the woods for development in the 2020-30 Campus Master Plan. The decision, approved in December but reversed on March 16, had been met with opposition from UF students and faculty who banded together in a movement that garnered protests, a petition and support on social media.

The cleanup on Sunday was the first of many planned efforts to strengthen the woods’ biodiversity, clearing out the area to make it easier to walk through and further reiterate the site’s value.

Douglas Soltis, a distinguished professor in the Florida Museum of Natural History and department of biology at UF, said the grove is only temporarily saved as its location in the center of campus. That location also makes it an attractive site for more buildings.

“We have to be aware of the fact that these efforts to cut down McCarty Woods will return,” he said. “But if we make it a better place for people to use, if we make it a place where they want to be and they have a great appreciation for it, I think its value will go up and the ability of those who would like to see it removed for a building, that voice may get harder and harder to promote as its value as a green space to the campus and community goes up and up and up.”

Soltis gave a presentation on June 10 to the Lakes, Vegetation and Landscaping committee requesting permission for the cleanup, and it was approved on Aug. 16. Soltis said he hopes to create cleanups that are open to anyone in the community about once a month.

Before the volunteers ventured into the woods, Soltis demonstrated which invasive plants to look for, such as “cat’s claw,” which is a vine that wraps around trees and smothers the ground. After explaining how to identify different invasive plant types, Soltis reiterated the importance of the sprucing efforts to prevent future development.

“We’re not out of the woods yet,” he told the group. “Pun intended!”

The student chapter of the UF Wildlife Society advertised the cleanup as its first event of the semester, and several members from the chapter arrived to help with the pruning. Among them was Vasilios Kosmakos, the president of the society.

Kosmakos, 21, a senior international studies and sustainability major from St. Petersburg, said he is applying for funds that would add signs with details on the plant species in the area and create more defined trails for people to enjoy.

“I hope it’s going to allow a lot more people that aren’t associated with the biological scientists to use McCarty Woods because that’s the whole point of this project,” he said. “This is a beautiful, core 3-acre forest on campus, I want people from all disciplines to go through here, to walk and really find the same beauty that I have in here.”

Kosmakos was not the only person from the former Save McCarty Woods movement hacking away at the invasive plants. Alexandra Scott, 19, a wildlife ecology and conservation sophomore from Tampa, also expressed a passion for preserving the woods, despite the Carpenter ant bite she endured during the cleanup.

Scott said she recently came to the woods for a practical plant taxonomy class to collect plants, and she hoped the university could understand how vital the area was for course instruction and recreation.

“If they can see that this space is of importance to that many people, and it’s worth cleaning up when it’s hot out and it’s early in the morning and people are still willing to come out here and clean it up, I hope that will prove to them that this space and others are really valuable,” she said.

By 10:30 a.m., a heaping pile of tree limbs, leaves, roots and trash bags full of litter stood tall on the outskirts of the woods. The perspiring volunteers celebrated by snacking on leftover donuts and guzzling plenty of water.

Lucas Majure, the curator of the herbarium at UF, brought his wife and two children to the event. Majure said he hoped for the cleanups to eventually expand to other conservation areas on campus.

“It’s nice to get people together and out into green space and sort of enjoy one another’s company and also do something great for the environment,” he said.

Now, the only conflict for the rest of fall is football.

“We’ll have to continue doing them when there’s not football games,” Soltis said. “We don’t want to try to compete with that.”