The stunning attack on the U.S. Capitol by a mob of Trump supporters roughly six months ago threatened lawmakers and came close to upending the process to certify the 2020 presidential election.

Most members of Congress decried the onslaught in the hours after the Jan. 6 insurrection, but since then the date has become a deeply polarizing moment on Capitol Hill.

After Senate Republicans blocked a bill to create an independent commission to investigate the attack, the House established a select committee to lead the probe.

The panel’s first hearing on Tuesday was emotional, as four law enforcement officers who defended the Capitol that day gave firsthand accounts of being overrun, assaulted and harangued by rioters as “traitors.” All described lingering physical and emotional trauma. Some rioters hurled racial epithets at African American officers.

The four officers’ gripping testimony, accompanied by horrific images from police body cameras played by the Democratic-led committee, did not reveal much new information. But it launched the investigation with a compelling reminder of what was at stake as the seat of the federal government came under violent attack.

Several times during the hearing both the witnesses and the some of the lawmakers on the dais teared up and struggled to gain composure as they relived that day.

Here are four takeaways from the hearing:

1. Officers point the finger at Trump for inciting supporters

U.S. Capitol Police Pfc. Harry Dunn said what happened on Jan. 6 was political, and that those participating had a mission: “They literally were there to ‘stop the steal,’ ” he said, using a phrase former President Donald Trump and his supporters invoked to falsely claim that the 2020 election results were illegitimate.

Dunn said he wants the committee to look at why rioters were there that day.

“If a hit man is hired and he kills somebody, the hit man goes to jail,” he told the panel. “But not only does the hit man go to jail, but the person who hired them does. There was an attack carried out on Jan. 6, and [someone] sent them. I want you to get to the bottom of that.”

Dunn, a Black officer who’s been with the department for more than 14 years, said he was called the N-word after acknowledging to rioters that he voted for Joe Biden for president.

Officer Daniel Hodges of the D.C. Metropolitan Police repeatedly used the word “terrorists” to describe those involved in the siege, and defended the term by coming prepared with the U.S. Code definition of domestic terrorism.

Hodges said rioters pledged support to Trump as they assaulted officers. He said they appealed to him to join their effort to take the building, and said they tried to “convert us to their cult.”

Florida Rep. Stephanie Murphy, one of the seven Democrats on the nine-person committee, revealed for the first time Tuesday how close the throng of rioters came to her and New York Democratic Rep. Kathleen Rice.

She described how the two lawmakers were holed up in a room in the basement of the Capitol, a location they thought would be the most secure in an emergency. But she said that the two were just “40 paces” from where Officer Hodges and others clashed with rioters attempting to breach the West Front entrance.

She told Hodges she could hear the screams of those being attacked just yards away. She said that without his bravery, and that of others there that day, “I shudder to think had you not held that line” what could have happened to her and others.

In the second Trump impeachment trial, earlier this year, the House impeachment managers showed video of then-Vice President Mike Pence and senators being evacuated from the Senate chamber on Jan. 6, minutes before many pro-Trump protestors walked into the chamber.

3. McCarthy’s move to boycott the panel leaves Trump without a defense

House Minority Leader Kevin McCarthy, R-Calif., made the call to pull all five members he named to the select committee after House Speaker Nancy Pelosi, D-Calif., vetoed two of them — Reps. Jim Jordan of Ohio and Jim Banks of Indiana.

Pelosi’s move was unprecedented because no leader had blocked another party from installing their members for a select committee, but she argued the statements and actions from Jordan and Banks made it untenable for her to accept them. The resolution creating the panel gave the speaker the power to block GOP picks.

Instead, Pelosi tapped two Republicans, Wyoming’s Liz Cheney and Illinois’ Adam Kinzinger, who both voted to impeach Trump and have been strong critics of the former president.

And they both used their platform during Tuesday’s hearing to argue that defending the rule of law was more important than loyalty to a political leader.

Cheney, for instance, asked Sgt. Gonell about Trump calling the group at the Capitol a “loving crowd.” He retorted that it was “pathetic” and he was “still recovering from those ‘hugs and kisses’ that day.”

McCarthy scheduled a press conference ahead of the hearing as a chance for GOP leaders and those he wanted on the committee to do a prebuttal. He said the panel was a “sham” and he and others at the event attempted to blame Pelosi for security failures at the Capitol on Jan. 6. None provided any evidence, and the speaker does not directly oversee the U.S. Capitol Police.

The GOP leader’s decision not to participate in the select committee meant that the three-and-a-half-hour-long hearing that was carried live by many news outlets did not include any GOP lawmaker defending the former president or raising the security issues Republicans say should be central to its probe.

No senior official from the Trump administration has testified in any of the hearings conducted by House or Senate panels to date, and without any allies on the select committee, the former president has no one defending him.

4. The committee could subpoena the former president and other Republicans

Chair Bennie Thompson, D-Miss., didn’t rule out subpoenas for Trump and other senior White House officials, telling reporters after the hearing, “We will follow the facts.” He indicated that the committee could schedule a hearing next month, even though the House is scheduled to take its regular August recess.

Cheney made it clear that getting testimony from those around Trump that day is essential. “We must know what happened every minute of that day in the White House,” she said. She has stated recently that Jordan is potentially a “material witness.” And McCarthy’s telephone conversation with the president that day, a topic that came up during the impeachment trial, could be something the committee wants to hear more about directly from the California Republican.

Rep. Adam Schiff, D-Calif., a member of the panel, told NPR on Tuesday that “we’ll do whatever is necessary to make sure we get the answers, and no one is off the table,” including the former president or members of Congress.

The Justice Department, now under the Biden administration, decided Tuesday that former government officials could not invoke executive privilege to avoid testifying about conversations with Trump or his advisers about the insurrection.

National Public Radio is based in Washington D.C.
Previous The Point, July 26, 2021: ‘I Was Misinformed,’ Says Unvaccinated Florida COVID Patient After Infection, Hospital Stay
Next The Point, July 27, 2021: FAQ On Whether To Start Masking Again If You Stopped

The 1st All-Civilian Crew Has Launched To Orbit The Earth 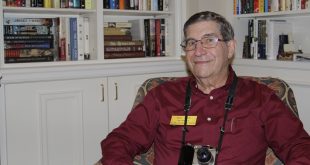 The Sept. 11 attacks happened 20 years ago, but Tina Billias remembers every detail.