• WUFT News: UF Health Shands Hospital Reports Highest Number Of COVID-19 Cases Since January. “On Monday, Shands Hospital announced that it had seen an uptick in COVID-19 patients within the past two weeks. Still, the current number of patients is half that of its peak in January.” Hear more about this story in today’s episode of our podcast.

• News4Jax: Lake Butler woman shares her near-death experience after contracting COVID-19. “‘I am 43 years old. Never in my life have I ever felt so close to death,’ Ganeene Starling told News4Jax on Tuesday about her time in the hospital. Starling said her family got COVID-19 because her husband, who is a captain at a prison in Lake Butler, was infected at work.”

• Mainstreet Daily News: Face mask policy dominates school board meeting. “Some parents who spoke at Tuesday night’s School Board of Alachua County (SBAC) meeting asked the board to heed the CDC recommendation for unvaccinated persons to wear face masks in schools. But a majority of commenters were against a mask mandate—with some threatening to remove students from the district if masks are required.”

• WUFT News: Alachua County Budget Increasing By Nearly $78 Million. “Despite the pandemic, a rise in Alachua County unemployment and a slow year for the local tourism industry, the Alachua County Manager’s proposed budget for the 2022 fiscal year showed an increase in revenue and spending.”

• News Service of Florida: Florida Appeals Court Refuses To Rehear Mask Mandate Fight. “A divided state appeals court has refused to reconsider a decision that raised questions about the constitutionality of a move last year by Alachua County to require people to wear masks to prevent the spread of COVID-19.”

Do you appreciate local journalism?

WUFT is here for you with vital coverage during complex times. We exist to serve north central Florida and are committed to keeping you up to date with the latest news from your community, the state and the world. If you’re able to do so, please consider making a donation to WUFT to keep us going strong.

• WFTS-Tampa Bay: Florida ranks 2nd-worst in nation for nursing homes staff vaccinations. “A new report by the AARP finds Florida nursing homes are the second worst in the nation for vaccinating staff. Data from the federal government shows 43.8% of nursing home staff is fully vaccinated. The national average is 56%.”

• WUSF: State Environmental Officials Tour Tampa Bay; Pledge Help In Fighting Red Tide. “The red tide that has killed hundreds of thousands of fish in Tampa Bay is now being found off the Pinellas beaches. State officials are working with local cleanup crews to spot and remove the dead fish as soon as possible.”

• Spectrum News: State panel begins work to uncover abandoned Black cemeteries. “Many of the Black cemeteries were established after Reconstruction, when Jim Crow-era segregation laws governed where African-Americans could be buried. Some sites were mishandled and ultimately consumed by urbanization. The recent discovery of the Zion Cemetery in Tampa is a prominent example, where ground-penetrating radar identified what are believed to be graves lying beneath a housing complex built in the 1950s.”

• NPR News: Miami Journalist Says She Sought To Give Epstein’s Victims The Chance To Speak. “When wealthy financier Jeffrey Epstein was arrested in 2006 following an investigation into his sexual activities with teenage girls, the case ended in a lenient plea bargain in which Epstein served 13 months in a county jail. Eleven years later, Miami Herald reporter Julie K. Brown decided to revisit the case, which she calls ‘a horrendous miscarriage of justice.'”

• Health: COVID Warnings From Washington Rise With The Uptick In Cases Around The Country

• World: Tokyo Olympics CEO Doesn’t Dismiss The Idea That Games Could Still Be Called Off

• World: How To Watch The Tokyo Olympics

• World: Ariel Henry Is Set To Be Haiti’s New Prime Minister. Here’s What To Know About Him

• Space: Liftoff! Jeff Bezos And 3 Crewmates Travel To Space And Back In Under 15 Minutes

• National: A Couple Is Charged In A Deadly Fire Sparked By Their Gender Reveal 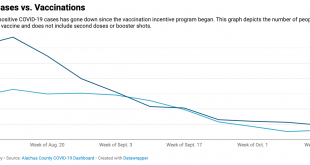 The Alachua County Commission voted to extend its vaccination incentives another month after a successful first month of the program.