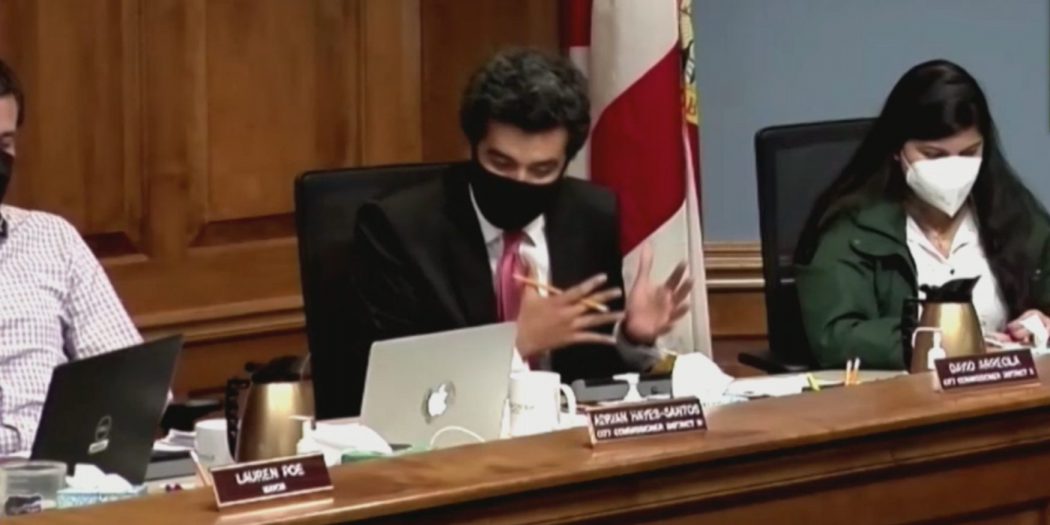 Gainesville City Commissioner David Arreola, sitting next to Commissioner Reina Saco, opposed the open container ordinance after hearing from Commissioner Desmon Duncan-Walker discuss how her district has been victim to gun violence and she does not want to support an ordinance for public drinking. (Courtesy of City of Gainesville)

The Gainesville City Commission is closer to allowing public drinking on the city’s sidewalks permanently.

A rule to temporarily allow open containers on any property owned and run by the city was initially adopted in September after businesses suffered from the pandemic. The ordinance was only in effect during the length of the state of emergency, which was lifted by Gov. Ron DeSantis in May.

At the city commission meeting on Monday evening, the vote to amend the ordinance to move on to its second reading passed with a vote of 4 to 3, with commissioners David Arreola,  Desmon Duncan-Walker and  Gail Johnson opposing.

Commissioner Adrian Hayes-Santos said that the open container ordinance was first put in place for police officers to target homeless people who would be drinking in public, and that there has not been any issue within the past year regarding this.

“The law is not a needed law,” Hayes-Santos said. “We shouldn’t just have laws in the books that are there just to be able to mess with people.”

Commissioner Reina Saco also said that open container laws would target homeless populations who do not have any home to go to drink their alcohol, and she said they are more likely to be stopped by police since they are drinking in public.

“I think this is a step in the right direction to get rid of that war on poverty where it’s not legal to exist as a homeless individual,” Saco said.

Arreola said it was important to “deal with the externalities” of the open container ordinance. He said the city and law enforcement cannot break up massive block parties that people throw because open containers are allowed, and not everybody is responsible with public drinking.

“I think at this point this is all contingent on people doing the right thing,” Arreola said. “It’s not harmful for someone to walk around with an open container. It is harmful for people to be disruptive, noisy and leaving litter.”

Duncan-Walker said she disapproved of the ordinance because of increased gun violence in District 1 and throughout other parts of the community, and she said that statistics show that “alcohol consumption affects different people” and heightens harmful behavior. These remarks from Duncan-Walker led to the rest of the hour-long discussion between commissioners on whether gun violence was its own problem or would be worsened by amending the open container ordinance. The Gainesville Sun reported that five teens were shot at Gainesville American Legion and five people were shot outside the 8th Avenue Food Store.

“While I think I understand the original intent around this, given where we are as a city, given the fact that we are not winning this battle with gun violence,” Duncan-Walker said. “I can’t put my stamp of support on something that statistics show will exacerbate violent behaviors.”

Mayor Lauren Poe responded that the correlation between violence and alcohol was not whether they use it in private or public, and he said that someone having a beer on a sidewalk is not a way to address problems like gun violence or increased sexual assault in bar areas.

The city commission will meet next on Wednesday at 1:30 p.m. for a special meeting about solid waste analysis.

Previous The Point, July 20, 2021: Is Gainesville A ‘Welcoming City’? Not Yet, Technically
Next UF Health Shands Hospital Reports Highest Number Of COVID-19 Cases Since January