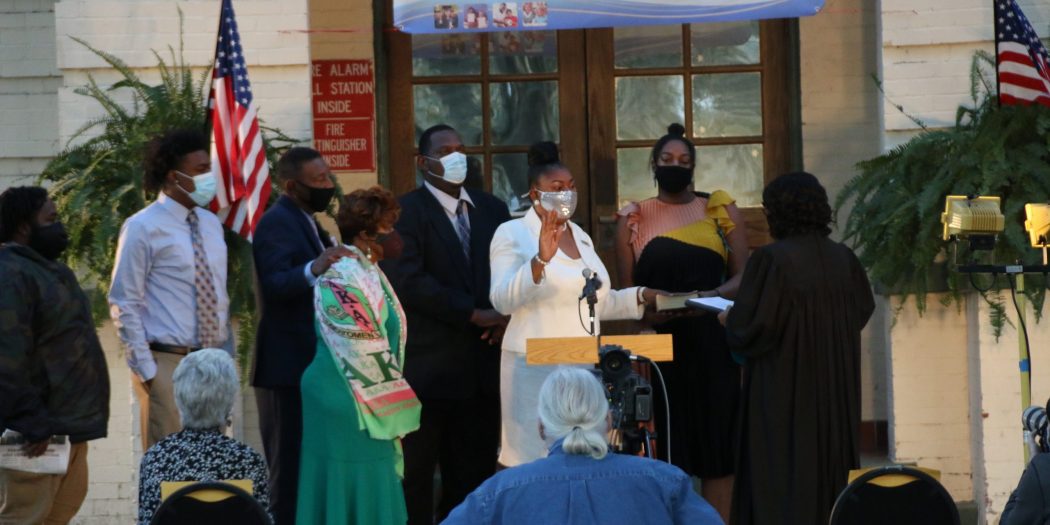 Diyonne McGraw participates in her swearing-in ceremony in November 2020. She is now at the center of a controversy regarding Alachua County School district zoning. (Tristan Wood/WUFT News)

An Alachua County Circuit Judge on Tuesday denied a motion that would’ve prevented Diyonne McGraw from voting as a member of the Alachua County School Board.

A group of plaintiffs filed a lawsuit June 10 against McGraw. The dilemma originates with her win of the District 2 seat in the August election.

On September 25, 2019, McGraw submitted her Statement of Candidate with the Supervisor of Elections, and in this application of candidacy, it confirmed her address as 4331 NW 21st Terrace, Gainesville, Florida 32605. McGraw represents District 2, but her residence is within the boundaries of District 4.

A group calling itself “Concerned Alachua County Parents” created a petition in opposition of McGraw’s candidacy. She continues to defend her legitimacy of her victory and tenure on the school board. Although her residing address isn’t within her district, she claims this isn’t her mistake.

“I was elected in good faith. I depended on the Supervisor of Elections office. I went through the state as well and was qualified. I was elected by 30 some thousand people,” McGraw told WCJB earlier this month.

She has also released documents as part of an argument that the voting precinct near where she resides should be a part of the school board district she is supposed to represent.

McGraw defeated Khanh-Lien Banko in the election. Jeff Childers, Banko’s attorney who helped to file the lawsuit, has said that claim has no legal merit.

The Supervisor of Elections’ response

The Alachua County Supervisor of Elections office responded saying that while its office provides guidance to all candidates, it is their responsibility to understand the qualifying requirements.

“Although the Supervisor of Elections Office does not have investigative authority,” its statement read, “it will work with the proper authorities or investigative bodies to share information as it is requested and needed.”

Circuit Judge Donna M. Keim denied this request for an emergency injunction Tuesday just in time for the scheduled board meeting that took place at 6 p.m. Keim ordered that the plaintiffs did not present sufficient evidence to show harm would be done by McGraw voting as a school board member.

Although Keim denied the request of a temporary injunction, the suit is ongoing.

Elise is a reporter for WUFT News who can be reached by calling 352-392-6397 or emailing news@wuft.org.
Previous UF Study On Antidepressants: Can Be Good For People, Bad For The Environment
Next A Year Before The Filing Deadline For Governor, Candidates File