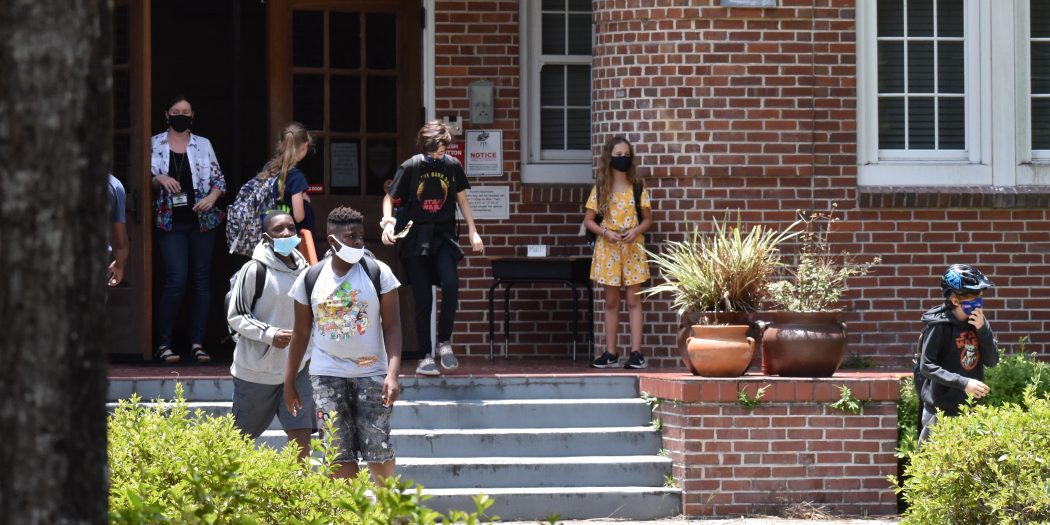 Jenni Van Hart’s high school-aged daughter went from being a straight A student to barely passing every class during the pandemic.

“It’s just hard when you’re sitting at home, looking into a screen, you don’t know your classmates,” she said. “It’s been hard as a parent to see her struggle and cry.”

Parents and experts worry about pandemic-related learning loss as national data show millions of students are falling behind. While there’s no concrete data currently available for students’ performance in Alachua County, several teachers and parents are noting deficiencies in students’ learning.

The district used preliminary data from its progress monitoring system in a different way than previous years because of the Digital Academy learning option, Berry said. This school year’s numbers show that a slightly smaller percentage of students are meeting expectations with variance in particular groups.

For example, 57% of third grade students met the target in the third quarter language arts assessment this year compared to 63% in 2018-2019. Students didn’t take assessments in the 2019-2020 school year due to the pandemic.

Van Hart’s daughter, a freshman at Eastside High School’s International Baccalaureate program, stayed in the Digital Academy because she didn’t want to enter a new school halfway through the year without friends. With support from her counselor and parents, her sole goal is to pass.

Van Hart also has a fifth grader at Norton Elementary who returned to brick-and-mortar classes. She enjoyed the challenge and independence of remote learning, especially how she had more time to skateboard after completing assignments.

But she felt frustrated when she returned to in-person classes. If one student acted up, all would be punished. Still, she’s performing well overall.

“I think that she probably isn’t as well prepared for middle school as she would have been had she been in bricks-and-mortar, but she was a happy student,” she said.

As with the uneven performance of Van Hart’s daughters, the school district will detect more variation in students’ academic development from the past year and a half, said Christopher Redding, an assistant professor of educational leadership at the University of Florida. Assessments, such as state and district testing, will be necessary to uncover where students are and what they need to target weaknesses.

Test results shouldn’t be used to rank schools or teachers, Redding said, but to instead make individual action plans for students. These plans should include clear goals to monitor student progress through a case-by-case developmental approach rather than strict remediation.

“It’s going to place a large burden on schools in terms of really addressing just not only academic needs, but the potential for trauma that’s occurred among students,” he said.

“All students haven’t experienced the pandemic equally,” he said. “For some, it’ll be associated with degrees of trauma and disconnection.”

Teachers were expected to master the art of teaching HyFlex, a format with in-person and online students at the same time, as well as online classes with limited support.

“It’s definitely been a difficult year to be a teacher,” he said.

The pandemic also affected learning for certain types of students, such as those with special needs or English language learners. Not all could return to in-person learning, and resources shifted into online formats weren’t tailored to their needs.

Spanish, Chinese, Nepali and Arabic are some of the languages that ring in Margaret Sabback’s Kindergarten classroom at Carolyn Beatrice Parker Elementary. However, the veteran English for Speakers of Other Languages teacher couldn’t resort to her usual tactics to keep the 5-year-olds focused.

Her classes fell back on center activities that would get students up and moving for a day of learning. But when classes moved online, she resorted to online dancing activities and what she called “brain breaks,” moments in which students would get up to move around.

Aside from their short attention spans, many students struggled as they learned about technology, Sabback said. At first, she had to figure out who didn’t have access to computers or spotty signal. She also had students who received no help — or too much help — from home, which proved to be a challenge.

“It’s kind of like performing, teaching Kindergarten,” she said.

Sabback went without a class aide this year. She used to have one who spoke Spanish as most of her students are native Spanish speakers.

“I only speak English, and my goal was to teach them English, but there are some situations where it’s really nice to have somebody helping you who speaks their language,” she said.

Her Spanish-speaking students rely on each other. They translate when needed and even teach her Spanish words. The return to in-person learning brings them together.

“Some students have probably found a new way to learn, and they might do better in a digital situation,” she said. “Some kids are so ready to come back to school.”

Like many of Sabback’s students, Sara Freeman’s first grader struggled going to class. He didn’t know how to set up Zoom or check his emails. Her fourth grader often helped him.

Throughout the pandemic, they missed their friends, routines and classes.

“They were eager to go back to school,” she said. “They couldn’t wait to get out of school.”

So they returned to the halls of Norton Elementary. Teachers reached out to Freeman, more than they did before the pandemic. Her first grader was offered a reading tutoring program. While her fourth grader didn’t fall behind, her grades fell.

In her four years of teaching geometry, Kelley Serravalle has seen students give up because they don’t like math. But this year, the number of demotivated students multiplied.

While Serravalle teaches regular and honors students at Gainesville High School, explaining geometry during the pandemic — whether online, in person or through HyFlex — was taxing.

“None of the digital kids want to turn on their computers in the sense of their screens, their cameras, and they don’t want to respond for the most part,” she said.

She graded and asked: “OK, did they cheat on this? Because their work doesn’t show any work anywhere but they got the right answer, but they have no idea how to explain it to me?”

Serravalle can reinforce concepts one-on-one with brick-and-mortar learners, but not for those online. While many online students struggled, some, especially those with health concerns, were productive.

A lot, however, tried and gave up. They went from missing lessons to disappearing. To Serravalle, it was almost like they didn’t exist anymore.

Simply put, they don’t put in effort. When a student was sent home to quarantine for two weeks, they would come back to school and try to catch up, but ultimately fall behind. In the courses she co-taught, students who needed more support didn’t produce the work necessary.

The dynamic of teaching — whether math, science or social studies — shifted, Robyn Rush said. The quality of instruction suffers through the HyFlex model.

“Teaching kids online simultaneously with children in the classroom is kind of like driving while texting,” she said. “It just wasn’t a wonderful idea for the educators who had to do two jobs and get paid for one.”

The veteran Mebane Middle School special education teacher is now helping her students unpack the trauma of losing a classmate. Delia Young, one of Rush’s students, went missing in early May. Two family members were recently charged with her murder.

But despite the challenges COVID-19 posed, not all was gloomy.

“There were, in some ways, less distractions if you were willing to take the opportunity to up your game,” she said. “And some teachers really did.”

Rush used online resources like never before. She paired her lessons with videos and cartoons, such as the Dr. Binocs Show. The program breaks down topics, like vaccines and viruses, to a primary level that many of her students can easily digest.

Even in her classes with students who only need a little additional support, she found ways to create good moments. Students would often email her to thank her for her efforts to provide one-on-one instruction in her small Zoom classes.

She anticipates the test scores from the math class she co-taught will be decent. Remote learning isn’t as good as in-person, Rush said, but teachers and parents found a way to make it work.

“What I saw was people just like ‘We’re going to do whatever we have to do to make the best of this horrible situation,’” she said.

And as the school year wraps up, the district focuses on filling gaps for those severely behind, especially for Kindergarten and first graders.

Throughout the pandemic, the district offered specialized intervention plans, which included after school tutoring, interventions and homeschool liaisons. Future programs are yet to be decided as the learning modes offered next school year await approval.

Officials hope this summer to roll out high-dosage tutoring, a model for tutoring in very small groups. Efforts at the elementary level are focused on reading fluency, and additional  personnel will be hired to run the initiative.

“Historically, we look at our data and try to make decisions, but with this year, it’s really difficult to compare it to other years,” he said.

Schools will identify those who are severely behind, but parents can contact their students’ teachers to decide if they may need extra instruction. Additional decisions will be made after state testing scores are available in late June or early July.