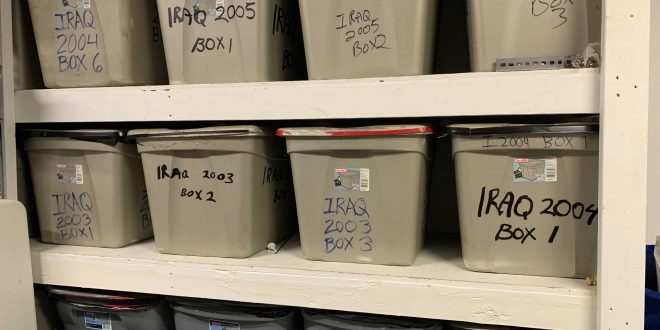 Boxes of tombstones are stored at the Camil residence this Memorial Day weekend, with each box containing the information of the names of lost soldiers. (Samantha Bailon/WUFT News)

For the past 13 years, Scott Camil has marked Memorial Day weekend by creating a display of temporary tombstones to honor American soldiers killed in the ongoing Afghanistan and Iraq Wars. This year, the Memorial Mile event is being held virtually on the Veterans for Peace website. It was released to the public at noon on Friday.

In non-pandemic years, Camil, the president of the Gainesville chapter of Veterans for Peace, would spend the day before the long weekend delegating volunteers from a tent on Northwest Eighth Avenue. This year, he was at his home on the edge of Micanopy, sporting a purple Veterans for Peace t-shirt while his two goofy black-haired dogs circled the whimsical property.

This year, the video commemoration shows a collection of photos and videos from past events.

Camil is a Marine Corps veteran who served two tours in Vietnam. Once returning home he sought a college education and learned about the false narrative the U.S government portrays war to the public, he said.

“When we talk to our kids about conflict resolution and how to solve problems, beating the other side into submission isn’t what we teach them,” Camil said.

He has since made it his life’s work to counter this objective. In 2006, he began planning for the first Memorial Mile.

The two wars have been ongoing for the past two decades. With no end in sight, Veterans for Peace brings the issue to light with their annual display of white-cardboard tombstones that stretch down Northwest Eighth Avenue every Memorial Day weekend displaying the name, death date, age and hometown of each soldier.

The organized display would typically take all night to build, and the amount of work rises alongside the death toll. On the bottom right of the tombstone is a number tracking the total lives lost, serving as an organized but saddening representation of the long wars.

At the first event in 2007, just over 4,000 tombstones were placed. Today, there would have been 7,028 tombstones commemorating American soldiers killed — an increase of almost 3,000 deaths.

“The tombstones give you the idea [of war],” Camil said. “Each one is personalized. Each one has information about where the person came from. We want the public to understand the true cost of war.”

Without the tombstones to set an alarming tone to passers-by, the organization decided to maintain a visual presence through a video presentation about the history of Memorial Mile.

“The video helps to tell the story of how it came to pass and [tells] the story of Memorial Mile that you wouldn’t have gotten before,” Rothschild said.

The presentation also features special appearances by Camil and the City Commissioner Harvey Ward describing what the event means to them.

“It impacts all our lives,” Ward said. “We all need to recognize it’s more than what’s on a spreadsheet. They’re human lives.”

The virtual Memorial Mile will be available to the public on www.vfpgainesville.org and will remain online for the foreseeable future.

Samantha is a reporter for WUFT News who can be reached by calling 352-392-6397 or emailing news@wuft.org.
Previous Marion County School Board Votes To Permanently Close Evergreen Elementary
Next The Point, June 1, 2021: Weekend Mass Shootings In Miami Leave Three Dead